Today started off quite early. 5am in fact, if I am honest. One of my neighbours was loading up their car and they were trying to be vewwy, vewwy quiet. Sadly when the items you are loading up are metal clothing rails on metal wheels, this can prove to be vewwy, vewwy difficult. Because we have been sleeping with the windows open (oh the heat, the damned heat I tell you) of course I woke up. Ping! There I was.

Thing the First: ascertain what on earth is going on outside that sounds like the Iron Chicken meets Godzilla.
Thing the Second: fail abjectly to go back to sleep.
Thing the Third: get up and wander about a bit with added fresh cinnamon coffee.

2 x triple shot espresso lattes later, I was rather more awake than I had been. I may have tidied and swept the sideway. I went into the garden and sat, enthralled, watching the bees in the lavender. I smelled the thyme, having already smelled the coffee a fair bit. 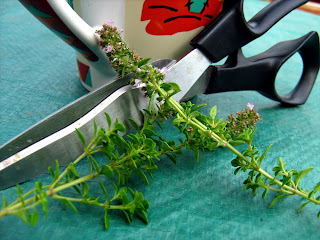 Then I remembered the piece of pork belly in the fridge that had to be dealt with as there was no room in the freezer for it.

Cue one piece of pork belly, rubbed with lovely olive oil and sea salt, and spiked with freshly cut thyme popped in the oven on a very low heat to cook gently away to its heart's content. It filled the house with lovely smells.

There is something rather satisfying about pork belly. Yes, it is a cheap cut and it is fatty but if, like me, you are into low carb and abjectly not low fat, then it is ideal. It is also one of the most flavourful cuts of all. For the last half hour turn the oven to grill, and let the crackling crisp up. Be smug that you have not set the thyme stalks aflame. Take a photo of your porcine triumph. 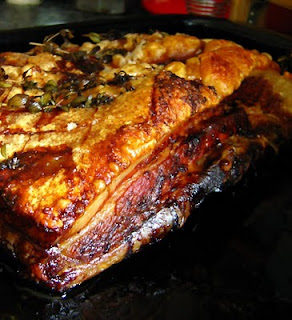 Posted by Lisa Cookwitch at 3:10 pm

I adore pork belly - I'm not really supposed to have much fat due to high cholesterol, but sometimes you just have to break free!

Tales from the Tiny Kitchen said...

hey Lisa. How long did you roast the pork belly for in total? I can never get it right - yours looks TO DIE!

Ladies, so sorry to have not realised you had commented!

Anne - um, I'm not sure. I cooked it on quite a low heat (Moderate / 325F / 160C / Gas 3) and I think I cooked it for roughly 4 hours. If it looked like it was drying out I turned the heat down for a while. I changed the oven over to grill for the last 10 minutes to crisp up the crackling.

Cooking pork belly on a lower heat for longer really seems to work.

Mac - I hear you. We don't often have it but, well...life's too short not to have crackling.