So. A challenge. The gauntlet had been thrown and for once I didn't chicken out and say "Ooof too much effort." Part of me - my aching back - still says I should have done and part of me also says that I should have stuck to recipes that I know and am used to. But when have I ever made things easy for myself?
In The Bag is a challenge set up by mischievous foodie people. Julie from http://www.asliceofcherrypie.com and Scott from http://www.realepicurean.com/
Essentially, they choose three seasonal ingredients, you then make a dish out of them plus whatever other ingredients you wish to add in, and then you blog about it.
This time it was mushrooms, nuts and herbs. Yay! Says I, forgetting that hubby is very, very allergic to mushrooms and so everything would have to be done with extra special care.
The only time I had to do it was this weekend, so onwards I went.
Kibbeh was in my head to make, bulghur wheat shells stuffed with, er, a stuffing, so I found a recipe from a noted expert and decided to actually follow that recipe to the letter. Not something I usually do but as this was for A Challenge I thought I should behave.
Ah ha. Ha ha ha.
I followed the recipe from here http://www.dedemed.com/index.php/Other-Recipes/Kibbeh-Recipe.html  but decided to do a mushroom, macadamia nut and parsley stuffing. I do have to say that the finished article tastes incredibly good but my art and design skills were somewhat lacking. The dough did not stick together well enough but here it is anyway.
Kibbeh Recipe :
Serves: 4-6 (more like 8)
Difficulty: hard (unless you chicken out and do a tray bake)
Prep & Cook time: 2 hours

Mushroom stuffing
1 bunch spring onions
100g pounded dry roasted macadamia nuts ( I just dry toasted mine in a frying pan and then ground them in a coffee grinder)
1 250g carton mushrooms
1 cup chopped parsley
Kibbeh Seasoning: (I made up a double batch of this so I had some for the stuffing too)
1 tsp allspice
1 tsp ground cumin
1 tsp ground coriander
1 tsp nutmeg
1 tsp white pepper
1 tsp cinnamon
¼ tsp ground cloves
2 tsp sea salt

For the Kibbeh dough, rinse the bulghur in warm water and pour off the water but leave some excess for the burgul to soak up, let it sit for about 2 hours. It should end up nearly dry and free running.
In a food processor, whiz the bulghur until it is dough-like enough to hold together. Remove to a BIG bowl.
Next in the food processor blend the onion, 2 cloves garlic and parsley, then put that in the bowl with the bulghur.
Next, process the meat until it is paste like. Into the bowl with that too.
Add the first batch of kibbeh seasoning and knead all the ingredients until well combined. Keep going at it, and make sure it is all mixed in well.
The mushroom stuffing was fun. Put ‘shrooms, parsley and a bunch of spring onions in the food processor and blend until it looks like paté. Transfer to a pan. Add in the macadamia nut paste and 2 tsp of kibbeh seasoning.

Dede says: “Next you can shape the kibbeh into balls or footballs and stuff them with the stuffing and fry them in vegetable oil or make kibbeh in a baking pan and cook in the oven at 350-400 degrees for about 35-40 minutes or until golden brown. “
So…I gave up on the idea of stuffing wee footballs as the dough wasn’t holding well enough and my back hurt, so I made two tray bakes. One with a mushroom, nut and herb stuffing and one with a beef, date, sultana and onion one.
My skills of dealing with the dough were not brilliant. I smoothed the dough into the bottom of two lined pans, added the filling then smoothed more dough over the top. It all looked fabulous when it went into the oven, but the edges curled up, akin to a burger, really, so it didn’t look right at all.
The TASTE however….bring it ON.
Next time I will use the larger bulghur wheat and less meat in the dough. I had enough dough over to make some patties, and those will be lunch for tomorrow.
This was fun, despite it being rather hard work and panic inducing, as I haven’t had a mushroom in the house for nearly 20 years, and I got seriously paranoid! I will definitely make it again but next time…next time don't make two damned things at once (three actually as I was roasting a leg of lamb at the same time) and also listen to my gut instinct and follow my little cooking heart. 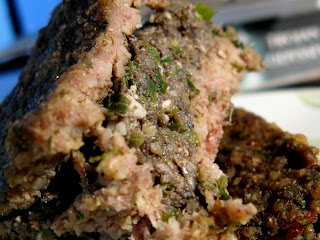 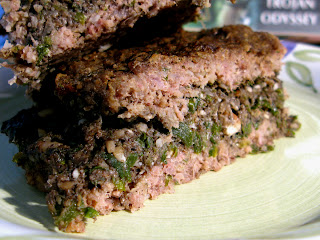 Labels: in the bag, kibbeh