This place deserves a hell of a lot more recognition than it gets.

Not only are their origins and their intentions both honourable and sustainable, the food they serve is absolutely top notch.

I had the great fortune to visit them last year with my friend Karen, and we just were agog at the quality and cleverness of each course that we had. By the time the dessert came along, we had no space in our little brains for any more squee but we oh boy found some when we tried the Malted Barley Ice Cream. It was like my childhood bedtimes in a bowl. Grown up Ovaltine with added sensuality. Karen had Apple Crumble Ice Cream and the noises of appreciation we made were audible to the chefs, who just grinned broadly when we pronounced the food to be "OMG AMAZING!" as one of them happened to walk by behind us.

Last week it was time to go again. I had a new person to introduce to the wonders of Acornhouse and I am glad to say that they did not disappoint. Acornhouse I mean, not, um. Anyway.

This time I had me New! Shiny! Phone! and so pictures were able to happen.

We were a bit late but they didn't complain, just sat us down and made us feel welcome. They fully appreciate that you will have trouble deciding what to choose. They brought us bottles of filtered water, free, and Col chose an organic lager by the name of Angel as they didn't have the cider. He tells me it was absolutely gorgeous and made up for them not having the Clementine Bellini that was on the menu. It certainly looked like a beautiful brew but I just cannot appreciate alcohol. I'll take his word for it though.

Col chose Field Mushrooms with Taleggio on Toast and I had Seared Scallops with Jerusalem Artichokes, Chillies and Almonds. (There is no photo of the mushrooms, as I was too busy tucking into my own starter and had also forgotten I had a cameraphone. It was a very distracted evening!)

The scallops were perfection personified. Silken centres still with the hint of sea, and a rich, caramelised outside, that bled dark golden juices onto the artichoke purée. The flakes of almonds worked well with the chopped chillies - no searing heat, just a warming glow and a fruity sweetness. I had never had Jerusalem Artichokes before but by golly I'll be having them again. 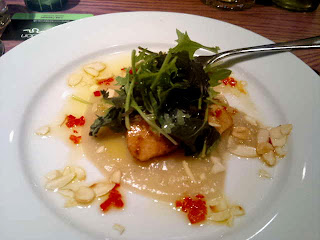 I tried some of my partner's mushrooms and they were also utterly delicious. Deeply garlicky and buttery but no harshness at all, even though there was a lot of garlic in there. The toast was chewy and dense, just the thing to soak up all the lovely juices.

After a  bit of a rest, the mains arrived. We probably should have had more of a rest because oh my goodness.

Col opted for the Confit Duck with Red Cabbage, Spiced Orange and Beetroot Salsa. I chose the Braised Mutton, with Pink Fir potatoes and Stewed Quince. 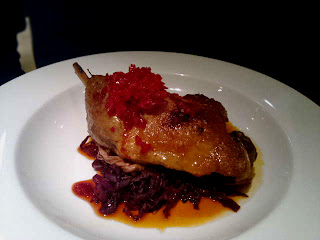 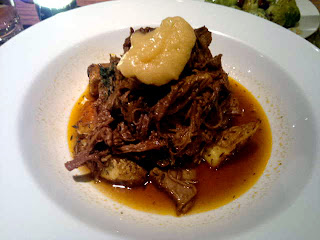 Everything was stunning. Out of the two I would say the duck was the more striking - it was so very tender, zesty and spicy, and we deemed it to be "Like Christmas in a bowl!" Every single thing in that dish worked together and created a gorgeous whole. I though Col was going to explode with glee, then I tasted some and did the same.

The mutton was rich, and deeply satisfying, and there was so much of it too! They had used rosemary and mint together, which in other things might have been too much but  the hit of a shred of fresh mint every so often added a zing that kept a very rich meat dish light tasting and easy on the palate. The quince worked with the meat extremely well indeed. A slightly grainy texture which contrasted nicely with the velvety mutton. Light tasting it might have been, yes, but there was too much for me to manage on my own so poor Col had to help me out. Looking back now I should not have ordered the side dish but dammit it was sprouts with honey and pancetta. I could not resist. My only complaint was the they could have been cooked a smidge longer, but each to his own taste with sprouts. Seggiano Chestnut Honey would have been amazing with them, but that's hardly locally sourced. 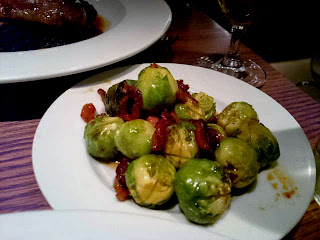 I had to admit defeat and didn't finish my greens, but I did give it a good go!

We were both far too full to even consider dessert, and in the end we settled up, and sloped off to lie down in a darkened room, groaning faintly and clutching our tummies.

I would urge you to give this lovely little place a go. They really are well worth the trip. They even tucked my scarf in for me as we left, making sure that I didn't get cold!

Squee sounds right! I must go!

I have been twice, and absolutely loved it both times. They are so sweet too! The building is a little hard to spot, as they are just a doorway in a seemingly blank wall, but the inside is warm and lovely. (First road on the left past The Water Rats Theatre Pub)