After many years of being a confirmed Christmas pudding hater, I finally tasted one that I liked. It took me by surprise I can tell you! Why did I taste it when I hate the stuff? Well, it smelled heavenly for one thing and for another, I have a habit of trying a foodstuff I don't like every few years or so, just to see if I have changed my mind. (Mussels? Still a definite NO on that one.)

This pudding wasn't the Heston miracle of candied orangeyness, though I admit I would like to try that to see what all the fuss was about - it was a Duchy Originals organic pud. (£7.99 from Waitrose)

Ma in law chose the steaming method to cook it, and the pudding was beautifully light whilst (in your face Campaign for Plain English) still being very rich and flavourful. Quite boozy tasting too though it didn't have any effect on me which I was quite grateful for. I am allergic, for want of a better word,  to alcohol, and usually the tiniest amount sets me off to feeling quite unwell but despite how boozy this pudding tasted, I was fine. We tried it first with custard and then with cream, and I think the cream won out. Custard made it a bit too claggy, but cold double cream was absolutely perfect. 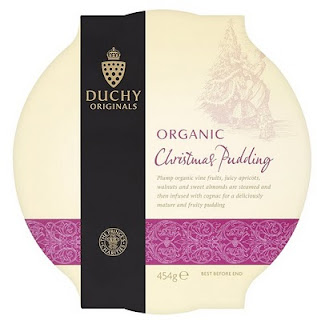