A few weeks ago I was lucky enough to get sent a box of cakes. Did you see that? Maybe I didn't type it loudly enough. CAKES.


Ho yes. Very yummy cakes they were too. I decided to do A Taste Test in the office and, oddly, everyone wanted to help out. They never seem to want to help with the filing but that doesn't come with a cherry on the top or a sugar paste scarf.

The red ribbon was ceremoniously cut, the hordes beaten back with a spoon and then I allowed everyone to try one thing. They were all quite well behaved because there was the promise that they might be allowed to try another one later.

We had Gingerbread George, Mincemeat Tarts and Black Forest Cupcakes. There was a bit of a scuffle but order prevailed.

Gingerbread George: so cute! This is a very hard gingerbread, and some people said it was too hard but dunking in tea or coffee sorts that one out! Very good dipped in a latte. He could have done with a bit more ginger I thought, (sorry George) but then I like ginger.

Black Forest Cupcakes: Oh my. I loved the look of these and really enjoyed eating them too. The hit of cherry sauce in the middle is luscious. The sponge was a little too dry and it crumbled but that was sorted out by dint of the OMG CREAM CHEESE FROSTING. One of the lads said that there was too much frosting but we didn't really agree. We just ate his second one for him. The frosting was sweet and creamy but stood up well to both a fork and a feckless George falling on top of it.

Mincemeat Tarts: now these were a total hit with everyone. The mincemeat was spiced generously enough and not sickly at all, which can be a problem with mincemeat. (Mr Kipling I am looking at you here.) Mincemeat is not meant to be a sickly, gloopy jam with a bit of peel in it, it should have body and oomph, and I speak as someone who made her own Actual Meat Based version. This version was just lovely. The almond slivers gave it a lovely crunch and contrasted nicely with the beautifully short pastry.


Look at happy, smiley George there with his tasty scarf. 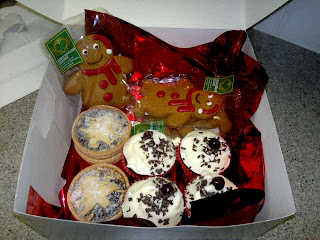 The tart! Lovely to look at and very good to eat. 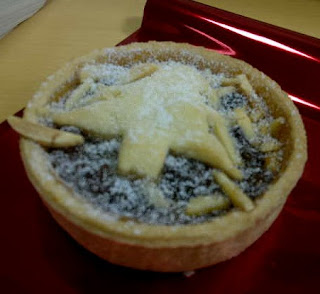 The Black Forest Cupcake. I blame the blur on the sugar rush shakes. 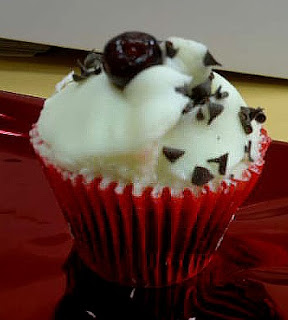 Thank you to Costa for creating a delicious Christmas range. I need to go and visit them now to get a slice of Chocolate Hazelnut Cake.
Posted by Lisa Cookwitch at 8:32 pm

Oddly enough, my colleagues were suddenly ever so pleased to help out when I took some Hotel Chocolat into the office for tasting!