Every so often, No 1 Boyfriend and I head to his place in Bexhill. A sort of a Pied à Mare I suppose.

We either go for a spot of much deserved RnR, where I squeak happily at the sea and have all the windows open so that I can fall asleep to the sound of the waves, or we go to utilise the much larger space for a photo shoot. Damn all this taking photos of our beautiful friends, life sucks eh?

Anyway. The two of us are both very much into good food. I just happen to be the one out of the two of us who's good at cooking it too. He is also king of the cheese based diet, so I feel it's a good idea that every once in a while vegetables or salads are presented, or food that is not served on a cracker is introduced. He does in fact like greens, though he'll not admit it until you poke him with a spoon and promise to put bacon with it or butter on it.

One of the times we stayed in Bexhill, we very much needed Lunch. Not just a quick snack, but your actual full on Lunch so it was decided that we should go to the local family run Italian café, Di Paolo, for it. They do amazing homemade Italian gelato (Great Grandad started off way back in the 1800s with a bicycle mounted ice cream cart!) but they also serve very good, simple food. I had a craving for fresh fish and chips, and they always have fish that has been caught locally.


We chose the table service area at the back of the café (through wooden double doors with checked curtains) because we could. The maître d' is a rosy cheeked young Italian chap with a charm offensive going on. He welcomed us in, and made sure we were comfortable. It is all so very...well, it's old fashioned and utterly appealing because of it. The waitress (skirt, blouse, sensible shoes and white pinny) took our order for tea, and then said "The young Sir will be over to take your order soon." We just love it in there. It is also the Sunday Lunch destination for many of the area's OAPs and the staff take very great care of them, knowing most of them by name and, possibly, ailment.

Young Sir (black trousers and waistcoat, white shirt, slicked back hair and a big smile) did indeed take our order. (I believe Old Sir, Papa, has retired.) Now, No 1 Boyfriend doesn't usually eat fish and chips outside of his twice yearly Whitby visits but on this occasion decided to take the plunge. He was well rewarded.

A pot of tea, some bread and butter, fresh haddock in a light, crispy batter and golden chips with the sea a stone's throw away and the art deco wonder of the De La Warr Pavilion visible out of the front window. Heaven. The fish was to die for, perfectly cooked and not oily at all. I did manage to at least take one photo of it before I wolfed down the rest of it but it was a struggle I can tell you. 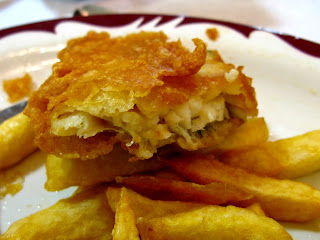 Dessert had to be done. We both chose apple and sultana crumble with ice cream. You can select any of their ice cream flavours to have so I picked their gorgeous vanilla with morello cherry sauce through it and by golly it is good. Smooth, creamy but with a nice tart spike of cherry every so often. It went very well with the rich crumble. Very generously sprinkled with brown sugar, and with hints of nutmeg and cinnamon, it was sweet and homely. Just fabulous.

I have eaten a fair few of their ice creams - their gianduia ice cream which is like Nutella and cream, frozen, is probably my favourite. 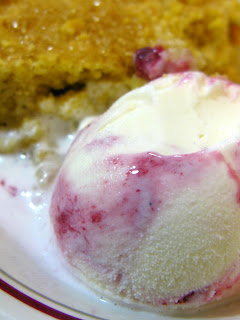 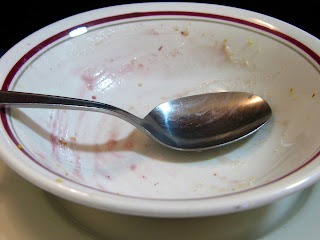 The bill was very pleasing indeed. As was the paper it was written on. It felt like they had a stack of them in the cupboard that they'd bought way back when they first opened. There is an old style comfort and civility in this place and I wouldn't change it for the world. 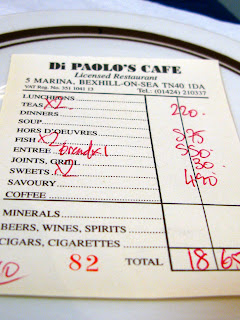 Posted by Lisa Cookwitch at 4:02 pm

That actually made me dribble a little bit. Yum.

*grin* Objective achieved. And thank you for not groaning at my pun at the start.