The last time that I went out to an evening dinner with C it was to Acornhouse and we had a very good time indeed. http://cookwitch.blogspot.com/2010/11/acornhouse-restaurant-kings-cross.html

Last Thursday, after an email conversation that went along the lines of "I have a hankering for French. Can you look at Open Table." and then a flurry of "Oooh look...." we ended up with a reservation at Le Garrick. I have never been, which is a travesty considering I work 2 minutes' walk away. I didn't actually know that I worked that closely to it, which is why, when we found it,  I was very embarrassed to have gotten lost on the way...okay so we were coming at it from a different direction but even so.

Anyway. It's a very small restaurant, and on a cold, cold night it was a lovely, cosy - dare I say romantic -  place to be.

Once the Very Loud Group of Media Types had finally vacated the narrow space between the tables ("Please move your bottom away from my face or I will have to take a fork to it.") and moved into the bar area, it become an even nicer place to be. The ensuing braying from in there had us both in hysterics after a while, with me wanting to poke my head around the wall and say "Damn it Marjorie*! Damn it all to Hell!" but I didn't because La fondue était arrivée.

Oh my. It was not the 1970s saucepan with a ton of unidentified melted cheese and Blue Nun in it. No. It was a whole Vacherin cheese, baked in its wooden box with a dash of white wine and fresh thyme until it was almost liquid.  We were given pieces of baguette to tear apart and dunk into the cheese and that we did with accompanying food appreciation noises. It was gorgeous. Rich and creamy but not overpowering, and as it cooled the edges turned delightfully chewy. We finished that off in short order, with Col graciously letting me have the last bit of chewy cheese. 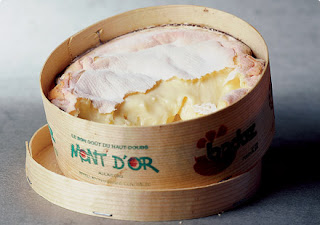 I did not take this photo. This is just to show you what Vacherin looks like in its wee box.

For the main course we had both decided on steak. Not just any steak though, oh no. It was on the menu as 'Entrecote grillée sauce poivre: 14 oz char-grilled 28-day hung rib-eye steak on the bone with pommes frites and the chef's pepper and cognac sauce.' They also offered béarnaise.

The waitress who looked after us was superb. Col had gone for blue and she said  "Ah oui, you want it still to moo? We will just pass it over the flame." and I chose medium rare as I like slightly more bite. Stop laughing at the back.


What arrived, gentle reader, was a 14oz beef chop. Quite possibly the tastiest beef chop I have had in a long while and I have eaten a lot of beef. Entrecote is, essentially, a rib-eye steak on the bone. Oh the joy of beef on the bone again! It was even better than the rib eye that I had eaten at Hawksmoor. Yes, really. The chef who cooked our steaks got them utterly spot on as to how we wanted them and the meat was as tender and juicy as any I have had at other, more pricey places, more so in fact. The béarnaise sauce which we chose to accompany the steak was also incredibly good. So many places don't get it right, and it ends up being a greasy, slightly vinegary glop more akin to cheap mayonnaise with a bit of greenery added but this...again, perfection. It was thick, and creamy but with the proper amount of shallot and tarragon. Tarragon can overpower but in this sauce, it didn't. Beautifully balanced.

The frites were as I have only had them in France. When the first frites you had were from a roadside stall in the mountains of France, every other plateful after that gets compared and these utterly lived up to the memory. Slim sticks of crisp, golden and salted potato, as perfect a pile of frites as I could have wanted. Belgo take note, that is what a plate of frites should be. Not a bowlful of frozen chips fried until they are vaguely done.

At this point I must apologise for the lack of photos as we simply dived straight in and only surfaced again when a steak induced coma was about to set in. I will state for the record that, as at Acornhouse, we simply had no room for dessert. We obtained the bill (I don't know what it came to but there ar eprices on the website) and then sloped off through the freezing night air to have a bit of a lie down at our hotel. One of us may have had a nap.

I will most definitely go there again, it was absolutely stunning. Anywhere that can cook steak that well is a Must Visit Again place in my book. Well done everyone at Le Garrick. You made our evening a very special one indeed.


*from the TV show A Bit of Fry and Laurie
Posted by Lisa Cookwitch at 2:03 am

They have marked the fish of the day as vegetarian which is a bit of a shame.

Kavey - it was gorgeous from start to finish. A lovely little place to go.