Those of you who are old enough will remember the colours of Mrs Slocombe's hair in Are You Being Served. I am old enough for this.

Today's recipe was inspired in part by my friend Mark making a white chocolate version of Nutella Cheesecake Brownies (which we christened Blondies), and a Gizzi Erskine recipe from a while back using sweet potatoes to replace the fat in a brownie recipe. Her brownies are rich and dark and very decadent. My version has turned out a lot lighter but that may be due to not using quite so much sweet potato. 500g of raw turned into only 300g once cooked so, er, oopsie there. Anyway.

A word of warning. Purple Mountain Sweet Potatoes (I found them in Tesco's Finest range) are rather more dense than other kinds. My old but  powerful stick blender actually got stuck so it was fork to the rescue and I had to add about 5 tablespoons of water to get it to a stiff puree. However, I had a hell of a lot of fun doing this, even if most things in my kitchen went purple. 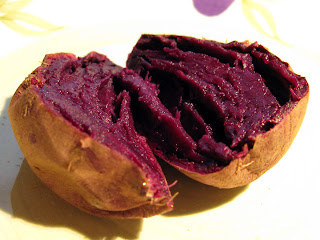 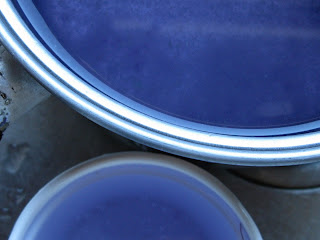 
Heat the oven to 160°C.  Line a square brownie tin with greaseproof paper. (I didn't have a square one, so my Slocombes are a bit on the thin side)
In a clean, dry bowl whisk eggs, sugars and salt until they become really voluminous and pale. This will take about 5 minutes.
Scoop out the sweet potato from their skins and mash with a fork to a puree.  Add some of the water if it is too stiff.
Fold this into the egg mixture. along with the chocolate, ground almonds, flour, chocolate powder, cinnamon and vanilla extract until it is incorporated. 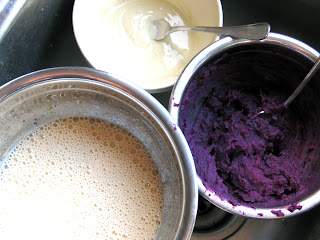 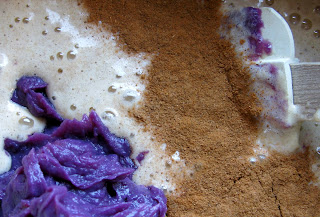 Add the choc chips if using.
Pour into the lined brownie tin and bake for 35 minutes or until the top is firm. 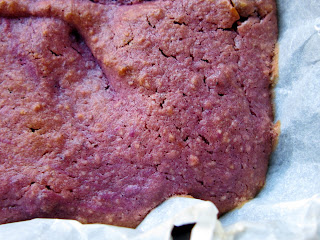 They are soft, and moist with a vaguely ice cream smell about them. Quite moreish it has to be said! Next time I think I'll use slightly more ground almonds and 200g of melted chocolate, not 150g. They possibly needed a tad more vanilla, but that might just be me. 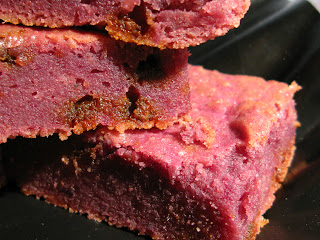 Posted by Lisa Cookwitch at 5:15 pm

Gosh these sound absolutely delicious I am going to give them a try on Thursday when I get paid :)

I am very interested in the purple colour, do you think it would dye things or does it easily wash off everything?

Going to definitely do a test with it to see what happens will post results on my blog end of the week.

Thanks for the recipe

I was wondering that myself but I suspect it would wash out. I got it all over my hands from peeling the cooked potatoes and it did wash off after a bit of a scrub. Maybe the raw peelings would dye?

yes I could try sinking some pre-mordanted fibre into a bucket or pot with soaking skins just to see what happens, if anything else it sounds like amazing fun to watch and try :)

Sometimes things like this dont seem like they are going to do anything but then when you add something acid it brings the whole thing to life and really drains out that colour which is sucked into the fibre or yarn. Cant wait to try I was just showing my daughter your delicious recipe as she will go get the ingredients on Thursday :)

I mentioned the purple sweet potatoes to a seamstress friend, who said that they could well be an effective dye.

Kavey - they taste really good too. :)

Pavel - they were such fun to make, and really very nice to eat as well!

wow what a vibrant colour! i gotta look out for these sweet potatoes never seen them! yum i shall make this for sure!

@Pukka - Thank you for your comment! Sadly I haven't seen them around since, which is very annoying, though I expect some of the bigger foreigh supermarkets maye have them. A trip to a big vegetable market may be in order. I did find an article about them here though: