Red meat and me.

A few weeks ago I had a bit of a disaster cooking some steak. It turned out tough and it had no right to be so, as it was very, very good rib-eye from Westin Gourmet. I began to worry that I'd lost my steak cooking mojo. I managed to forget about it for a while until Thursday of last week when I realised that I had been absolutely exhausted for a few days, far more exhausted than was usual for me. My lovely receptionist, Natasha, said "Eat some red meat girl, you look anaemic!" As soon as she said it, I could feel the craving for rare steak start and knew that I had to find some. I trudged around Covent Garden at lunchtime looking for a cow. There were many restaurants but I had no idea which one to go for, as I was in that brain fog place when you know you want food but there's no deciding what to have. In the end I bought a rare roast beef sandwich for lunch and bought some rib-eye to cook that night. Believe it or nor I was a bit worried that I'd ruin it again but...

Thankfully I managed to cook it perfectly and could actually feel it doing me good while I ate it. I decided to make a conscious effort to eat more red meat this week, as I seem to need it. I've managed to do that quite well with a steak and broccoli stir fry on Friday night and a deeply rich and gorgeous bolognese sauce (more about that later) on Sunday, roast beef or salt beef sandwiches for lunches and steak again tonight. Thankfully it does seem to be working and I feel a whole lot better than I did last week. I really must remember to stick to it. Oh the hardship of having to eat beef.

Tonight I found rump steak for 20% off at my local Coop so my eyes lit up and lo the steak was mine. I snuk in a piece of sirloin as well. £12 for three big steaks? Bring it on.

Take piece of steak.
Batter it with the back of a heavy knife blade (steak hammers tear it too much) and heat a ridged griddle pan until it smokes. (I used a non stick one)
Slap the steak down and leave it. Just leave it alone. I sprinkle a touch of sea salt on the surface.
When you can easily lift the steak with tongs, turn it over keeping the heat high.
I cut a slit in Husband's one so that I can check there is no pink but for me so long as it is seared on both sides it's just fine.
I held the steak in the tongs and rested the fat on the griddle so that it cooked through.
Served on plain buttered mash and called it heavenly.

This ain't just food baby, this is medicine. 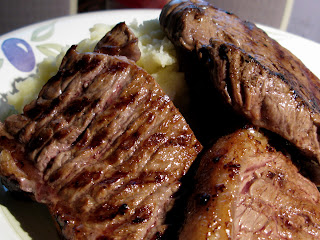 Glad the steak is helping with the iron levels.
Tasty too!