I just can't. It bothers me more than a lot of things - and a lot of things bother me. I am a member of this here website http://www.lovefoodhatewaste.com/ which probably explains a lot. We in the West have so much food, and throw away so much that could be used, it's almost a crime.


I came home tonight after a weekend away and find, just resting on top of the bin and still in their plastic wrappings, a whole bag of spinach with maybe a few wilted leaves, 2 carrots with nothing wrong that I can see, a box of mixed salad leaves that aren't great but would be utterly fine with a dose of good dressing and almost a whole stick of celery, maybe missing a few ribs.

I gasped. I actually gasped OUT LOUD. (There probably isn't much hope for me)

I am not too proud to use stuff that has been in the bin. If the things had touched anything else then no, of course not but they hadn't. They were all snugly wrapped up and just a wee bit tired but then aren't we all?

So now I have a pot of buttery, garlicky spinach rice simmering on the hob which will be lunch for tomorrow and Plans Afoot for the rest. The salad gets used tonight, one of the carrots will probably be grated into that and I will add a good, punchy balsamic dressing. The celery will get chopped and frozen for soup bases.

If I was at home tomorrow I'd probably make lamb, carrot and cinnamon burgers but I'm not, so I can't. Dammit.

Waste not, want not! I may not always succeed, but at least I try. I did reference my hatred of waste back in August of last year, and it doesn't go away.

And this was dinner. 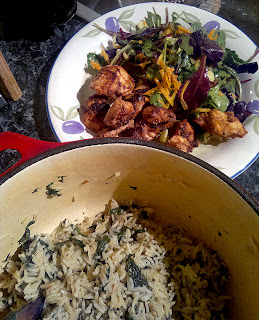 Posted by Lisa Cookwitch at 7:34 pm