This household has a love affair going on. It's not illicit, but many just don't understand it.

"How can you do that?" is a comment I often get. "We just don't get how that would work."

But work it does.

Our many times requited love is for cinnamon. That dusky brown powder, those curls of perfumed bark so often associated with the sweeter things in life and while I am not one to go against tradition too much, I do have a theory about this much beloved ingredient. It is neither sweet, nor savoury. It is a wonderful, neutral spice and that very neutrality means that it lends itself to many dishes and takes on the nature that is present.

In an apple pie it adds a sweet brown undertone, in a Bolognese sauce there's a subtle depth and added to the coffee in my stove top coffee pot, well, that's just lovely.

Tonight the guest that was to be bathed in all that understated glory was a fine, plump breasted chicken, purchased from our local butcher this morning. A roast chicken is always something of an adventure for me, and I like to try and do something different every now and again. There is nothing at all wrong with a chicken roasted simply, a sheen of olive oil on the skin and a touch of sea salt for added crispness but there are times when I want something slightly more spiced and fragrant.

No-one here likes much heat, so that rules out anything fiery but I wanted to get some spice under the skin of the bird, so I went for a mixture of garlic and cinnamon.

The smell of this whilst it cooked drove me nuts. I couldn't wait for it to be ready, and suddenly, it was. The flesh came away from the bones beautifully and I got to lick all the sticky juices off my fingers. Cook's perks, along with the 'oysters' that you find underneath the bird. And yes, I did wash my hands before serving the dinner up to anyone else.

The new season's asparagus, some plain rice with sweetcorn and that was it. I made husband a bowl of mixed salad as he doesn't like asparagus at all.

Loosen the skin on the breast of the chicken by working your fingers under it so that you have a gap between the meat and the skin.

Crush the garlic with a little coarse sea salt in a pestle and mortar until it is a paste. Mix in the tablespoon of butter and the cinnamon.

Take half of the butter mixture and place it under the skin of the chicken. I used a butter knife but generally I will use my fingers. Then smooth it out by pressing the surface of the skin down, making sure the butter goes as far as it can.

The remainder of the butter is spread over the surface of the skin, making sure not to miss out the legs and the wings.

Half a lemon gets put inside the cavity to create lemon scented steam and add extra moisture.

Drizzle a tiny bit of olive oil over the skin as well, as that stops the butter burning.

Roast for 20 minutes per pound but don't add that extra 20 that most instructions on shop packaging say to. It just dries out the bird. It's not needed. 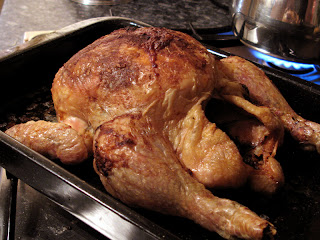 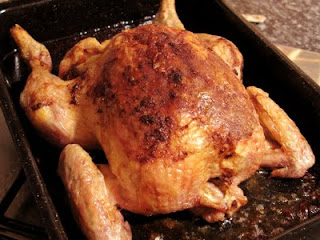 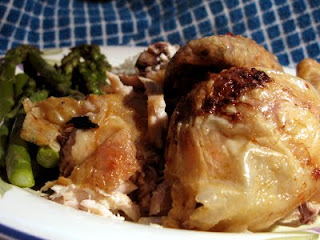 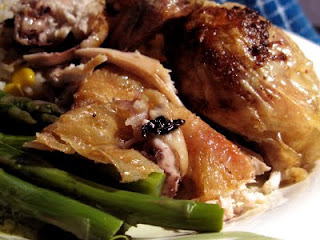 Why such a large chicken for just the two of us? You see, tomorrow, oh yes, tomorrow there are leftovers.
Posted by Lisa Cookwitch at 12:57 am