My poor Tall and Handsome Husband has been working dreadfully hard of late. He got home at way past 1am last Friday and he had to work on Saturday just gone as well. It’s just not right having to go to work on a Saturday after working a full week. As I waved him goodbye at 8.30am I thought “There’s a man who deserves a cake.” I’d already bought some big, fat British cherries from Marks & Spencer on Friday as they had a half price sale on selected fruit, so I went to the shops and got a few more to add to the pile.

I wasn’t sure what cake to choose first of all, I just wanted a cake with cherries in it. I looked at Madeira cake recipes, but I also wanted cinnamon in there because Tex likes that very much. I looked at Marble Cake but that wasn't right and then...Chocolate Cake! Yes, that would do nicely but what kind?

After a few internet searches, most of which led me to American sites with cakes seemingly made entirely of sugar with a few added cherries, it slowly dawned on me that I was sitting right next to a pile of cookery books. Doh! 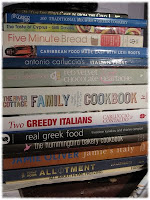 I looked in Rachel Allen’s ‘Bake’ and there it was. A plain and simple recipe for a chocolate cake using melted chocolate and cocoa. I had all the ingredients so off I went.

De-pipping the cherries was laborious, but fun. The cherries were a bit too big for the de-stoner, so they splattered and my sink - and my hands – ended up looking like there had been an awful massacre in my kitchen. Dark purple cherry juice was all over the place, but the cherries were finally rendered pipless. They went into the freezer while I made up the cake part, as a friend had told me that if you partially freeze them, they don’t sink in the batter.

The recipe is for a cake cooked in two sandwich tins. I, of course, being the contrary mortal that I am, didn't want to do a layer cake, so there was a flurry of checking on Twitter about baking a two tin cake in a single, deeper tin, (thank you @josordini and @sarahbakes_uk) then there was the melting of chocolate, creaming of butter and sugar, the adding of eggs and the folding in of flour. Then the cherries went in. Pour the lot into a prepared tin, and bake at around 160C for an hour, or until a skewer comes out clean.

It worked, and Tall and Handsome likes it! Yay! Thank you Rachel Allen, for making my cake a success. I’m sorry I tweaked it, but it did actually work.

Chop some of the cherries in half, and leave about 6 whole, if you have any whole ones. Place in a bowl in the freezer, as if you partially freeze them they don't sink in the batter.

Line the base with non-stick parchment or liner. I lined the sides as well because I'm paranoid that nothing I bake will ever come out of a cake tin.

Cream the butter and the sugar together until pale, then beat in the eggs, one at a time. This went like a bowlful of marshmallow fluff, which took me slightly by surprise.

Fold in the melted chocolate. I used a spatula to do this, much easier than a metal spoon.

Sift* in the flour, cocoa, cinnamon, baking powder, bicarb and salt and fold in with the aforementioned spatula. Try not to eat all the cake mix with a spoon.

Take the cherries out of the freezer. Arrange the whole ones at the bottom of the cake tin, mix the chopped pieces into the batter, then pour the batter gently over the cherries in the tin. (You really don't need to do this, you can just chuck them all into the batter. It was just me being pretentious.)

Scrape the bowl out with the spatula so no cake mix gets left behind and so you can lick the spatula.

Smooth the top with a spoon, lick the spoon, and pop the cake into the oven.

I baked mine for about an hour at 160C fan. The centre stayed liquid for a long time, which I suspect was due to the cherry juice.

It’s a very nice cake. Not overly sweet at all, which pleases me, and would go very nicely with some ice cream or crème fraiche. One for the @Make This Again’ folder. 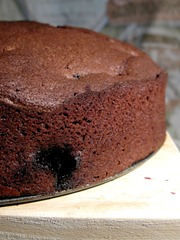 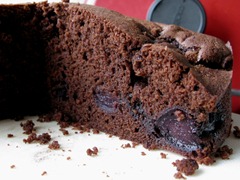 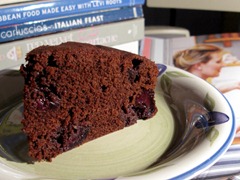 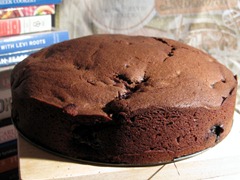 Oh and, by the way, it is quite nice for breakfast…

*I don’t sift flour. That comes under the heading of Can’t Be Arsed. What I do, however, is out the dry goods into a bowl and aerate with a balloon whisk. No lumps, no sifting required.

Posted by Lisa Cookwitch at 3:38 pm