Sometimes I feel like a real food blogger. Only sometimes, mind, as most of the time, when I haven't updated at all due to Life, or I'm not feeling the passion, coupled with the problem that I just do not have the time to attend all of the fabulous things that others seem to do, then I think I'm only playing at it. I am also very aware that this food preoccupation is very much a first world thing, and I feel quite self-conscious about it.

However, on Saturday 13th August I dragged Mr Tall and Handsome Husband to the house of the lovely Mr and Mrs Food Urchin. Having dinner at an actual supperclub made me feel part of the food blogging crowd again, as I was surrounded by people as passionate and as obsessed by food and cooking as me. It was gratifying to meet other people who read cookery books like novels. My wonderful Tall and Handsome Husband puts up with the house and the bedside table being liberally sprinkled with all of my books, and for that I am very thankful. He also puts up with my food and cooking fetish which, seeing as he is a man who has quite simple food needs, I am unbelievably grateful for. He's not a great one for crowds of people, preferring the quiet life, and I am still astounded that he puts up with me, being the significantly more noisy and sociable person that I am. Yes, yes, I know, I don't shut up unless I'm asleep.

After a small tussle with the SatNav, we arrived, late, at Food Urchin Towers. We wandered up and down for a bit, wondering which was the right house, until a nice neighbour took pity on us and said "You want the 'ouse party?" We nodded a lot. "Next door but one mate!" We said thank you, being the well brought up people that we are. As we approached the front door I could smell lovely cooking aromas, so figured we were definitely at the right house. The door was opened by the stunning Mrs FU. Drop dead gorgeous she was, in a beautiful floaty dress and wearing a Calm and Patience of a Saint aura around her shoulders. She made us both feel utterly welcome, and I presented my bounty of some Turkish bread that we'd brought along, plus a small tupperware with two halloumi mini quiches in it. They already had bread, but, as Mrs FU said, now they got to have some too! I was very happy to oblige.

Onward to the garden, where the Digging Up of the Lamb was about to start. I was very glad we hadn't missed the start, as the idea of watching Danny try to dig out the hole that he'd already had to dig through concrete and then fill in was oddly appealing, but then I’m horrible like that. 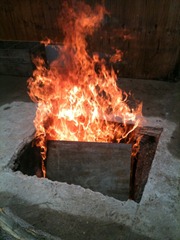 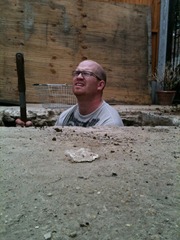 Photos courtesy of Mr FU himself.

Our very own Heston waved from the bottom of the garden, gave us a brief history of where kleftiko comes from, and soon a most valiant effort was going on, with the help of Dad, to exhume the two shoulders of lamb that had gone into the pit six hours earlier. The smell of the meat and the smoke was gorgeous. Suddenly one of the cats appeared out of nowhere but then thought better of it, so sat patiently on the trampoline instead, watching with avid interest as the lamb was raised. A quick carry of the two baskets up to the top of the garden and the Unveiling began. Even more smells wafted around the gathered peoples, and stomachs started to rumble mightily. 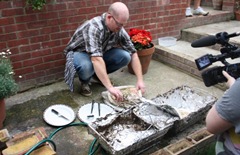 The Unveiling. Photos from hereon courtesy of sarahbb1, whose fab review is here:
http://eatsdrinksandsleeps.wordpress.com/2011/08/14/the-food-urchin-supper-club-buried-lamb-night/


It was nearly time. We all made our way into the house, and were seated by our hosts. Mrs FU is definitely the hostess with the mostest.

The starters came out, and soon we were all tucking into delicious home made baba ghanoush, taramasalata, houmous and tzatziki, accompanied by grilled halloumi and a lorra lorra bread. 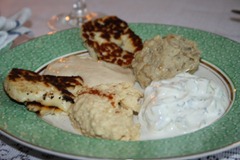 Please note, the taramasalata (inbetween the two slices of halloumi) is NOT PINK. This is right and proper and as it should be. It was all just perfect, and I happily scraped at my plate then stole what Tex didn't eat as well. This was my kind of meal, but then you probably already know that.
Next up, the star of the show, the kleftiko. Greek salad to accompany, and roasted potatoes with capers and onions. 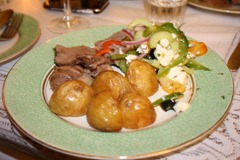 Beautifully flavoured lamb, tender to eat, and it all just worked. Us Greeks did know a thing or two about food. Just don’t ever lend us money. Unless you get a kebab in return for it. Perhaps. Danny did my ancestors proud. He’d probably have ended up promised the Favourite Daughter or something in gratitude for his lamb cooking skills.
We were nearing a state of Fullness, but we bravely ploughed on and OH MY GOD I am so glad we did for what came next was one of the nicest, most satisfying desserts I have had in a long while. 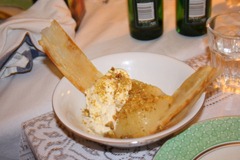 Pears poached in a delicate rose water syrup, with praline, pistachios, crispy filo strips and a beautifully silky ice cream. There was silence as bowls were scraped clean. It was heavenly, and I want to make it myself. Inspired by a recipe from the Tessa Kiros cookbook Falling Cloudberries: A World of Family Recipes, it was just bliss in a bowl. Yes, I drooled over the beeyootiful cookbook. No, I haven’t bought it. Yet.

There followed an evening of nattering, and discussion, and swapping food memories, plus a huge amount of cat fussing. Much enthusiasm was shown for ‘eating the whole animal’, but as we were sat in the very kitchen where The Pig Head Massacre took place, this is hardly surprising.

A few people had to leave early to catch trains, and I admit to feeling very happy that we only lived a short drive away, because I was having such fun.

I didn’t manage to catch everyone’s Twitter/blog names, but I’m sure we’ll catch up at some point.

HUGE thanks to Danny and Holly for hosting a bunch of reprobates, and also showing such enthusiasm for it all, and such kindness to us. I do believe a bloody good time was had by all, and I will definitely be going again if they’ll have me. I think Mr and Mrs FU have captured a place in my heart.

Oh, yes, and someone was brave enough to try the marrow rum – as written about here:
http://foodurchin.blogspot.com/2011/08/marrow-rum-update.html

Don’t worry, I think Paul aka @nonsenspipe is okay. If he doesn’t blog for a while I shall be checking up…

I cant believe I fell for those photos! Lovely meeting you me dear :D

Thank you Penny, I just cannot keep up with it as well as I'd like to.

P - but it was such a very deep hole! *grin* Lovely to meet you too. Your boiled ham and parsley sauce post just made me very hungry indeed. Happily, I have some cooked gammon here, so I shall not be hungry for long...

Thanks for the wonderful write up dahlink, was great to have you and Tex at FU mansions

Danny, it was our pleasure. I mean, where else would I have gotten to see socks like that?