Green Tomato Chutney and why I love Nigel Slater

I appear to be on a roll with the blogging. This is, truth be told, the first time that I have actually had the chance to sit down and write things out. Life has been fairly hectic of late, but I have done an awful lot of cooking – and an awful lot of eating out at restaurants!


The one thing that hasn’t gone so well this year is the garden. To be specific, my tomato plants. The plants were gifted to me by one of my managers, and I looked after them carefully. The weather, however, decided not to cooperate. At one point the poor things looked like they had the dreaded blight, and no-one wants that. It was touch and go as to whether they needed to be binned, but upon further investigation it seemed that, for once, blight was not to blame. Damp weather was. Hardly any sun, quite high humidity and there you have poor, sad, yellowing plants with black blotches on the leaves. After some consultation with my manager, I stripped off as many of the damaged leaves as I could, fed the plants ferociously, and hoped. The weather didn't really perk up much, so I ended up with a lot of green fruit. My poor pots have also been invaded by armies of slugs this year, and I lost a lot of what ripe fruit I had to those slimy devils.

Around the 9th of September, when it seemed that Autumn had swept her way into Essex trailing brown leaves, mists and gusts of wind in her skirts, I decided that chutney was really the only way to preserve what fruit I had left. Armed with rubber gloves, and a determined face, I wrestled the precious fruit away from the maws of juicy-looking well fed gastropods.

I ended up with around a kilo of green tomatoes and a few red ones. I set some of the green ones to ripen on the windowsill 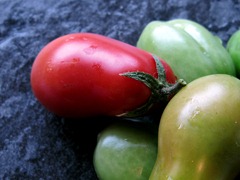 and then I did a web search for small batch chutney recipes. The internet did not fail me, in fact it led me straight to my beloved Nigel Slater where I read these words:

“I tend not to make gallons of chutney or jam or marmalade, but prefer to make smaller quantities, a couple of jars at a time.”

And that, dear reader, is why I love that man. Because I had a fairly small amount of tomatoes and only four jars. Thank you Nigel, you saved me again. (It’s not the only reason, obviously, Nigel’s writings just make so much sense.)

So. The tomatoes were prepped 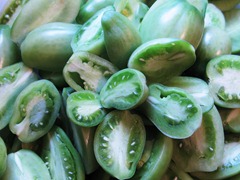 I rummaged in cupboards and found ingredients, hoiked out The Big Pan and off I went. I was a little nervous and kept faffing about. My Nan used to make hundreds of jars of chutney every year – green bean, apple, onion and beetroot, green tomato – so I was used to a kitchen overflowing with produce and a process that took days. I was absolutely delighted to find that it all went in one pot, and I could leave it on its own to simmer.

The pan of lovely things: 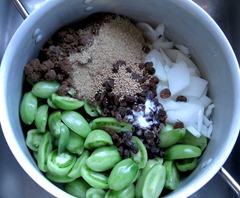 Put the green fruit, together with the onions, into a large stainless steel or enamelled pan with the sultanas, sugar, cinnamon, salt, mustard seeds and vinegar.

Bring to the boil, turn down the heat and leave to simmer for an hour, giving the occasional stir to reduce the risk of the chutney sticking.

Add the ripe tomatoes and continue to simmer until thickened. This took about 2 hours for mine, as the tomatoes threw out an awful lot of liquid. I also had to squash the tomatoes down a lot as green San
Marzanos seem to be incredibly resistant to cooking down, those little Italian rascals.

Spoon into sterilized* jars and seal. 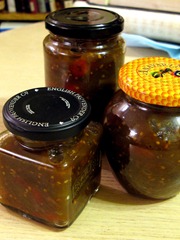 Yes, I know I said I have four jars, but three photographs better.

Thank you Mr Slater! Now all I have to do is wait a few months and then, cheese and chutney sandwich, you are mine.

Posted by Lisa Cookwitch at 9:37 pm

That looks good!
I've made small volumes of stuff before, particularly jams, where I've made half a jar's worth, but not bothered to put it in a jar then, just eaten over next few days!

I had a lot of green toms two autumn's back and did some chutney too: http://www.kaveyeats.com/2009/10/green-tomato-raisin-chutney.html

I'm impatient to try it.
Ooh, thanks! I have about 2kg of mixed tomatoes in the freezer from LAST year. Now I just need more jars...

that is a fab idea about using the dishwasher to act as a canner to preserve them. I don't usually find I need to with jellies, jams and chutneys because I fill very hot jars with very hot mixture, and seal whilst almost boiling, which causes a nice vacuum to form. But for things like elderberry syrup in the spring, I reckon this could be brilliant!

And now I have my new baby dishwasher, I can do that! Thank you!

oh and that's elderflower not elderberry of course! Oops!

The dishwasher tip came from someone else, years back. I tried it for some tomato sauce, and it worked!

Sorry not to be able to edit that comment for you Lynne!