I have a confession to make. I cannot make bread. Anything to do with yeast based cookery seems to fox me completely, and I just don’t have that ‘touch’ that some people appear to. It tastes okay, but whenever I make bread it always seems very heavy and dense. I don’t mind it, not really, but after one slice you generally want a lie down and a bit of a nap. I also have an innate dislike of recipes that take too long and look like a lot of faff. It comes of not being able to really stand up for any substantial length of time. Lots of step is fine, so long as they are quick ones!

I was watching Lorraine Pascale’s Home Cooking Made Easy, and she made what seemed to be a stunningly simply loaf called Pain d’Epi.  These loaves are usually shaped into an ear of corn, and look like this.

“I can make that!” I said to myself and then had to go out and buy the right flour before I could do it. Then I had to rewatch the show hurriedly before it disappeared off iPlayer, as stupid BBC decided not to put that recipe on their website.

I tried it today. My husband has been quite ill over Christmas, so I thought a nice loaf of proper, real bread would be a treat for him whilst still being a non-threatening food for his stomach. It’s worked incredibly well, despite some hiccoughs on my part when it stuck to the pan it was rising on, and had to be scraped off and reshaped. Oops.

Here be the recipe. Thank you Lorraine! I finally have an easy loaf for weekend scoffage, that doesn’t weigh everyone down.

Pain d’Epi (not quite, as I didn’t shape it in the end)

1 x sachet of dried yeast (I used Allinsons) the kind you add straight in to the flour.

Put the flour into a bowl.

Add the salt, yeast and sugar. Stir with a balloon whisk to air it a bit.

Add the water, and bring the mixture together with a knife, or with your fingers so it’s a ball of dough.

The dough will become pliable and elastic. Really, it will. If the yeast is live, it will work. You have NO IDEA of the triumph I felt when the dough turned elastic.

Shape it into a long sausage shape, and place on an OILED or LINED baking sheet (I used a non stick baking liner which is a godsend that I got from Lakeland) and cover with oiled cling film.

Leave it to rise in a warm place for an hour. (I don’t have an airing cupboard so I just left the oven open for a bit while the dough rested on the hob)

After an hour it will have doubled. Yes, I was very surprised about this.

I took off the cling film, snipped a decoration in the top with some scissors, brushed it with olive oil and popped it into the oven at 200C for 1/2 an hour.

(Lorraine said to get the oven hot and then add some water to create a steamy environment. I forgot. SEE BBC? You should have put the recipe and method on the website!)

Then I squeaked a lot as it rose even more.

1/2 an hour later, and I had a lovely, dense crumbed but springy loaf resting on a cooling rack – and no-one was more surprised than me.

I served it up with some home cooked ham that I’d done in the slow cooker with apple juice and cinnamon. 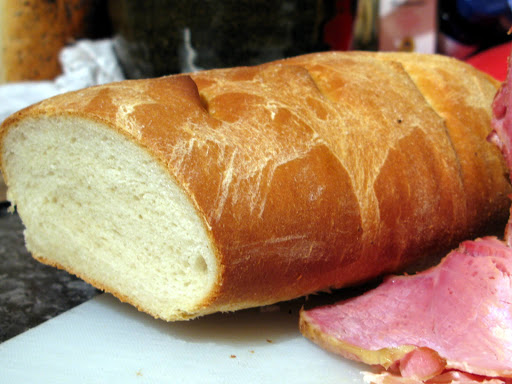 I even made one later in the traditional shape. 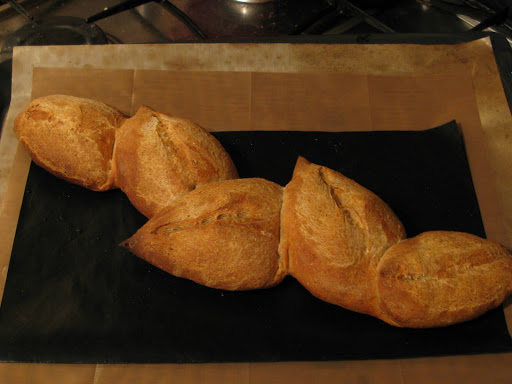 Congrats on your lovely looking bread. I keep meaning to make bread - not done it since I was a child and I really want to be able to bake bread!
Love the look of the ham too - bet you had lovely sandwiches today lucky gal ;)
Hope hubby is feeling better too!

This bread was SO easy I'm going to make more tomorrow. Might try half white/half wholemeal.

The ham was dead easy. I'll pop that up too while I think of it.

He's much, much better. I hope we get some sleep tonight!