Part of my usual cooking repertoire is ham, or gammon. As we are lucky enough to have a very good local butcher, I get it from them, and I usually buy an unsmoked slipper joint.  I liked smoked, to be honest, but the general House consensus is that it can be too salty so I go with the unsmoked.

I have bought a high quality, rare breed gammon joint before to try. Yes, I’m afraid I cheated on my butcher. I’m so sorry Mark. I hope you can forgive me.

I have to say it ended up being as dry as anything, despite me cooking it in exactly the same way that I always do, so I have returned to Mark the Butcher in good old Harold Hill, because he’s great. Mark is the kind of butcher that simply won’t stock something if he thinks it isn’t good enough for his customers. If he doesn’t have ribeye in stock, it’s because it was a) not good enough quality and b) far too high a price. A few weeks ago he stopped stocking oxtail because the price had gone up to higher than sirloin. Higher than sirloin steak. Can you imagine? Anyway, this is why we love him, and also because the meat that he stocks is always fabulous. Plus you get Cockney humour plus cooking advice when you go in, it’s great! This may seem like a blatant advert for them, but they are so worth it.

Where was I? Oh yes, cooking gammon.

Because Husband has been ill over Christmas, I didn’t cook the gammon when I’d meant to, and we had no freezer space to fit it in as a whole piece, so Boxing Day I decided to just cook it off in the slow cooker, then at least it would be ready to slice for sandwiches when Tex felt better, plus it would fill the kitchen with Christmas smells. As I was feeling woefully lacking in anything Christmassy at all, I felt that this would be a good idea.

I had found some rope lights upstairs, so I brought them down, draped them over the back door out of the kitchen that we don’t use any more, and brought Christmas to me.

It really was a very simple procedure, but the result was just lovely.

1 bottle Ringden Hall Farm apple juice, Spartan variety. (any pressed apple juice will do, or you can use sweet cider too)

That’s it. I didn’t pre-soak the gammon, because I forgot, hence me using the sweeter apple juice. It needed nothing more than that.

I set the slow cooker to auto and just left it be for 3 hours, then turned the meat over and let it cook for another 3. Turned the heat off, and let the meat sit in the stock for another hour. Lifted it out, then wrapped it in foil to sit and cool overnight.

It was absolutely gorgeous, and I will definitely cook it this way next time. I probably wouldn’t use the stock for soup though, due to my not soaking it. It might just be too salty. 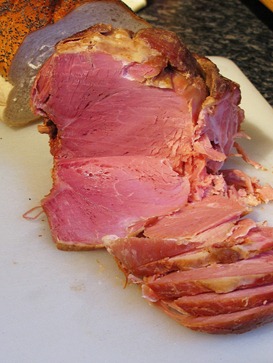 It went very well indeed with the Pain d’Epis!

Posted by Lisa Cookwitch at 6:28 pm