Seven years ago, I decided to have a go at making 'real' mincemeat. I saw it on a TV show and thought oooh yes. I love fruit and meat together so why not? I also detest most shop bought mincemeat so I thought making my own would make sense.

Thanks to a lovely lady called Barbara who transcribed the recipe from the River Cottage TV show for me I got started.

Mix these together (making sure to break up the mince - as he says, you don't want mini hamburgers in the middle of the pies!)

Then he added his personal touches:

I also added in a cup of chopped glacé cherries.

Mix all this together really well,  and leave for at least a week. I made some pies with it at the time and it was nice, then I packed it away in the fridge and, quite literally, forgot about it.

Seven years on and it’s STILL ABSOLUTELY FINE. I mixed in a good few tablespoons of dark rum as it did need more liquid, and then made Mediaeval Pies with it.

The Pastry by my friend Sue, though you can use whatever pastry you like.

Mix the sugar and flour together, add the egg. Add the butter and work until it’s at the fine crumb stage. Bring together with the water.

I used these amounts:

I will say that it made a very, very soft pastry, so I worked in more flour until it got to a rolling consistency then put it in the fridge overnight. It was a dream to roll out once it had warmed up a bit! Next time, FAR LESS WATER!

It is a very short pastry, almost like a shortbread in texture. 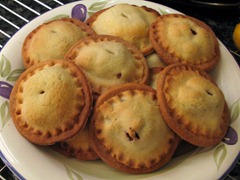 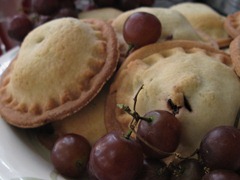 They ended up as flying saucer shapes because I didn’t have proper pie pans, and they are actually far easier to eat that way!

Apologies for the formatting here, I have no idea what’s going on!

I think I'm having one of my denser days... what can I say, it's Friday!

Does the lamb mince get cooked at the start of it - if so, what's the best way of cooking it? If not, what stops it going off?

No, the meat goes in raw. The sheer amount of alcohol and sugar is what preserves it. Once you have mixed it all together, you honestly cannot tell there is meat in it at all.

Wow great looking pies there, I like the saucer shape. I'm not a real mince pie lover but this sounds very interesting. Needs a tryout I feel, thx :)
Happy new year!

Ailbhe - I really dislike shop bought mincemeat and pies. This has a milder taste, and isn't as sickly. I couldn't leave them alone! Just as well I only made a few. :)

The addition of dark rum to loosen it really worked a treat.

Personally, I actually like the "aged and rum'd" version more than the original!

@ Simon - I preferred it too. Though I don't want to wait seven years til the next lot of pies!

Fascinating! Unfortunately as alcohol is utterly verboten these days (epilepsy medication) I won't be able to try it, but it still looks amazing :)

Oh Helen, that is a shame. I suspect you could make it with apple juice for the liquid part, it just wouldn't keep as long.

Have just seen this after subscribing to your blog - glad you liked the pastry. You can use it as shortbread too. It is nice cut into fan shapes to have with icecream.

I make my own mincemeat from Delia's recipe (but tend to use veggie suet as we sell pies at the village hall at Christmas and there are lots of vegetarians). I made a mistake with the batch I made this year. Short sighted fumbling in my cupboard meant that I used allspice instead of mixed spice. The result is strangely savoury but with the kick of the fruit and armagnac. I suspect it would work very well with meat suet and/or lamb mince.

Leaving the link to the show here: http://www.channel4.com/programmes/river-cottage/on-demand/27817-001