No, it’s not a new swear word, it’s a cookie. A very, very good cookie, first made for me by my dear friend Denise when we stayed with her in New England. A whole new world opened up to me – the world of American cup measurements. In some ways I find it easier, and in others…I’d much rather have a set of scales to hand. It probably just depends what side of the bed I got out of.

Buttery, cinnamony, sugary cookies with a melt in the mouth texture. My husband loves them, and he’s going away for a week tomorrow on a course for work, so I thought I’d make him some to take with him. A little bit of home in a tin.

Oddly, after extolling the fun of American cup use, I wanted to make these using a scale. The reason being that it is awfully cold in my kitchen at the moment (2 outside walls) and the butter will NOT soften to the right consistency to measure it with a cup without bending the handle, so scales it was. I managed to find a recipe using British measurements and off I went.

http://www.theamericanresident.com/2011/10/snickerdoodles-the-amazing-anytime-of-the-year-cookie/ is where I found the recipe, but I made a few tweaks. Come on, it’s me, that always happens, plus I remember some of the ingredients in the recipe that Denise used so I wanted to get as close to her recipe as possible.

Snickerdoodles
375g self raising flour
1/2 tsp Cream of tartar
1/2 tsp baking soda
1/4 teaspoon salt
1 tsp cinnamon
150g butter, room temperature
75g lard (or white Flora but lard was all I had)
280g caster sugar
2 large eggs
For rolling the cookies in:
1 tablespoon ground cinnamon mixed with 2 tablespoons of caster sugar
Method
Preheat oven to 180C.
Sift together flour, cream of tartar, baking soda and salt into a bowl.
Put butter, lard and sugar into another bowl. Use an electric mixer to mix them for about 3 minutes, until fluffy.

Mix in the eggs with the butter, lard and sugar mix. Reduce speed to low; gradually mix in the flour mixture, upping the speed as needed.

Shape the dough into balls of about 1.5 to 2 inches depending on how large you like your cookies. I made mine about the size of a walnut.

Try and get them into the sugar/cinnamon mixture soon, rolling them around to get completely covered in cinnamon and sugar. I found the chilling the mixture made it a lot easier to handle, and all I had to do today was open the window a bit!

Place the dough balls on cookie sheets lined in baking parchment or a non-stick baking liner. They will spread out, so I placed them about 1.5” apart.

Bake until edges are golden. That took about 10-12 minutes for my ones. Obviously the bigger you make them, the longer they take.

It’s not a problem if you overcook them a bit, but the longer you cook, the less of a chewy centre they have.

Once they are out of the oven and on a cooling rack, then you face the problem of not eating them all while they are still warm.

I promise you that there will be photos soon, but I have managed to drop my SD card into the body of my computer tower because I’m a numpty. The link above has photos, so you can pootle over there and have a look.
I can’t believe I did that.

EDIT: Thanks to my wonderful husband, the card has been retrieved, so here is a photo of Snickerdoodles. At last
. 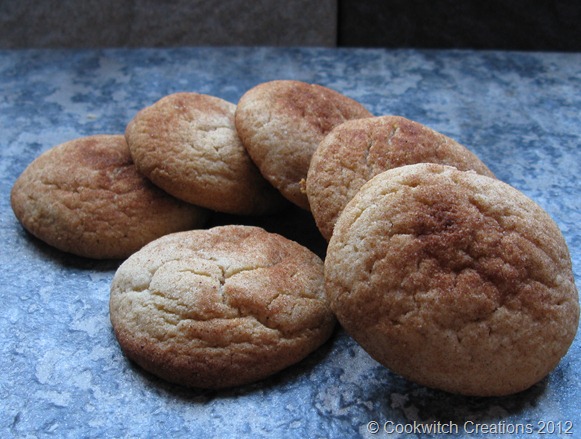 Snickerdoodles have the best biscuit name ever – you can't help but want to make them. Even if I do have to get over the disappointment that there's no chocolate or peanuts in them. I forget this every time.