British Pie week was a long while ago, it seems, but I have been very lax in writing up this recipe. Actually I’ve been very lax in doing anything to do with blogging as I’m back at work now, and by the time I get home my brain is bleeding out of my ears. I should have written up many posts whilst I wasn’t working, but then I felt guilty if I did anything not related to job hunting.

Anyway, back to the pie.

My butcher had some delicious looking oxtails in, and so we nabbed them while they were cheap. Well, I say cheap. Oxtail is no longer the cheapest cut, because the demand has gone back up, but it is still a very, very tasty piece of beef and well worth the effort that it takes to prepare. It’s a rich meat, and produces the most beautiful jellied stock. It’s just a bit time consuming.

The first step was to cook the pieces of oxtail so that I could get the meat off the bone.

I found my two biggest stock pots and set to work.

Trying to brown oxtail pieces is hard work. They stick to the bottom of the pan like mad. There was a tussle. It was Woman v Food for a while but ultimately, Woman won.

So, having fought with the oxtails to get them browned, I added water, salt, carrots, celery, onion and garlic into the poaching liquid. Oh and a bay leaf. I’m never sure if they add anything, but I’m loathe to leave them out just in case. I mean, they might be the base of all stock flavour! That done, I just left both pots to simmer for a goodly while. I think it was about three hours, long enough for the meat to fall off the bone, albeit with a little prodding.

While the ‘tails had been braising, I had been reducing a bottle of red wine. 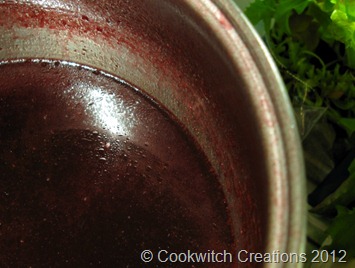 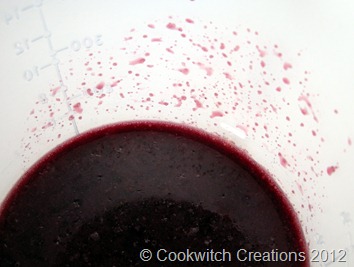 The smell was intoxicating, and made for a pretty heady kitchen atmosphere.

I spent a fair while getting all the meat off the bones. Oxtail has lots of little pockets for the meat to hide in, so there was a substantial amount of poking that went on.

Soon it was done, and I packed it all away to make the pie the next day.

These were my filling ingredients. 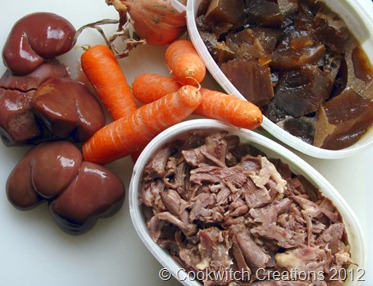 Carrots, more shallots, big fat juicy kidneys, the shredded oxtail meat and that lovely jellied stock. Here, because I love you, (yes, even you at the back) you can have a close up of the stock in all its shiny, wobbly glory. 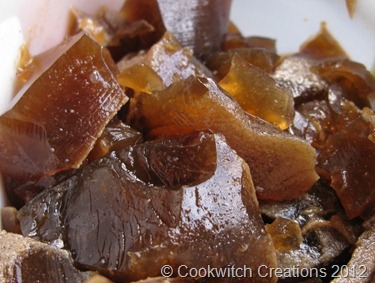 So off I went. Sautéed the shallots in olive oil. Inhaled the smell for a bit, happily smiling. The smell of shallots or onions frying in olive oil always takes me straight back to holidays in Spain as a child. 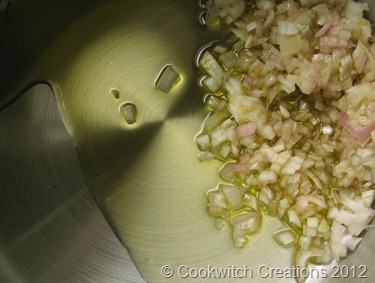 I added in finely chopped carrots and crushed garlic, then when the carrots started to soften I popped in the chopped kidneys and all of the tail meat. Warning: oxtail meat congeals when cold, so when you try to tip it in what you get is a girt great lump of coobeastie  that falls in to the pan, so be careful of the oil that splashes back out at you. Don’t say I didn’t warn you.

I broke up the meat and mixed it well, and then added the stock.

I let that cook for about an hour at a gentle simmer, then added the ingredients which would give more depth to the flavour.

One of those beef stockpot things to add more colour, and a bit more of a beefy bang. The red wine reduction went in, plus some squares of very dark chocolate. A touch of cinnamon, some dried oregano – only a touch – and then added salt to taste and left it to simmer for another hour. Right at the end I added some petit pois for sweetness and to break up the richness of the meat. 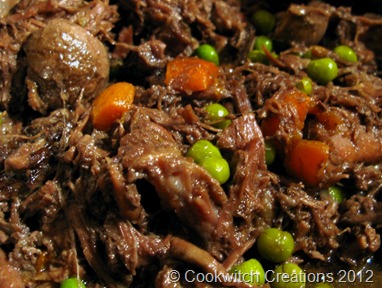 I had made some shortcrust pastry earlier, so I lined a pie dish with that and baked it blind for 15 minutes. Once the filling had cooled a bit, I mounded the filling in, and topped it with the last of the pastry (next time I am SO using puff) and brushed it with beaten egg. For once I remembered the egg! 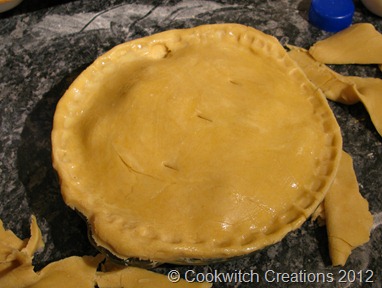 Into the oven for another 30 – 40 minutes until the pastry was cooked through and golden. 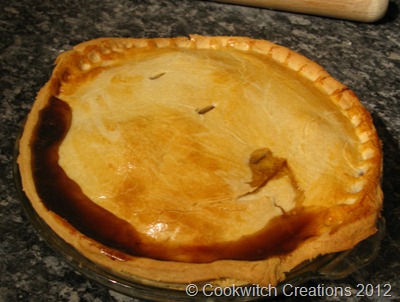 I am NOT GOOD at tidy pies. I am, however, good at FULL pies. Look how quickly that stock starts to gel again, I’d only just cut a slice! 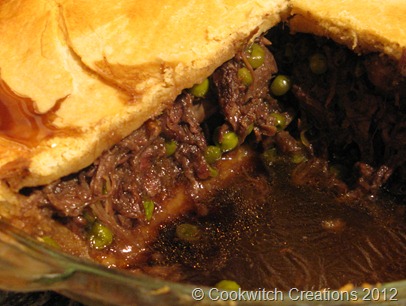 The one thing my pies very rarely have is a gap betwixt pastry and filling. 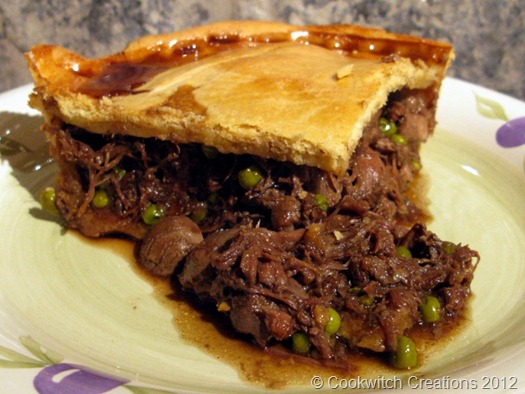 Would I make it again? Yes.

Would I make the filling ahead and keep it in the freezer for Emergency Pie? Definitely! In fact I may have some in there now…

Looks pretty delicious to me!

this looks great. i made an oxtail pie recently which turned out pretty well too. i like your idea of adding a little cinnamon. i used juniper berries in mine which were good. I also recommend you try my method of really slow cooking the oxtail - http://foodallways.blogspot.co.uk/2012/10/a-very-slow-cooked-oxtail-pie.html

Thank you Tom and Liz.
Beef and cinnamon are such a staple to me, that's my Cypriot roots showing. :)

Your pie looked gorgeous - and that pastry looked divine.

I went looking for an oxtail pie and this is definitely the best looking one I spotted! Like the chocolate addition.

@ Foodycat - it was so worth the effort of making it. I had so much filling left that we had another dinner out of it, served over plain rice.

That's what I am hoping for! I have loads of oxtail, so a goodly amount should survive for another day!