I have a love affair with Indian food. I grew up in a multicultural part of London, and almost all of my friends were Indian, but from very different areas, and so I grew up eating the most wonderful foods. Amazing Gujarati vegetable dishes,  zingy Punjabi stews and keema with peas, pakoras and spicy chicken in the Sikh households, meat dishes rich and full of cinnamon , nuts and sultanas in Bengali houses and  absolutely perfect rice in all of them…mine was a blessed childhood.

It did get to the point where I had trouble remembering the English name for things, and got mistaken for being Indian a lot of the time. This lead to being told off once by an Aunty at a wedding because I “didn't speak my own language.” The poor lady was mortified when she was told by my friend, amid much laughter, that I was Anglo Greek, not Anglo Indian. She spent the rest of the afternoon feeding me freshly cooked spinach pakoras as a penance. Oh woe is me.

Given my early obsession, it should come as no surprise that I jumped at the chance to attend a masterclass at La Porte des Indes in London.

I have to extend my thanks, once again, to my lovely friend Kavita for asking me along to this event. Not only am I blessed with amazing friends, I am blessed by friends with excellent taste.

I arrived stupidly early at Marble Arch, so I had time to grab a coffee and read my book whilst waiting for the appointed time. I’m quite nervous of going in to new places on my own, and when there was no-one to greet me I was a little shy of just wandering down the stairs just in case they were the wrong stairs and I ended up somewhere I shouldn’t be, but I did it anyway and arrived at the right place. 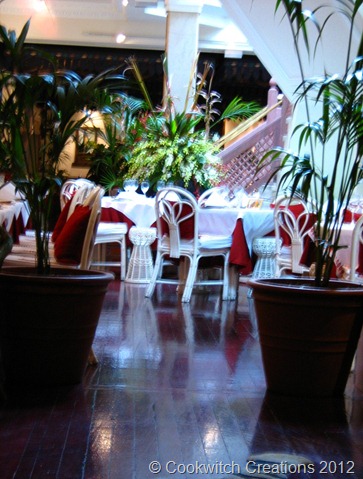 We were served a gorgeous drink made from passion fruit and guava which stubbornly refused to be photographed by my camera, which is a shame, because the colour of it was amazing. Hopefully Kavey got a shot, because I’d love you to see what a vibrant drink it was.

This is an event that I will not forget anytime soon. The elegance and beauty inside the restaurant – which used to be a ballroom - took my breath away, but there’s a quirkiness too. There is the Jungle Bar where we congregated http://www.laportedesindes.com/london/about-us/jungle-bar/ and I just loved it. I could quite happily have stayed there all day.

The tiger skin rugs of the old colonies are replaced by fake tiger rugs. Fake skins with a happy face and a flat fluffy tail. I may have wanted to take one home. Don’t worry, it is still there. Look, see? 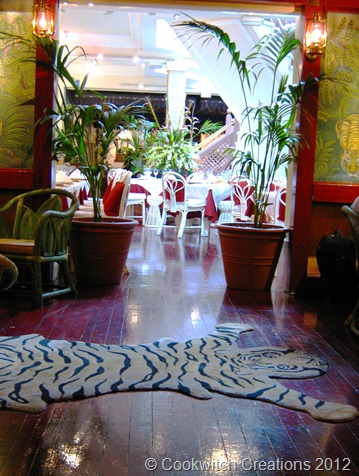 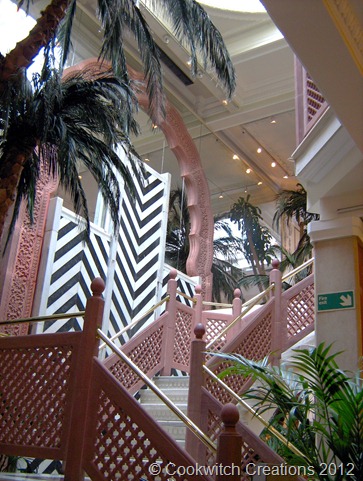 The general manager, Shirin, collected us all together and took us on a tour of the kitchen. I am well aware that a kitchen can be a territorial place. Anyone who has tried to cook with me will attest to that, and so I felt more than a little trepidation at going in. I shouldn’t really have worried, because everyone was smiley, and very accommodating to us invaders.

One of our group got to place a naan bread inside a blisteringly hot tandoor oven, and very brave of her it was too. We got to taste a naan, literally fresh from the oven wall, and it is so shockingly different to what you can buy elsewhere. Better, more crispy on the base and with a far superior flavour.

I managed to get one, very blurred shot of the oven, and it was blurred because the heat coming out of it made me not want to get too close! This is it. I show you my shameful effort simply so you can see the glow at the bottom. 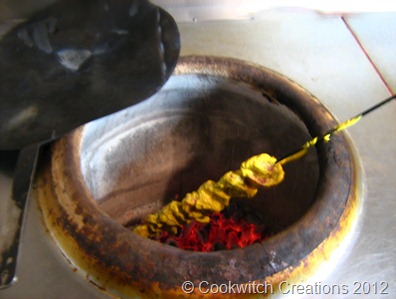 It is a compact space, with little room for manoeuvre, but everybody seems to work with it perfectly well. 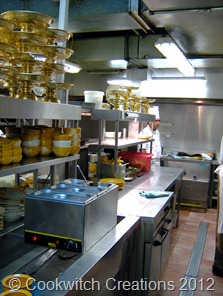 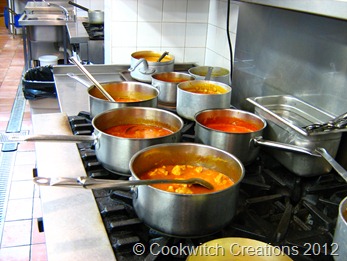 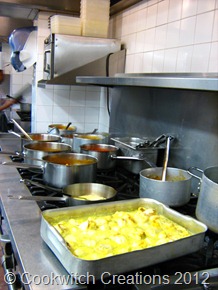 Now these big pots here are MY kind of cooking pot. Oh yes. What do you mean I overcater? 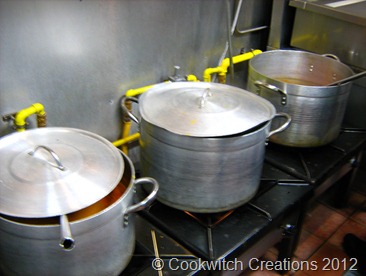 Next we invaded the personal space of a lovely smiling man making aubergine fritters, or beignets, which is what they are called on the menu. The smell of which drove a few of us mad it was so good.

Another blurred photo! (I was trying so hard not to get in the way that I rushed it, so that serves me right for worrying too much.) 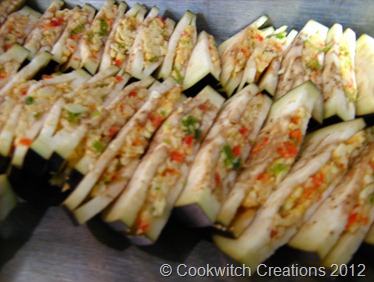 The aubergines are made into a pocket, stuffed with deliciousness, and then dipped in a gram (chick pea) flour batter and deep fried. Best savoury doughnut EVER as far as I am concerned. I’m going to get me some gram flour I think. The nice man also let me and another invader eat some of the crispy bits that had collected in the draining tray.

Next was the immense spice grinder, though I didn’t get a shot of that. I was too busy going “Oooh bowls in stacks!” and taking shots of those instead. 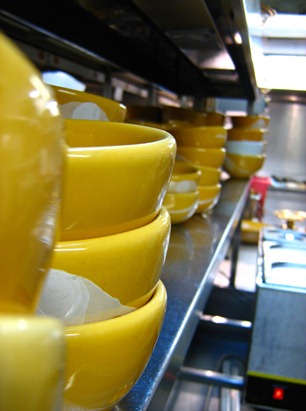 Time to depart the kitchen and head to the demonstration area. The majority of the following photos are by Ayub from http://www.aminart.co.uk/, and I am very grateful to him for allowing me to use them. Mine are marked with my watermark. 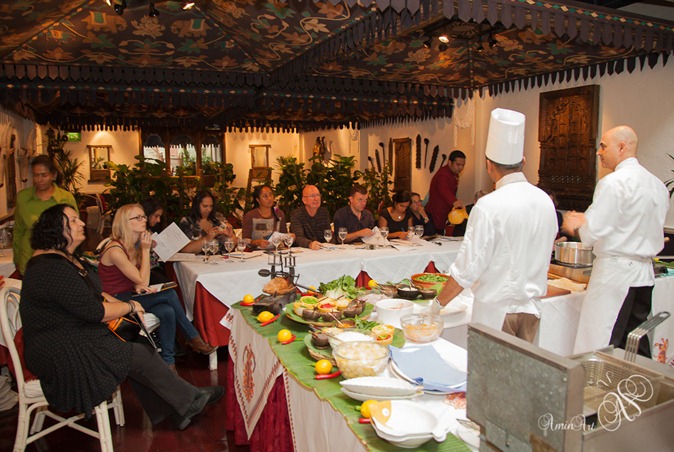 Yes, that is me at the front, utterly rapt in what Chef Mody was saying. 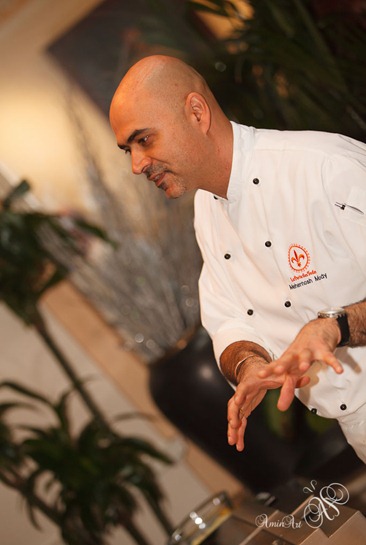 He described the cooking of each dish as they went along, sometimes being ambushed slightly by his incredibly quiet but efficient assistant. I named him Ninja.

Chef Mody is an absolute pleasure to listen to, a man with obvious passion for food, and the history behind both the restaurant and the cuisine. I also got the feeling that fools are not suffered gladly. 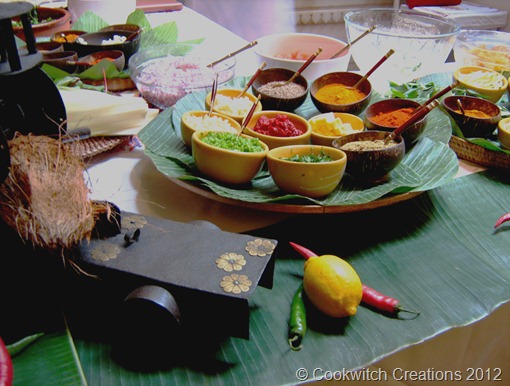 The wooden contraption in the fore of the picture is a coconut grinder, to scrape the coconut meat out of the shells, ready to make milk. Coconut milk is not the liquid inside, that is coconut water. The milk is made from squeezing the grated flesh once it has been mixed with water. 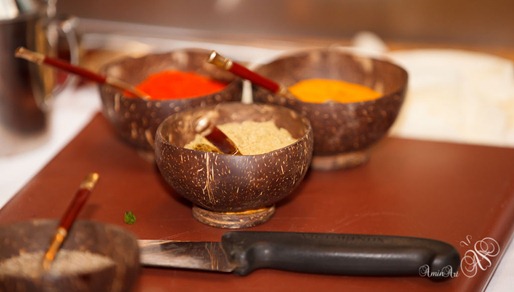 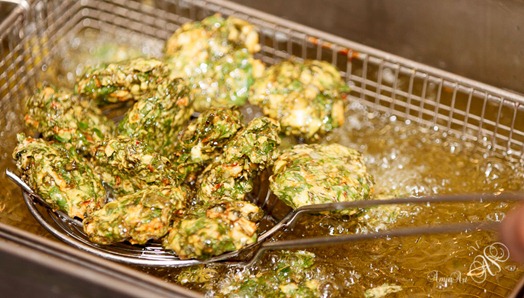 Chard and Water chestnut pakoras in the deep fryer. 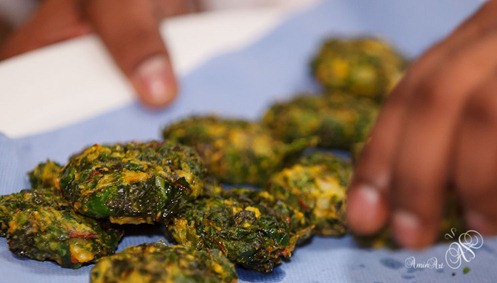 The finished pakoras – they were delicious! 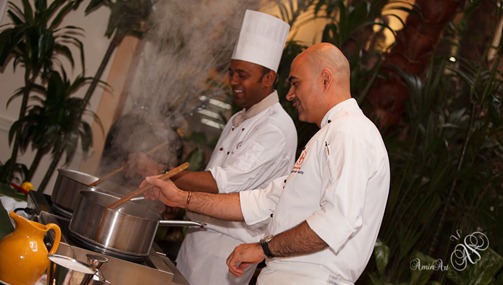 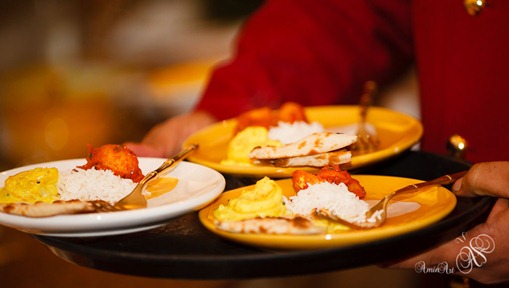 The prawn dish was my favourite, and quite possibly the best prawn dish that I have tasted in a long time. You could have given me a bowl of just that and that would have been me happy.

There was a wine expert present as well, and she expertly matched wines to dishes. I cannot comment there, as I don’t drink, but everyone seemed to be pretty happy with the choice of wines, and how they stood up to the flavours they were put with. There are also now a lot of wines being produced in India, and these are available at the restaurant.

After the demonstration ended, we had a quick Q&A session, and then…then it was on to lunch. I’m afraid the next photos are all mine, so may well be a bit shaky.

I was in a serious quandary as to what drink to order, and was nearly swayed by a Coconut Lassi, but when Kavey pointed out a Rose Lassi, that was that question answered. 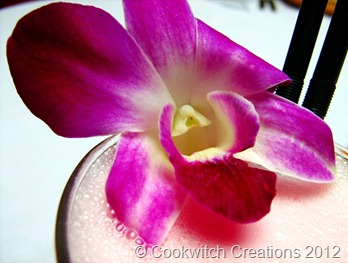 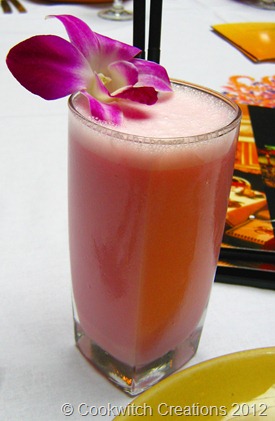 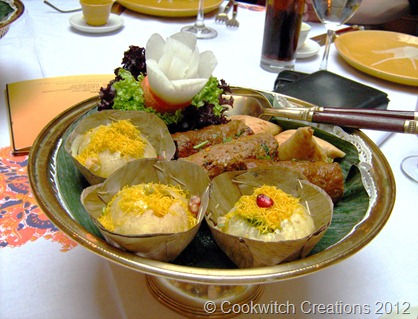 Our lovely starters consisted of beautifully silky Seekh kebab, deep fried puris (mini round breads that puff up when you fry them) filled with yoghurt and I think, a chutney, topped with crunchy sev. (deep fried gram flour vermicelli) It’s a variation on a very popular street food, pani puri, but thankfully this one didn’t leak all over when you bit into it. The samosas were perfection. Filled with minced chicken and spices, they were delicate, utterly moreish and light with it. This came with two fruity chutneys. 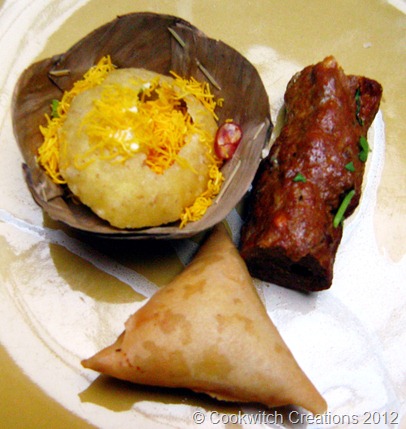 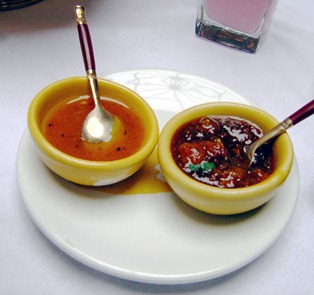 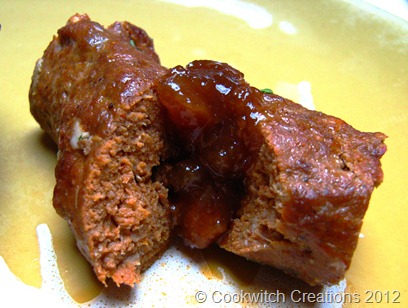 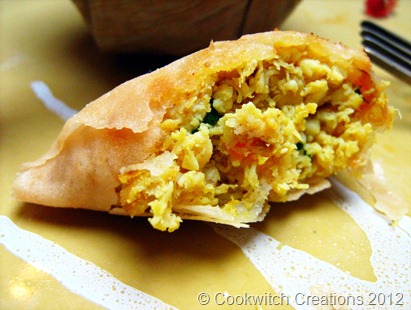 There was a danger of filling up here, but I stayed away from the basket of fresh naan. You have no idea how difficult that was. 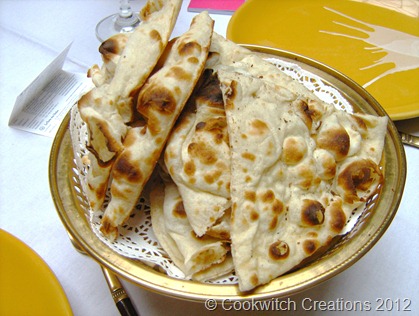 The mains were equally good. 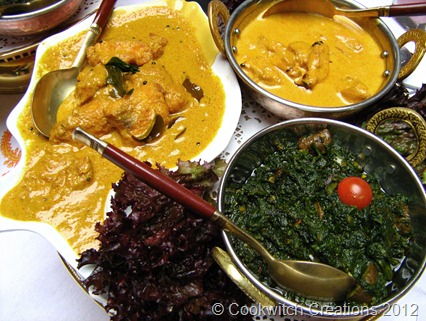 Poulet Rouge, which was chicken in a creamy sauce, then monkfish in a spicy sauce with dried red chillies and spinach sautéed with mushrooms. The monkfish was a bit too spicy for me, but that was probably because I’d chewed down on a piece of dried chilli, not realising what it was. That is what drinking a lassi is for! Not lager, people, yoghurt. Cools the mouth down nicely so that you can finish eating the delicious food in front of you. 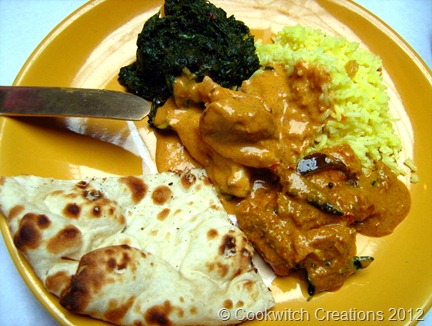 Just when I thought we were safe, desserts arrived. 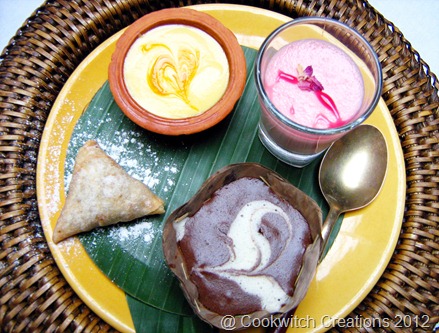 I’d gone for a wander to stretch my legs, so missed the explanation of what was what. The mini samosa was delicious, and contained chocolate and walnuts in a crisp shell. The chocolate mousse was served in a little leaf bowl and was rich and unctuous. Do you know how hard it is to scrape a leaf bowl with a spoon?

The pink dessert in a glass had the feel of a rice pudding, but possibly one made with ground rice. Tasty as anything though, and rose scented.

The terracotta pot was my favourite. It tasted like a mango cheesecake, so I suspect strained yoghurt with mango purée. It was divine.

Everything about our day was excellent. The only thing I would say was that the group was too large to be able to see properly or take everything in, mainly on the kitchen tour, but everything else proved to be brilliant.

My thanks to Chef Mody and Shirin, to Ayub for the photographs and to Kavey for inviting me along, plus the lovely staff who didn’t mind being invaded at all.

I liked it so much, I’m going to try and convince my boss to have our Christmas party there. I don’t think he will take much persuading mind, as it’s his favourite restaurant. I have been ordered to try the lamb chops when I go back.

I ate as a guest of La Porte des Indes and received a copy of their cookbook to take away with me.

Posted by Lisa Cookwitch at 7:19 pm