Today, then, had to include spaghetti. Luckily I had stocked up recently on some of my lovely Dreamfields low carb pasta, and in one of those boxes I knew there was angel hair spaghetti.

But what to make? I thought of the dish of sardines, and realised that even though I loathe sardines (I dislike almost all oily fish except raw salmon) I had a lonely looking tin of tuna to use up. It had to be done.

Lemon olive oil (this was a treat to myself that I bought at Maltby Street market a while back. Mallafre olive oil, crushed with lemons.)

The finely grated zest of one lemon

Handful of sultanas, soaked for about 10 minutes in warm water.

Gently fry the shallots in olive oil until they start to soften, then add in the garlic slices. Everything should cook through, but not brown too much.

Add in the sultanas, and the halved cherry tomatoes, cut side down. Cook gently until the juices start coming out of the tomatoes.

Add in the drained tuna and the lemon zest and up the heat a little.

When the pasta is cooked to your liking, tip it into the tuna sauce, and mix well.

I drizzled over some of the lemon oil to lift it, and it really worked. 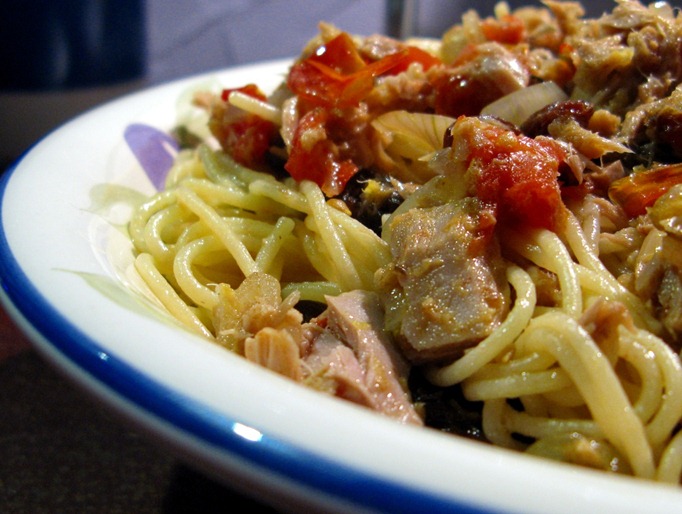 Posted by Lisa Cookwitch at 8:48 pm

So love that series and missed the last episode, I want to go to Sicila just toexperience the food.

Solange - I've wanted to go to Sicily for many years. I spent a lot of time in Southern Italy as a child, but we never managed to make it to Sicily!

I just love this series, I spend half my time looking for recipes the minute the gorgeous one is of the screen the other half eating! Fab blog

I adore that the show showcases food so much. And I love listening so them talk too. :)

If you do a search on this blog for caponata, you will see my take on it. Montalbano does love his caponata!