A KellyBronze turkey is more than a breed - it is a philosophy...
"bred, fed, reared and prepared under optimum ethical conditions" (Observer Food Monthly) to give you the ultimate eating experience.
Our family has been producing our unique and delicious tasting KellyBronze turkeys for more than 25 years.
We are truly passionate about what we do - and believe it shows in the flavour and texture of the turkey you put on the table.

Thanks, yet again, to my lovely friend Kavey, I received an invitation to visit Kelly Bronze Turkeys in Danbury.

Reading about the company made my decision for me – as if a day with Kavey wasn’t enough incentive!

“Paul and his father Derek have spent over 25 years developing the best bronze turkey for the Christmas dinner table. In the early 1970’s they put their efforts into buying up all the last remaining breeding stocks from all around the country to rear turkeys for Christmas concentrating on flavour and texture. But this is not the only thing that helps to make a KellyBronze turkey so special, each turkey is produced the Kelly way. This means each bird is dry plucked and hung for up to 3 weeks and does not go through water at any stage of the processing, unlike standard supermarket turkeys.”

Being somewhat light on the job front at the moment, I had some spare time, and was in dire need of cheering up. Tying on my big boots, I readied myself for the day (we had been warned it would be muddy) and made my way to Chelmsford station. Kavey and I arrived early, so shared a nice coffee whilst wondering where to meet everyone else.

We first found Ed – representing  Helen from  Fuss Free Flavours - (I’ve snaffled his photo of Paul, and his lovely write up is here http://fussfreeflavours.com/2012/11/down-on-the-kellybronze-farm/) and then Solange from Pebble Soup.

Paul Kelly – the present MD of Kelly’s – came to meet us. (Though minus the turkey. That would just have been awkward.) 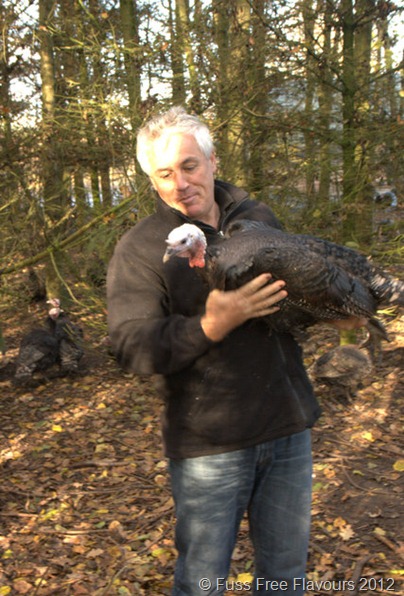 He drove us through Chelmsford then out into the country to Turkey HQ.

Can you tell that this is Turkey HQ yet? 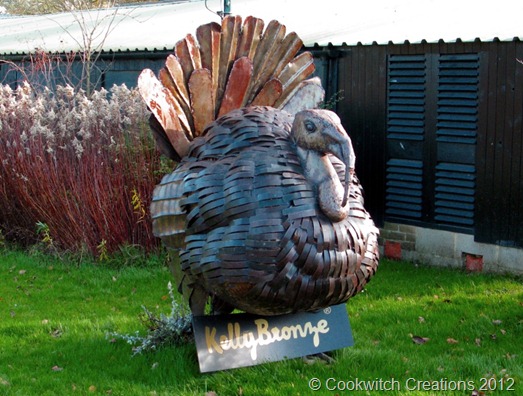 We were taken into a nice, warm office, and given coffee and biscuits. Paul then endeavoured to give us a talk and a presentation, though I’m afraid that with a roomful of chatterboxes, it kept veering off into conversations about food and cooking, and discussions about all kinds of things. Paul is a very genial fellow, and didn’t seem to mind at all, joining in merrily with us.

The talk was incredibly informative. Finding out that the traditional white turkeys are in fact just a mutation of the bronze, but people prefer the white because of appearance. The feather shafts in a white turkey are still there, you just can’t see them in the skin  like you can with a bronze. I suggested that they added truffle flavouring and call them truffle spores. I see a market for it darling!

Now. There are bronze turkeys, and there is a KellyBronze® turkey. It’s not just the breed, it’s the way of rearing, the good feeding, the spacious and natural environment, the way the animal is killed and then treated after death. It’s an entire process.

The birds are left to grow slowly, so that they mature at a natural rate, putting on the weight and fat content with no artificial assistance for six months. This is around  three months longer than an intensively reared, standard white turkey. It’s not just kinder, it results in a huge whack of flavour.

Once the birds have met their end, also as humanely and as stress free as possible, they are dry plucked and then hung, at low temperature, for 14 days.

Kelly’s uses a process called New York Dressing which, oddly, is no longer used in America, even though it originated there. Paul had just come back from the USA, teaching them that method again.

(Oxford English Dictionary)
New York dressed: (of poultry) sold by weight without having the entrails, head, or feet removed.

The process ensures that exposure to salmonella bacteria is almost eradicated,  because after being hung, not only do the enzymes have a proper chance to do their tenderising work on the meat, the entrails come out all of a piece, lowering the chance of contamination.

The dry plucking leaves the top layer of skin intact, and they also use a waxing process to get rid of the majority of the feather shafts. (I admit, when it was announced that the turkeys were waxed, there was rather a lot of hilarity round the table.)

The other thing that appealed to me – being a dark meat lover – is that they also remove the tendons from the legs. Anyone who has ever tried to eat a turkey drumstick will know what a boon this is. I adore the leg and thigh meat, so when faced with a turkey drumstick complete with tendons, I do have a bit of a battle. (Incidentally, the Duchy Originals bronze turkeys for Waitrose are produced by Kelly’s, and have undergone the same procedure.)

Now a bit about the company because, dammit, it’s important:

I love that they have revived an old tradition, and kept it going.

It’s a very pretty looking place, and I’m afraid on the way out after the presentation, I made everyone stop so that I could take a photo of this beautiful water feature. 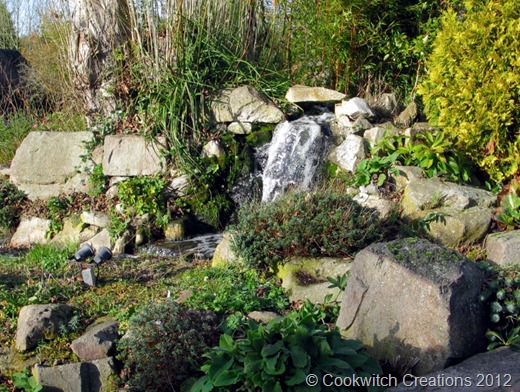 We piled back into the truck, and headed off down more country lanes to where the wild things were. 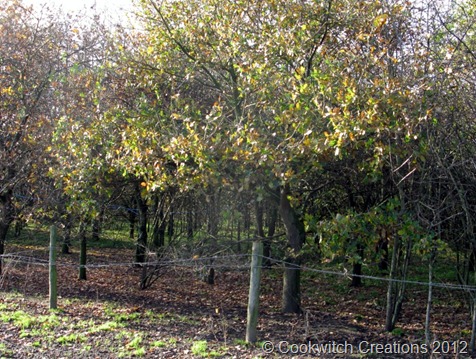 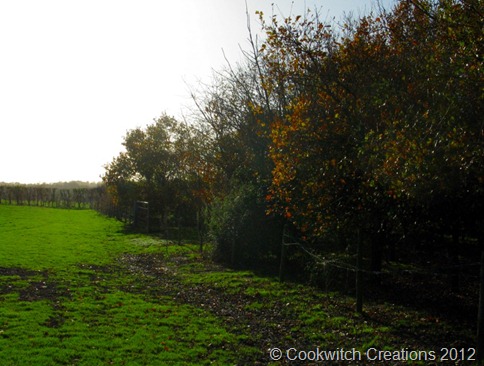 And yes, it was muddy. This was the drier bit! 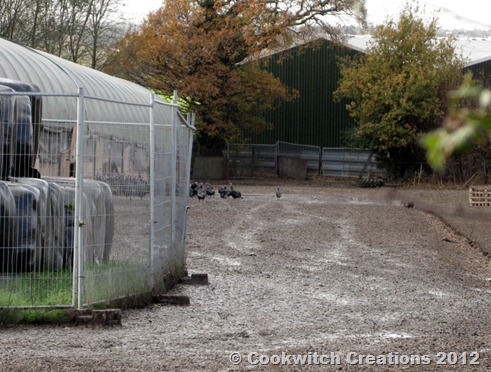 Turkeys don’t like the wind, so the majority of them were sheltering in the barn. Very sensible. 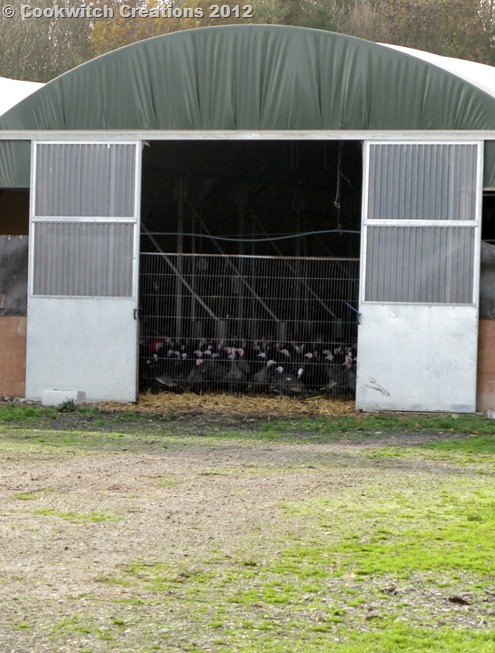 I admit to not venturing into the wooded parts, as my balance is shot at the moment, so walking on slippery mud would have been a disaster. Instead I wandered back across the field, carefully, only to turn and realise that I had become some sort of Pied Piper to the turkeys. 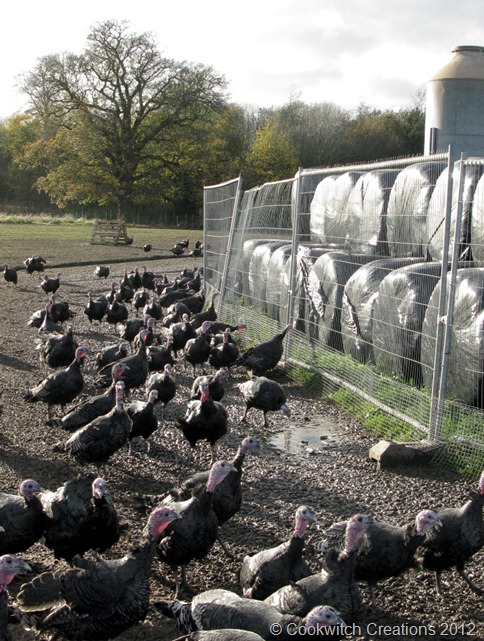 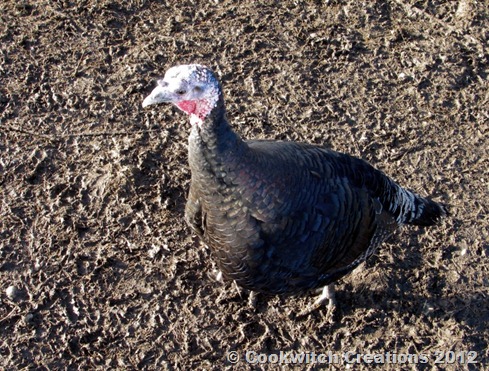 They really are inquisitive, and seem quite happy to follow anyone, so I had no problem imagining the turkey walks from East Anglia down to the London markets in time for Christmas.

After being buffeted about by the wind for a while, we were quite glad to head off to Paul’s house, where he very graciously fed us lunch. There followed an intense moment of pure kitchen envy here. 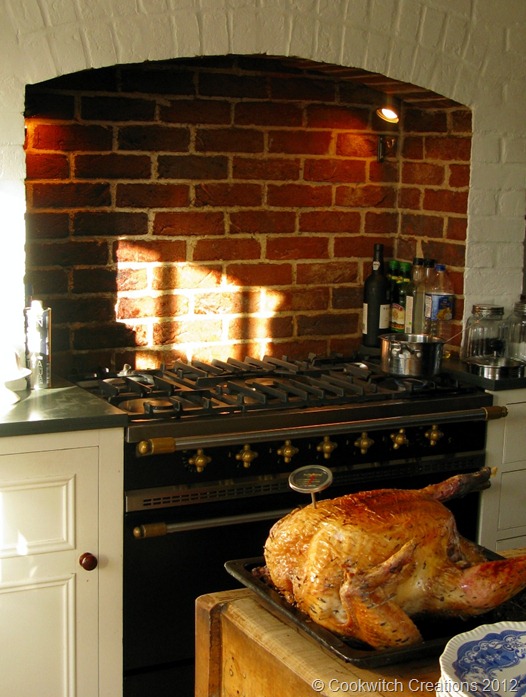 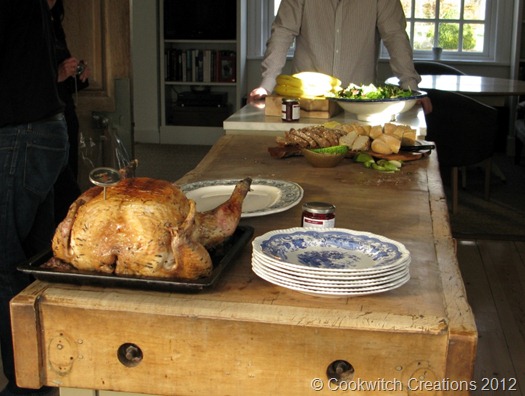 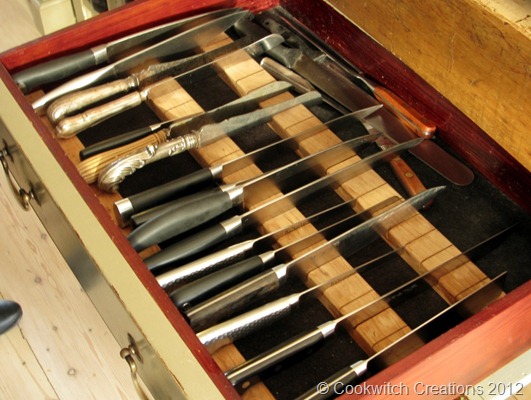 The smell of roast turkey filled the house, neatly aided and abetted by the juices simmering on the stove. 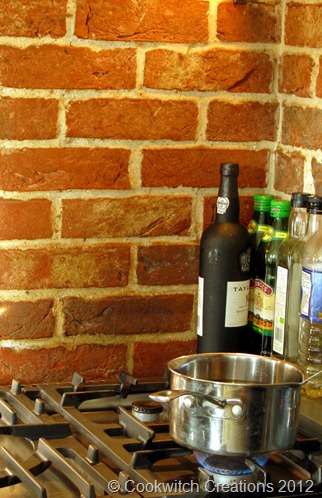 The bird, in all its golden-skinned glory, was waiting to be expertly carved by Paul. He’s won a world record for turkey carving you know.

Look at the skin on that. Delicious! 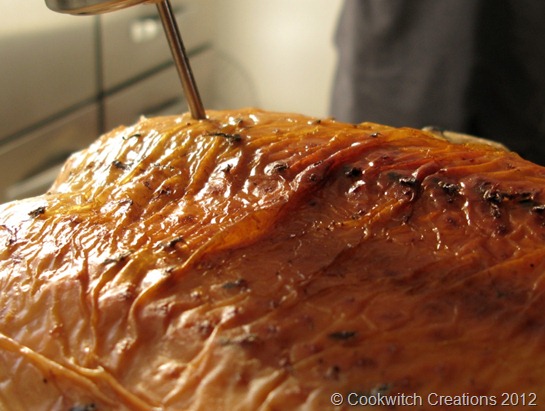 As the breast was taken off, I asked Paul to hold it up, purely so I could get a shot of the juices coming out of it. You can see them there on his hand, and on the knife. This turkey was NOT a dry turkey. To be honest, no turkey should be dry.

Generally it is not the fault of the turkey, it’s the cooking. The cooking times on many commercial birds are wrong. They are set to deliberately overcook, to reduce the chance of anyone getting ill. Health and safety is good, but in this case, that also ruins what is a delicious meat. 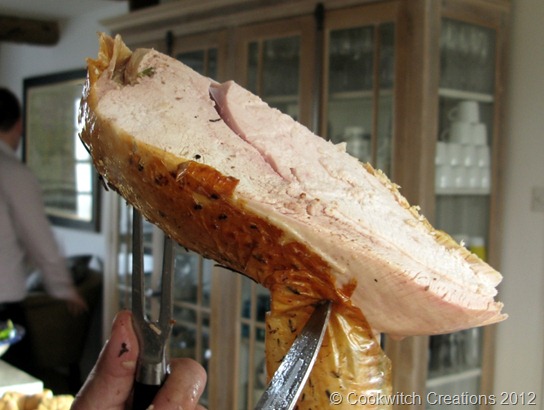 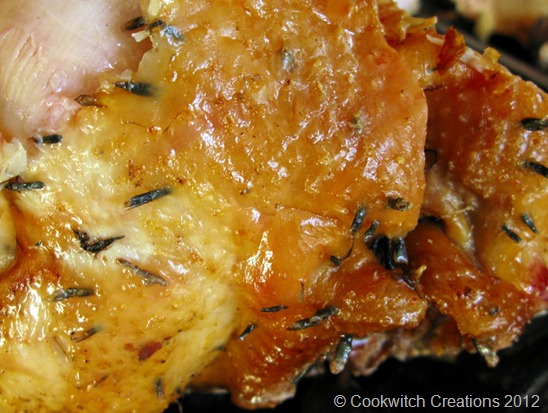 Kelly’s send out a meat thermometer, free, with every delivery, and they also send cooking instructions. 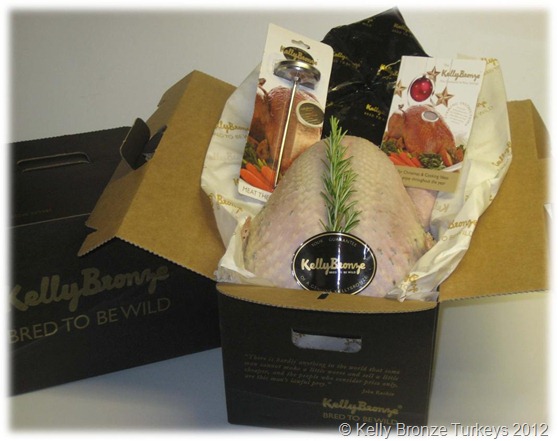 The meat that we ate was so very moist, that I fully appreciated the huge amount of work that goes into it. It’s an expensive way of rearing, and yes, the turkey is pricey compared to the average supermarket bird, but it really is worth it. There’s no gravy added to that meat, it’s just the juices from the bird itself. 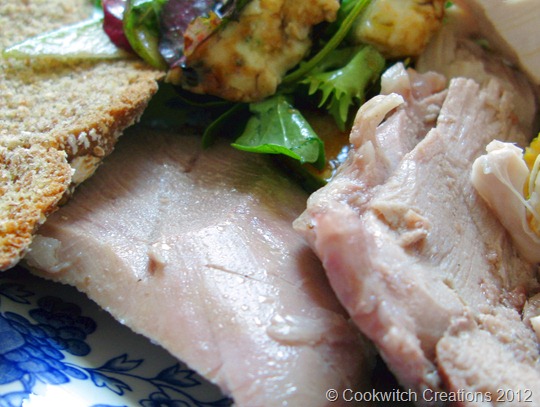 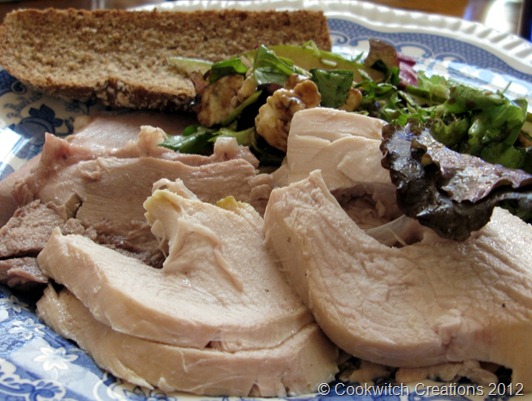 As an extra treat, Paul took the skin off the turkey, salted it, and roasted it on its own for an extra while. TURKEY SKIN CRACKLING people. It was delicate and highly savoury, quite addictive! We kept passing the plate round and round until it was all gone. I’m absolutely doing that with mine next time. I am going to fight the urge to make bacon dust to sprinkle over it.

I can honestly say that, even though I liked turkey before, I actively LOVED this one. The meat has a far nicer texture, and the flavour is more pronounced. It was incredibly tender, and utterly delicious. Yes, I know, that word gets over-used but really, it was.

I am quite willing to save up to have one every year. A proper, once a year treat.

It’s not just us foodies who were impressed. Anyone recognise this young fella? 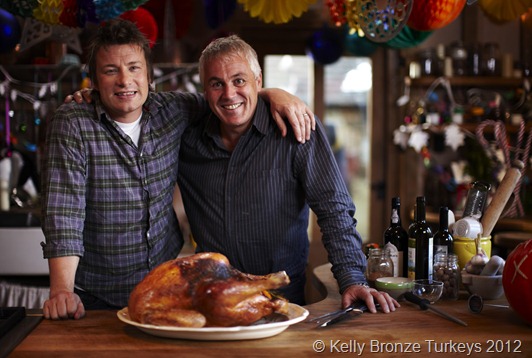 Jamie is also a fan and promoter of the Kelly way of carving. That’s the carving that Paul won an award for. In case you didn’t see that earlier.

They also do a half turkey, for the smaller family, and all kinds of other things. I want to try the turkey sausages, because they sounded fabulous.

You can order and then collect from the farm, which would be a grand thing to do as they try to make it really Christmassy, with mulled wine and a grotto. I love the special touches they add, it’s a mark of a company that truly cares about what it does. If you can’t make it to Essex, you can order online and have it delivered right to you.

Here’s to many, many more years of Kelly Turkeys. An enduring legacy for Molly, Paul’s Mum, missed but never forgotten. She advocated cooking the turkey breast side down first, which maximises the flow of fat into the breast, keeping it even more moist. I will be doing that, too!

We had a fabulous day, and it was such a treat to witness people with real passion for what they do.

Special thanks go to Paul Kelly, for welcoming us with open arms, into your business and your home.

I went as a guest of Kelly Bronze.

Posted by Lisa Cookwitch at 8:26 pm

Lovely to see the success of a firm producing good meat in an ethical way.

I got kitchen envy as well just from your photos!