Please note: the photos on this post are not by me, (except the Tzatziki) they were provided very kindly by Total Greek and their fabulous photographer, Rick of http://www.satureyes.com/.

There are things you don’t often get to see on a weeknight. One of those things is chef Eric Lanlard scrubbing down tables, and lugging them outside to a van still dressed in his chef whites, and the other is two utterly beautiful Cypriot women, Greek dancing in a venue decorated with olive trees in enormous yoghurt pots.

I got to see both of those, and feel quite privileged, I can tell you.

Tuesday 13th saw Icetank in Grape Street turned first into a French patisserie, and second into a Greek kitchen, for the occasion of Total’s 30th birthday. 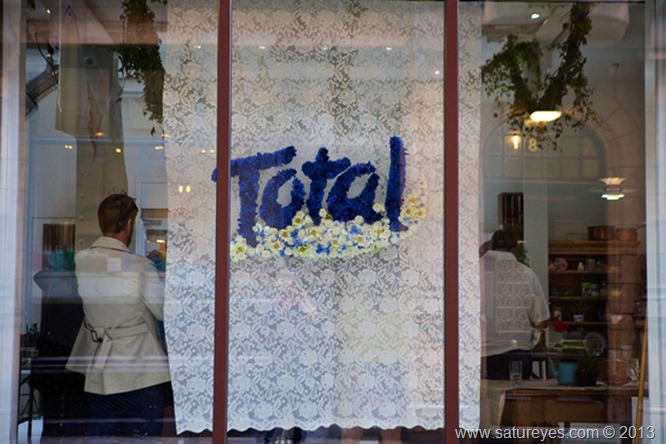 I had to miss the first session with Eric, as I was needed at work, but come 6.30pm, I was there, got a drink and settled in to wait as the Total Greek team bustled about like mad, moving things, serving people drinks, making sure everybody was looked after and generally being fabulous. It was a bit late starting, but as me and others all said “How very Greek.” Everyone was happily milling about and catching up with people they knew, so all was fine. Champagne is also a great social mixer.

By all accounts, the cake making session had been a great success, and everyone was very happy with what they produced, as well they should be! 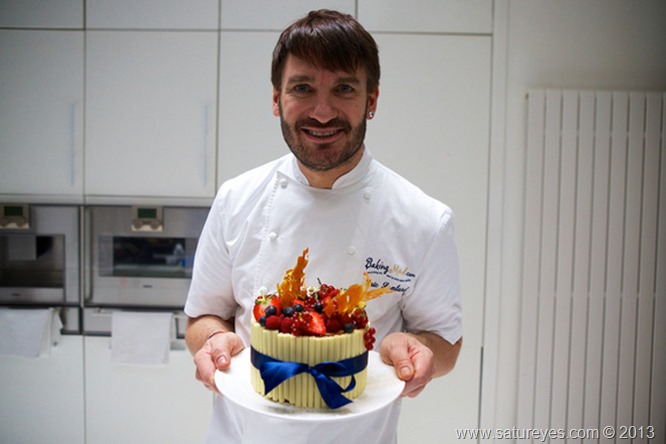 I was happy to see Solange, from Pebble Soup, as it meant I then knew someone, plus I hadn’t seen her since we visited Kelly Bronze Turkeys. We mingled a bit, and watched the event start to take shape. We also admired – and possibly coveted - the beautiful cake that was the centrepiece on the table. My goodness. 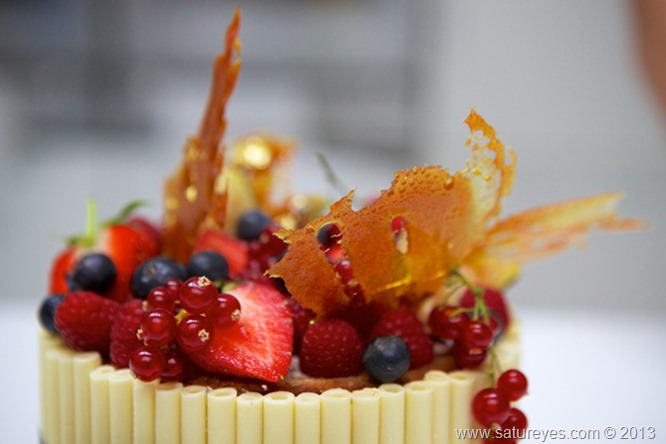 Next I spotted Dee Thresher and that there Dr Hilary Jones off the telly. We had originally met at another Total Greek event, a breakfast in January of 2012 at The Goring hotel by Victoria station, and I found them both to be utterly delightful, down to earth people. Dee is another Cypriot. I think we just find each other. Look how cute they are! 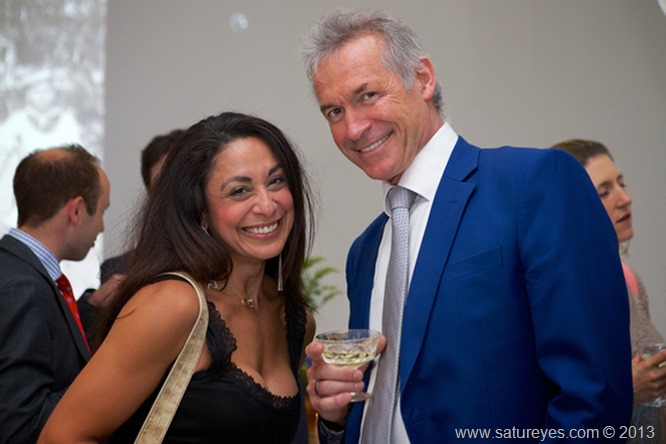 Now. Back to the event in hand. I had come to see another of my cooking idols, Tonia Buxton. I’m sorry Eric, you’re lovely, but Tonia…well, you know how it is. 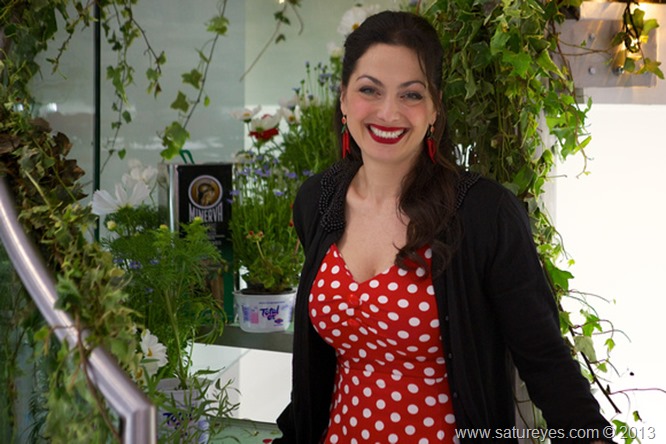 I first saw Tonia on television, quite a few years ago now, when she presented some cookery items on Market Kitchen. The utter fools didn’t have her back very often, but oh they should have. She is a force of nature. I remember finding her website, and emailing her way back then in 2009:

Thank you for being an inspiration. You bring those Cypriot recipes to life - and prove that Greek cooking is not all kebabs.

You have shown me foods from my childhood, and it is wonderful.

Good luck with whatever you do in the future - I am sure it will be a success. Always good to see a beautiful Cypriot lady on the television!

And she answered. Well that did it. I was sold.

Tonia also did Beauty and the Feast, in which she made healthy food tasty and interesting. Which is as it should be. Sorry Rosemary Conley, but...just...NO. White sauces made from cornflour and water? No, no, no.

A former Miss Universe competitor (I think, but I am sure she will correct me, because I may be misremembering!) and, as her site says “Presenter, Historian, Writer, Gourmet Cook and Beauty Expert which she balances with being a wife and mum to four children!” 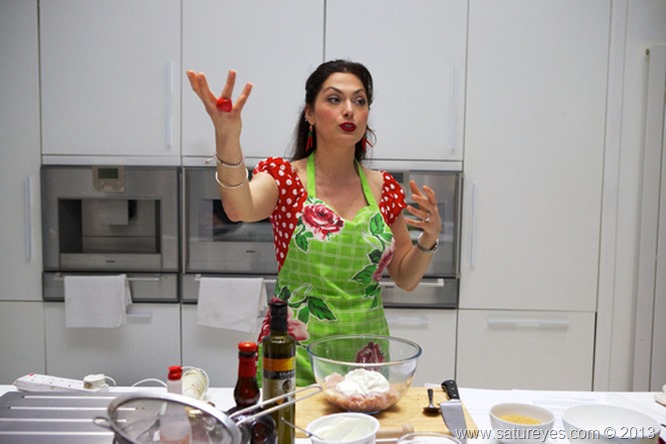 She’s also an all round good avgo. Look that one up in your Greek dictionary.

I love her programmes, because they make me feel at home. To hear the familiar words, see dishes cooked on television that I had last seen made in my own house, and in various family members’ houses, is very comforting.

My father was born in Cyprus, way back in the mists of time, so I grew up with his Cypriot accent, not mainland Greek. There is a difference. Even now, if I hear a Cypriot man speak, it makes me smile. You can tell that accent a mile off. I love it.

We do have different names for things, and our cooking is different too.

One of our island specialities is the Easter pastry, flaounes. Tonia features that in her show My Cypriot Kitchen, and I have adapted the traditional recipe to make my (quicker and easier on the back) Halloumi Pie. Fresh mint, dried mint, sultanas, halloumi, spices. Fabulous stuff, quite Middle Eastern in flavour. When I’ve mentioned flaounes to mainland Greeks in the past, they’ve never heard of them.

But, as ever, I’m rambling. I could go on about food for some time, and often do. I probably bore people with it, to be honest. Oops.

We all gathered around to watch the brand new Total Greek advert, which is incredibly well put-together. I admit I found it amusing because it’s just the sort of thing my dad would have done as a boy. He was always scandalising someone.

Once we’d watched that, and I had stopped coveting all the fabulous little Greek touches that adorned the space, 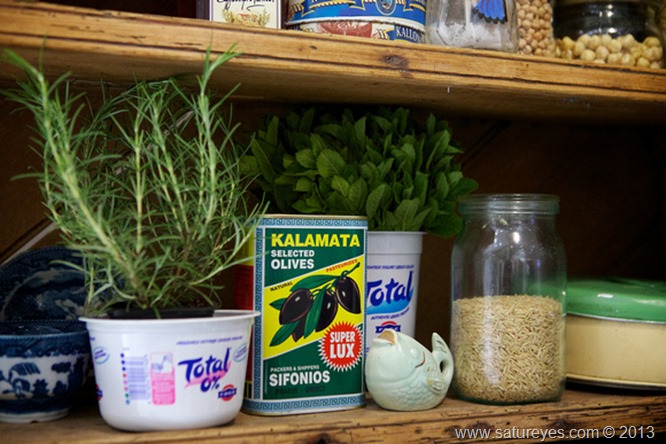 Tonia started off her demonstration by making some savoury fig and feta tarts. 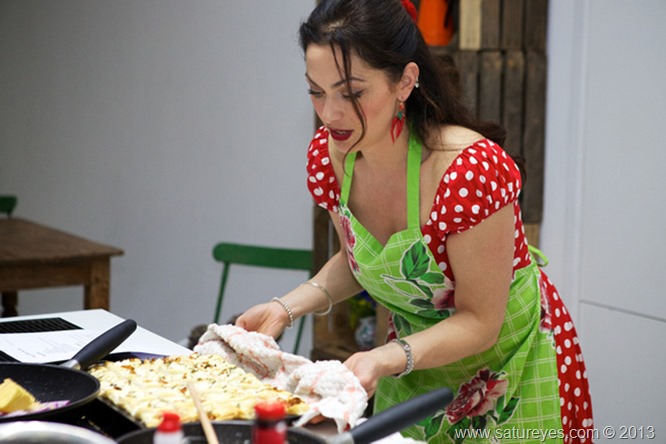 Press puff pastry into mini muffin tins, and load with spiced figs and onions, top with yoghurt, feta and thyme, and bake. They are truly a revelation, and incredibly easy to over-indulge on as well. Eric Lanlard says we can use bought puff, if it’s made with real butter, so that’s what I’ll do. They are a delicious treat, and the salty cheese works incredibly well with the honey-sweet figs. Warning; the fig filling gets incredibly hot, and stays hotter longer than you think, so be careful of the old tongue there. 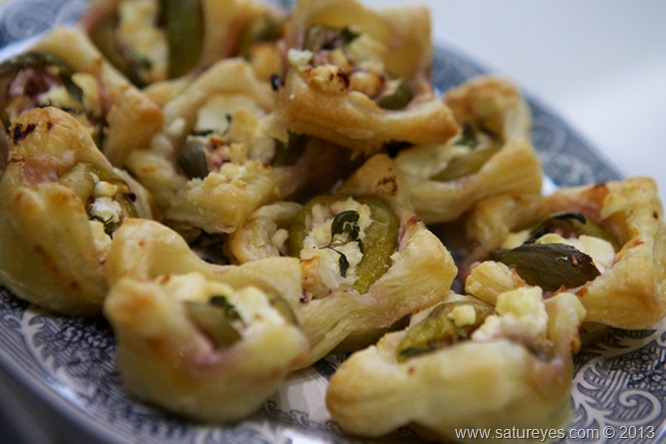 When they brought the trays round after the demo, Dr Hilary and I became rather taken by these, and discovered that it’s very difficult to chat when you have a mouthful of searingly hot fig and crumbly pastry, but oh my…they were SO good. Dee stuck to champagne.

Onto the next recipe – and here arose something that does seem to be a problem at foodie events. Talking.

We had in front of us a person who had travelled to do a demonstration specifically for us. I can’t comment on how Eric’s session went, as I wasn’t there, but I do consider it quite rude if the person doing the demo has to shout – and in this case actually sing a bit of opera – to make their voice heard above the babble. I know we’ve all got things to talk about to fellow bloggers we haven’t seen for a while, but at least have the decency to shush until the demonstration part is over.

You can talk all you want then. Comments, quick exchanges, yes, even quiet conversations about your own stuff are fine, but if they are loud enough to drown out the chef, then they are not fair on those who might be novices to cooking, or those who really want to listen. It’s also not fair on the chef/cook who has to shout to be heard. It just seems more than a bit disrespectful.

The next dish was chicken with pomegranate molasses on mini skewers, served on a bed of yoghurt. I couldn’t hear what else was in there, but I will find it in the book, because my goodness it was delicious. Tangy and yet mellow at the same time. Lovely, and very moreish. 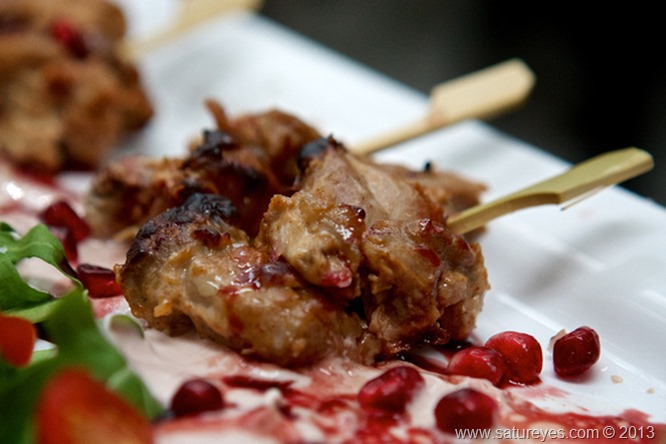 Next up was Rose Petal and Yoghurt Ice-cream. Oh my god. It was a cloud of Turkish Delight-flavoured smoothness. So easy on the palate, and very easy on the eye. It came served up in mini ice-cream cones, which just made it both adorable, and effortlessly easy to over-indulge in. The room filled up with the sound of crunching as everyone reached the cones. 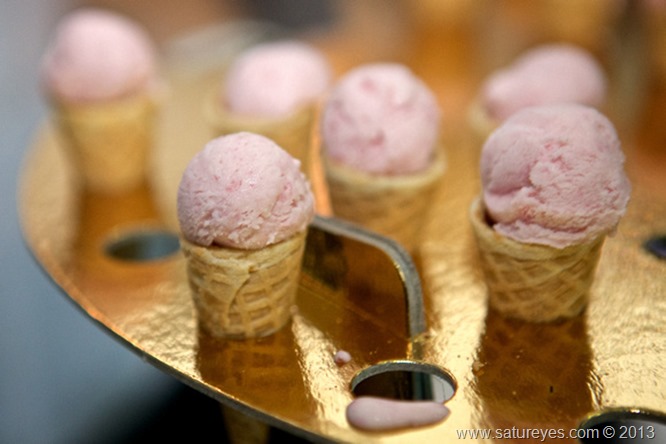 Once the socialising proper started, the music was provided by a rather lovely duo. 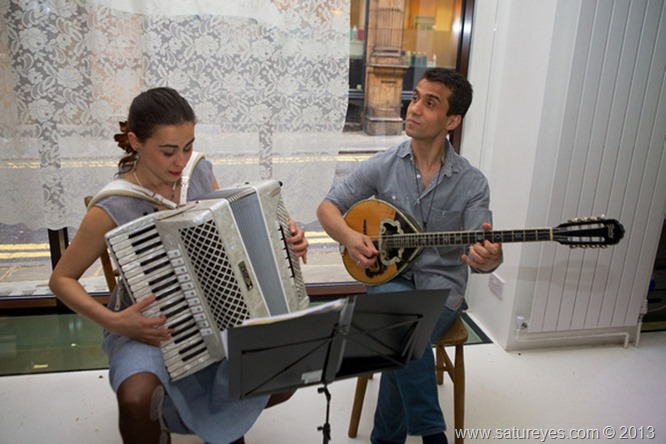 This led to Dee and Tonia doing some Greek dancing, which was something to fill me with delight. I mean, look at the two of them! 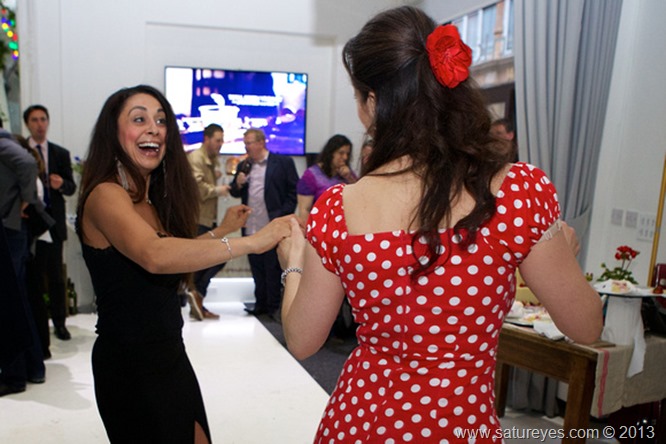 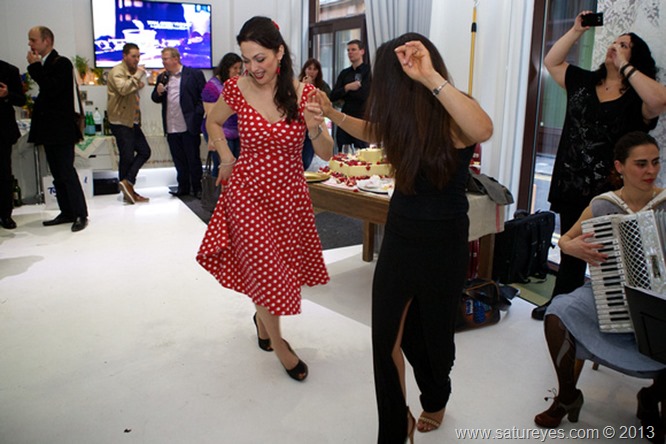 I could have stayed all night swapping “Do you remember when…” style stories, but I had to leave after that, as I had a train to catch, but it really was a fabulous evening, and I enjoyed myself tremendously. Not to mention that I got a goodie bag of pots of yoghurt, mint, garlic and cucumber. I used that to make Tzatziki, and we loved it. (Husband is actually finishing it off now with tortilla chips, literally as I type.) 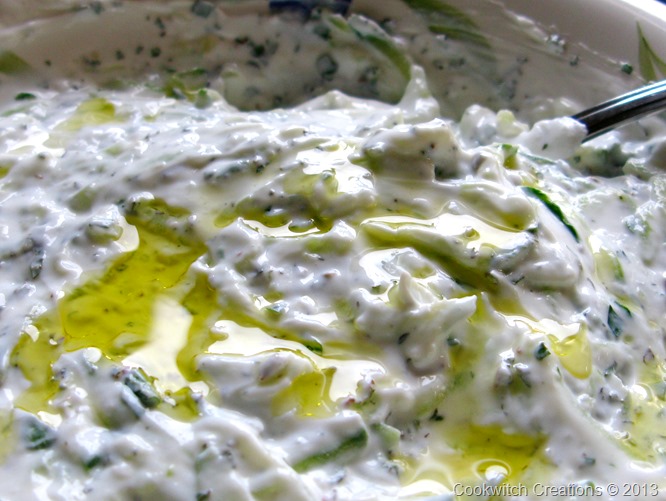 Thank you to all at Total, Eric, Tonia and all the others who made it just a brilliant evening. 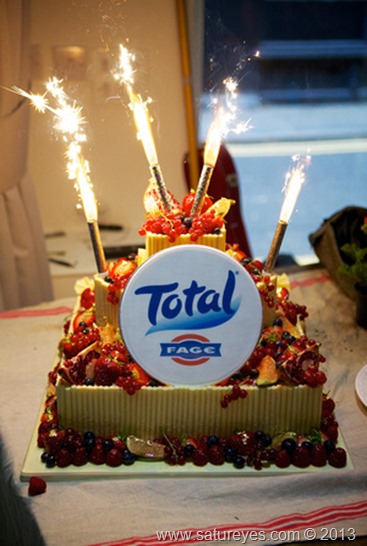 Posted by Lisa Cookwitch at 9:53 pm

Thanks for writing up the vening in a way that made me feel a little bit like I was there. I was so guttted not to be able to go - two amazing masterclasses and the Total greek team who are just so lovely. Grr. Ah well! Now at least I have a "taster" of it. Also, I LOVE Tonia's outfit.

So sorry not to be able to see you, but I am glad my writing made you feel at least a little bit part of it.

Yes, that dress is amazing. It's from The Pretty Dress Company.