It’s Thane Prince’s Cookbook Club this week, and the theme is Paris. I’ve only ever been to Paris once, and even then it was only the outskirts, and only for an overnight stay, so I didn’t get to explore the food shops. We were on our way to Chalon-sur-Saône, and had a long drive ahead of us, so we just didn’t have time.

If we had had the time, I’d have been sure to hunt down some Madeleines. I love these little sponge cakes and, truth be told, I am death to a bag of the Bon Maman ones.

I wanted to make some to take to Cookbook Club, so set about baking.

The plain vanilla ones were first and then, inspired mainly by London Bakes post here, some Fig and Orange ones.

Nice and easy recipe here, which I used just with lemon zest. They are nice, but need more vanilla I think.

The next lot up were the fig ones. I wanted to use up a jar of Fig Molasses that I’d bought from the Turkish Deli in Borough Market. I used it for making a green bean, fig and almond salad from my friend Sabrina Ghayour’s Persiana, and I had quite a lot left.

I added grated orange rind too, because fig and orange goes very well together, and then used wholewheat flour, to make them slightly more toothsome. For once, I didn’t add cinnamon, the fig molasses needed to shine through a bit.

The smell as they were baking felt like Christmas had invaded my house again. Trudged its way through the snow, and climbed in through the window.

I can highly recommend these! (I’ve put them in a box now, so I don’t eat them all.)

Beat the sugar/molasses together with the eggs until it’s well mixed and slightly creamy. This takes around 3-5 minutes. (It does separate a bit, just whisk it back in.)

Whisk in the flour, bicarb, extracts and then whisk in the melted butter.

Leave to stand for an hour.

I sprayed my moulds with baking spray, but you can butter and flour them if you prefer. I had one metal tin, and one silicone, so I could alternate them for faster baking.

Fill each little mould 2/3 full. I used a teaspoon, as my mix was quite thick. You can pipe it if you want, but I couldn’t be bothered, if I’m honest!

I baked each set for 10 minutes, and made sure I set a timer. They came free of the moulds very nicely indeed. I think next time I will add a bit more sugar, and use half white half wholemeal flour. 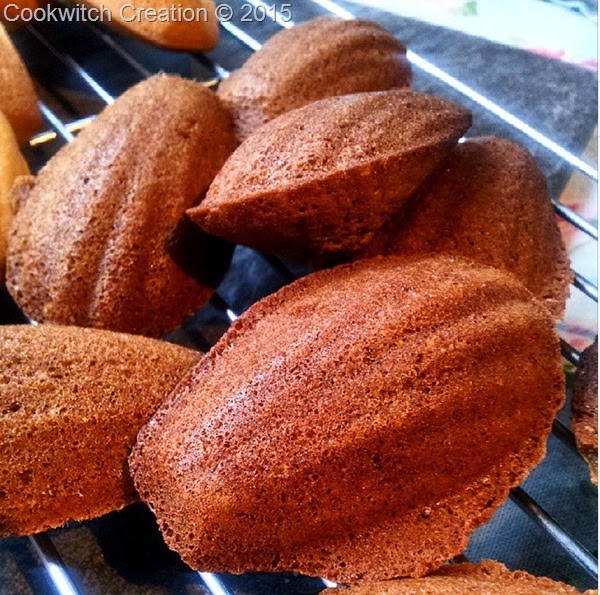 Posted by Lisa Cookwitch at 7:33 pm