I heard about Chop Bloc via Gary on Twitter. I’m not sure how a new steak place opening up not that far from us managed to pass me by, but it had. We’ve eaten at Miller & Carter in Chelmsford quite a few times, and have always found them to be of excellent quality, and good value, so we decided to check out Chop Bloc to see what they were like too. And, you know, because Steak.

Their location is a little tricksy, as they are in the town centre, so the SatNav got confused, then so did we. (I called them. Park in the carpark by Mothercare, head over the bridge, and they are just beyond Giraffe)

They’re in a corner with a few other chain restaurants, but they are built into an 18th Century grain house, so they look sufficiently different.

It has a dark feel, lots of exposed brick and wood floors, but it feels comfortable. I do love a good bit of brick. 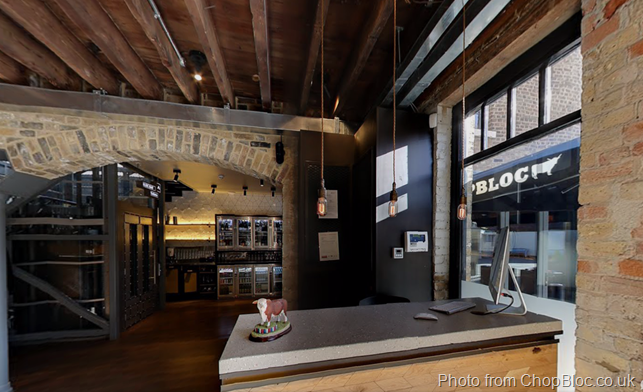 We were shown straight to our table (they have a staircase, but they also have a lift. Yay Accessibility!) We sat for a bit, breathing in the smoky scent from the Josper charcoal grills/ovens.There’s a lovely roasting beef scent to the place, as you would expect. And they really know their beef.

“Sourced from an supplier of Hereford cattle, they take the unusual (for the UK) move of dry aging the meat onsite. There’s storage for over three tons of beef in the building, which gives the chef great flexibility to portion the meat when it’s at its finest.”

THREE TONS. Sounds like a beautiful thing to me.

Now, when steak is sold by the gram, I get confused, and preoccupied with working out how much it is in ounces, and then thinking “Would I really pay that much for a steak?!” quite a lot. It takes a while to get over that. 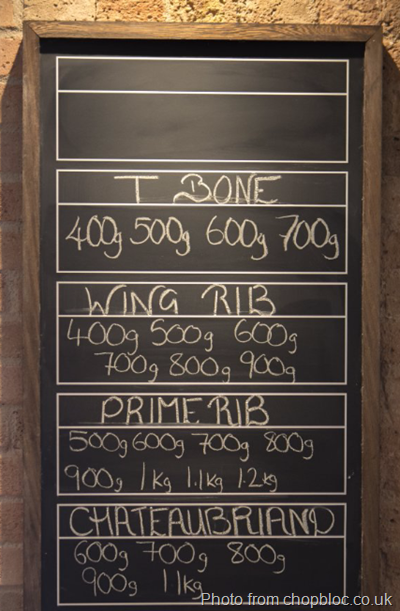 It would be very, very easy to spend well over a ton here, without really noticing, in the first five minutes.

However. We eventually settled on the ribeye, as that’s our benchmark steak. Medium well for Tex, medium rare for me.

I love that each steak has a stick in it so you know which is which. 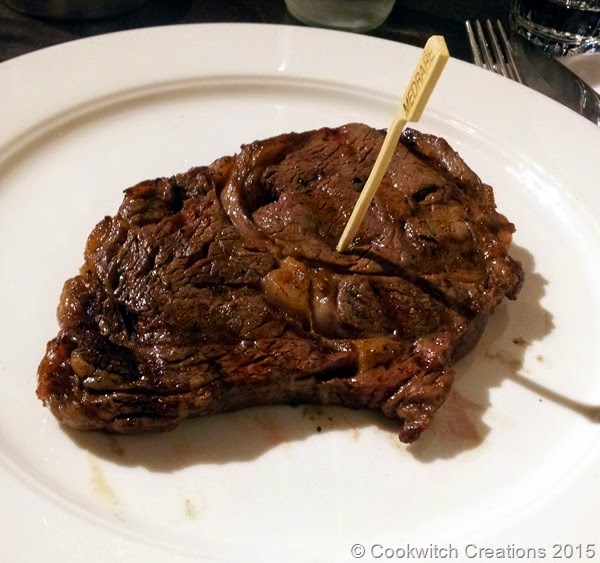 I am not sure a starter would be wise, even though they all sounded very tempting, especially the Panko Pork Belly.

Tex got chipotle fries with his steak, and a side salad. I had poutine, because I’ve never had it, and plain corn. 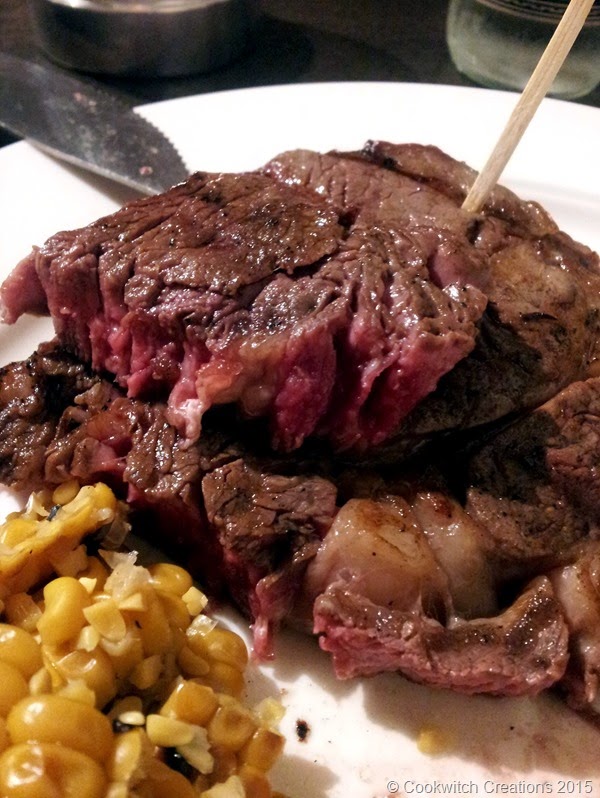 I was very, very happy with my steak. Very.

The corn was very nice. A smoked taste to it, which can get a bit samey if everything has it, but then I love smoke, so I didn't mind at all. The small pieces of spring onion give it a nice tang.

WARNING KLAXON: The Poutine is huge. It really is a dish to share. Honestly. We did point out that perhaps a warning should be put next to it on the menu. 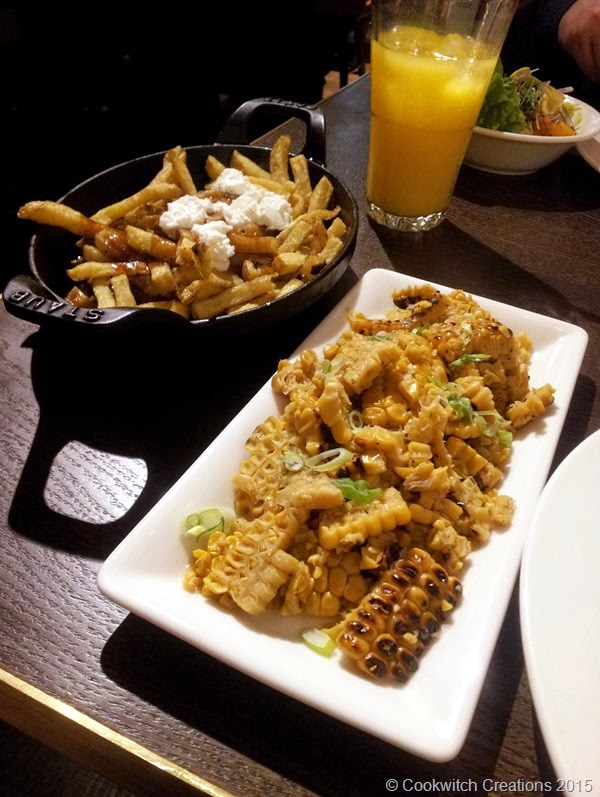 That’s fries, with cheese curds, drenched in an amazing gravy. It’s rich, very dark, and made from all the bones, including veal bones. 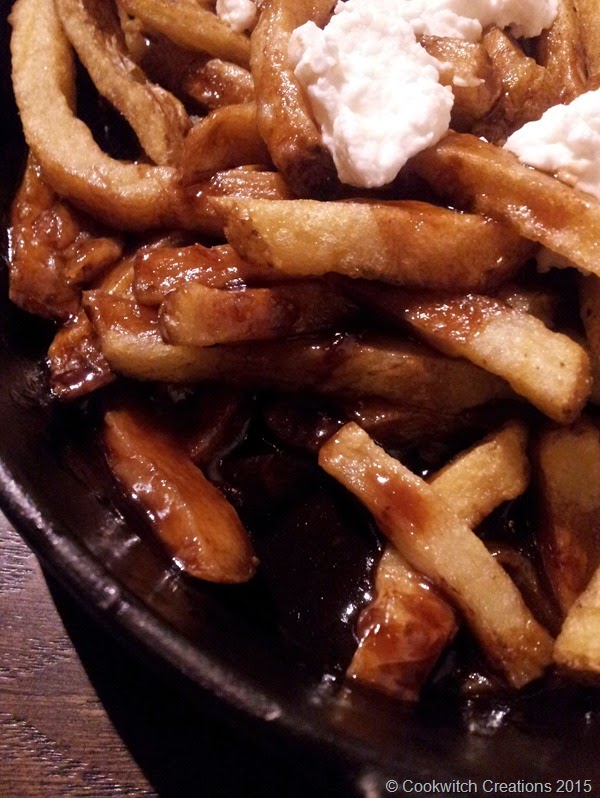 That’s not simply the bottom of the pot in there, that’s beef jus. If they sold just a cup of that with some bread, I’d buy it. One of their sides is mash and gravy. I am so having that next time.

I do think that a side of a simple salad would be useful. Lettuce, tomato, cucumber. Just that. Tex’s salad had lots of things in it, half of which he picked out. (Green pepper shouldn’t be thing.) Miller & Carter do an Iceberg wedge, with a choice of dressings, and that’s perfect. Good and crunchy to cut through the richness of the steak.

Have another corn photo. Yes, I liked it that much. It didn’t need butter, it was tasty enough on its own. 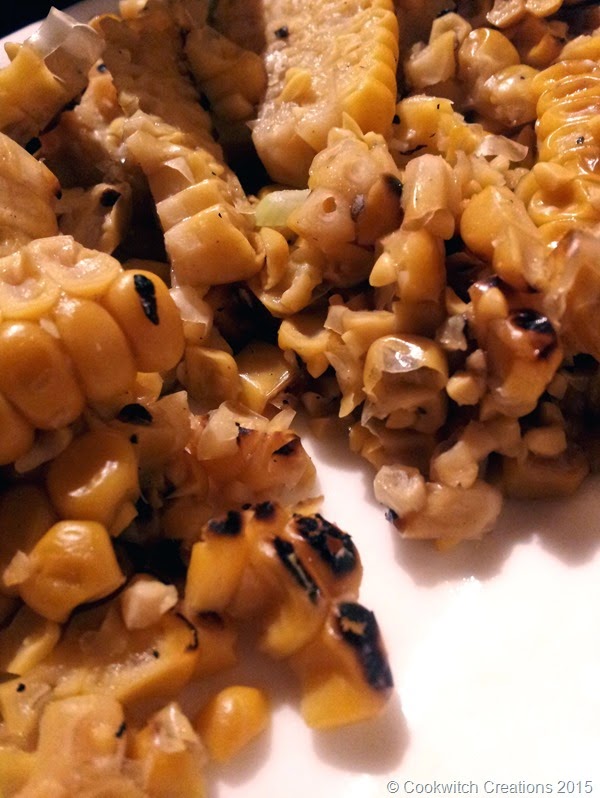 The only drawback was the noise level. The room that we were in seemed to be exceptionally echoey, not helped by a table of shouty men by us. The lack of anything, acoustic-wise, to absorb the sound, was extremely noticeable and, to be honest, it hurt my ears. Everything seemed to be amplified. It needs some nice carpet! (I know it doesn’t go with the look. But it does. Or at the very least some acoustic dampers like wall hangings.) 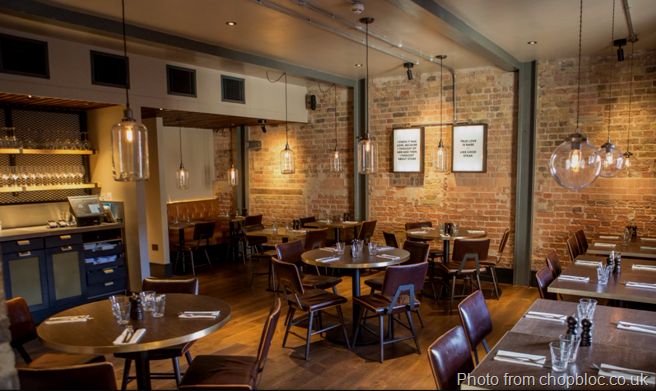 All in all, it was a very nice dinner. I think, for me, it would be a destination more for a special occasion, as yes, it is a bit expensive, but this is very, very good meat, and worth paying for.

Hey, glad you liked it! It really is a top quality restaurant and I wish nothing but the best for them. I must go back there soon.