I was asked if I wanted to take part in the Jet2Holidays Country Cuisine Challenge, and when I saw that Larnaca was one of the regions on the list that we could choose from, I jumped at the chance.
My father was born in Larnaca and even though, sadly, I’ve never been to visit, just passed through the airport, I still find I have a small link to it though the stories that Dad used to tell me from when he was a young boy there. My mum now lives on the Turkish side, so I don’t come via Larnaca any more. The food is very similar though because, let’s face it, we’re all from roughly the same part of the world, and we all eat bread and houmous, just via different recipes.

Cyprus is beautiful, and is said to be the birthplace of the Goddess of Love, Aphrodite. I would very much recommend a visit, and once you've been, you will find yourself wanting to go back again and again. Jet2Holiday's Larnaca page is here, so go and have a good rummage and  choose where you want to go! http://www.jet2holidays.com/cyprus/larnaca-area

We’ve been invaded by just about everyone, and kept a lot of the culinary influences. We might not have wanted you as our overlords, but we’ll take your spices thank you very much!
Cumin is one of those spices. Mix it with cinnamon and you have a heady, rich blend that, to me, just says Cyprus. They are the spices in Hirino Spithkasimo (Homestyle Pork) which is a great favourite of mine. Good and hearty, and another one of those dishes that just gets better over time. It was a bit too warm today to have the oven on for any length of time, so I thought I’d use the same spices, but on lamb chops. You know how Greek people love their lamb, right?

Given the lovely weather, chargrilled meat and salads just seemed the right thing to do so I went to my local Turkish shop, who stocks lots of things from Cyprus, to see what I could find. I never really plan ahead, I just go and see what looks good.

There was gorgeous broadleaf spinach, sweeter and less iron heavy in flavour than the small leafed variety. Potatoes still red with the earth they were grown in, small cucumbers, more crisp than the English ones. Greek yoghurt too, and lovely Cypriot anari cheese, made in Larnaca. 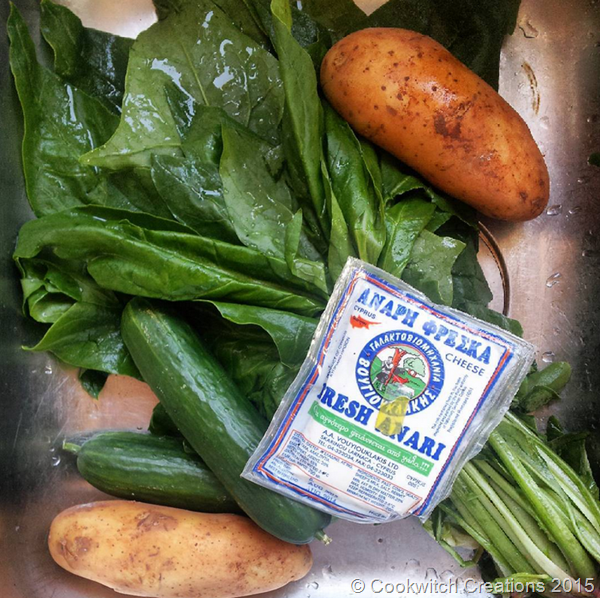 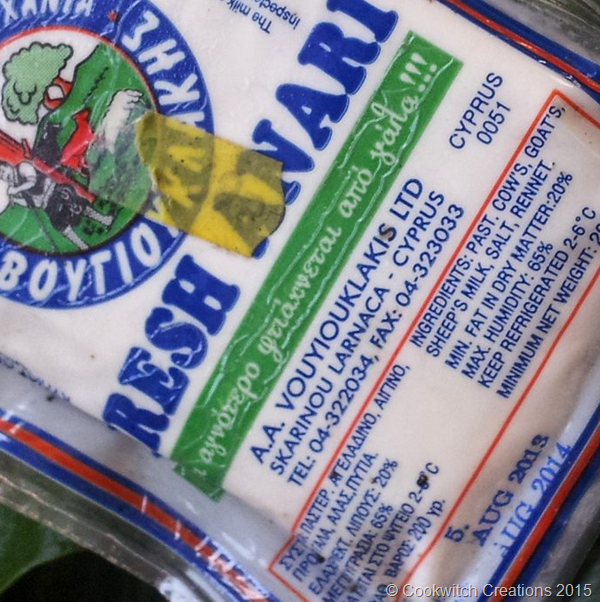 There is something about those potatoes. Not just their flavour, which is creamy and rich, but the fact that they are covered in the earth of Cyprus. They are usually sold with a heavier covering of earth, and that keeps them fresh. It makes me smile to have that dirt on my hands.

So. Lamb was my choice of meat, and anyone who has been to Greece over Easter will be well aware of how the smell of lamb cooking over the coals permeates the country. Lamb cooked on the barbecue it had to be. Coals, not gas.

The butcher had gorgeous chump chops in stock, so four of them found their way into my shopping basket.

Put the chops into a bowl, douse with olive oil and lemon juice, then sprinkle in the herbs and spices.

Make sure every surface of the meat is covered with the spice mix. Don’t be scared to add more if there are gaps in the coverage.

Leave them to marinate in the fridge for a couple of hours, or overnight if you can.

Take them out of the fridge half an hour before you want to start cooking.

I lit the  bag of charcoal, and after about 20-30 minutes it had a fine covering of white ash.

Got the chops from their marinade, placed them in the middle of the grill of the barbecue and cooked them for around 10 minutes on each side, then moved them to the edges to cook a little more but at a lower heat. (I put the flatbreads on once I’d moved the lamb.)

They ended up sizzling, juicy and slightly pink inside. 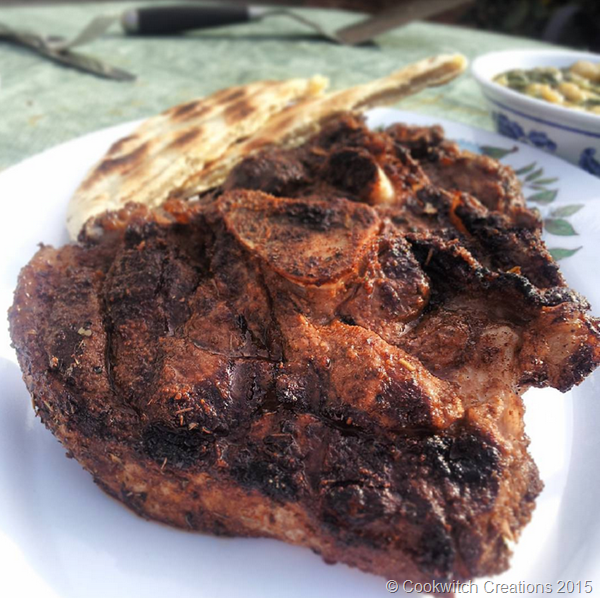 Cyprus is covered in lemon trees. Everybody seems to have one, and there is so much fruit everywhere. I imagine that people must get fed up with them, there are so many.

Every gathering I went to as a child seemed to have potato salad on the table. Usually dressed with a lot of lemon and olive oil, and with chopped parsley. I wanted something like that, but lighter, so I added a few more vegetables for crunch. 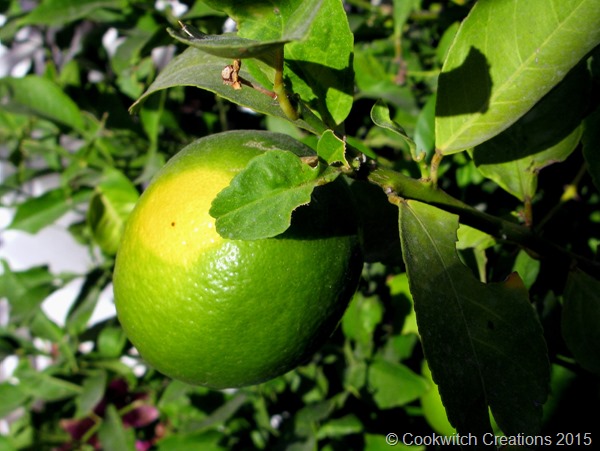 I had a lot of garlic and lemon oil left over from cooking garlic courgettes on Friday night, so used that, but any good full flavoured olive oil will be fine.

Put the warm potatoes in a bowl, pour over the olive oil and lemon.

Add a shake of salt, the rest of the vegetables, then mix well.

Keep this one at room temperature. 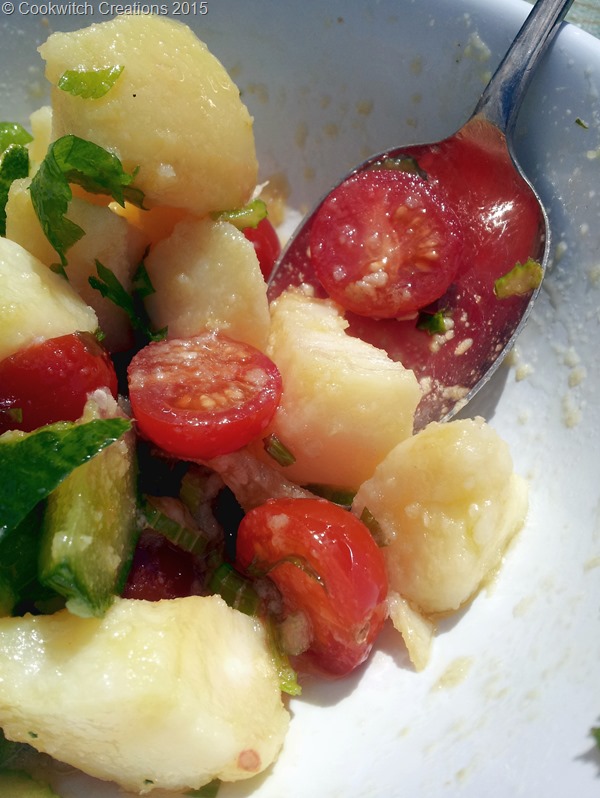 I had to do something with that lovely spinach. I knew that I had half a jar of roasted aubergines to use, so a spinach aubergine salad came to mind. 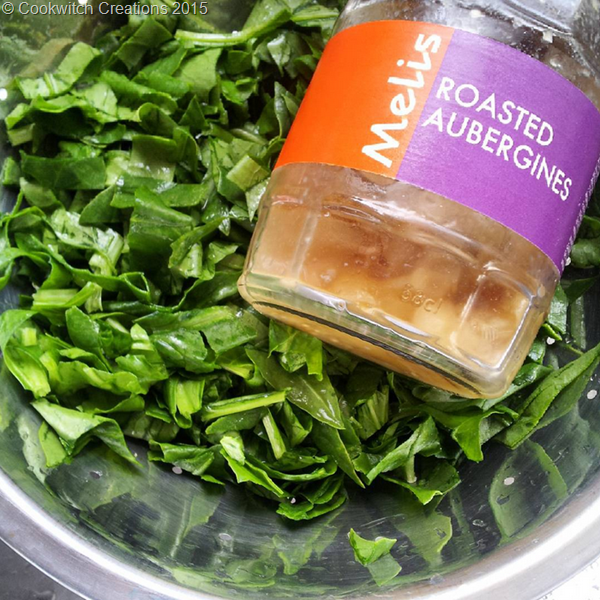 These jars are well worth looking out for. Most Turkish shops will stock them. The aubergines are roasted, smoked and peeled, and chopped. I had a beautiful soup made from them when I was in Cyprus, and still have the recipe that the café owner gave me, written in a scrap of paper, tucked into my spice box.

This is not a pretty salad by any stretch of the imagination, but it is a very tasty one.

1/2 a jar of roasted aubergines

Heat the olive oil in a wide pan, and gently cook the garlic until translucent.

While that’s cooking, chop the spinach finely and give it a second rinse. They do seem to hold sand.

Put the chopped spinach into the oil, and cook it down. Lots of water will come out, so tip most of it out, then add in the aubergine and keep cooking.

More moisture will happen, but keep cooking and eventually it will evaporate.

A little liquid is fine, as that keeps it light.

Taste it and season to taste with salt and lemon. This is very nice when it’s warm, as the smoke seems to come through more. 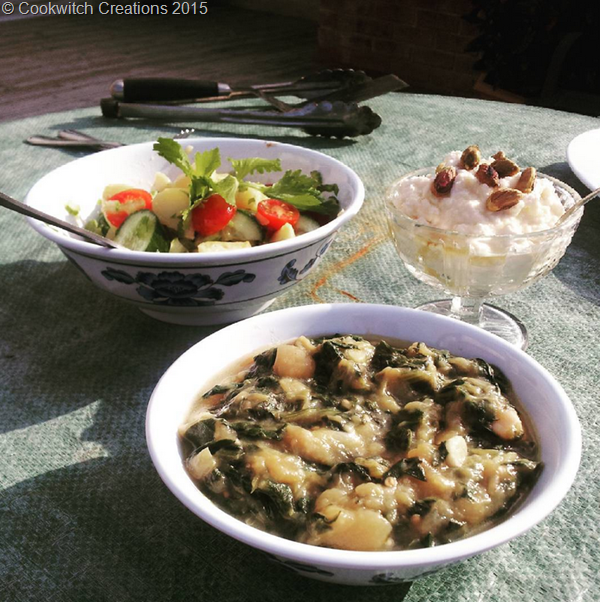 A Cypriot meal wouldn’t be a meal without bread. I didn’t have time to make a whole knead, rise, knead, rise loaf so flat bread was an option, plus I wanted something that I could cook on the barbecue. I HATE wasting the heat left in a barbecue once the main cooking’s been done.

I did a search for ‘quick flatbread’ and found a Jamie Oliver recipe for Navajo Flat Breads. Easily adaptable, so some of my immense supply of Cyprus mint went into them.

I certainly didn’t want 10 of them, as there was only me, so I halved the recipe.

Mix the flour, salt, baking powder and herbs or spices in a large bowl. I use a dinner knife for that bit.

Make a bit of a dip in the centre, then pour in the olive oil and the warm water. (I found that I needed more than the 75ml)

Use the knife to gradually bring in the flour from the edge of the bowl, and add another splash of water if you think it's too dry.

Once it starts to combine, wet your hands and use them to really bring it all together until you have a cohesive ball of dough.

Dust your hands and a clean work surface with flour and knead the dough with your hands until it is smooth and elastic. This will take about 5 to 10 minutes. (I oiled my hands, that helped a lot.)

Pop the dough back into the bowl, dust it with a bit more flour, then cover and leave to relax.

After about 10 minutes, divide your dough into 5 equal-sized balls, then lightly oil your hands and press each ball between your palms to flatten them slightly.

Dust with a little flour as you go, and pat and slap the dough from the palm of one hand to the top of the other. Turn and twist the dough about in a circular movement as you go and keep slapping from hand to hand – each flatbread should be about 1cm thick. (I admit that I didn’t do this. I just flattened them and then rolled them out.)

Then I popped them onto the barbecue until they were cooked through. They puff up a little bit. 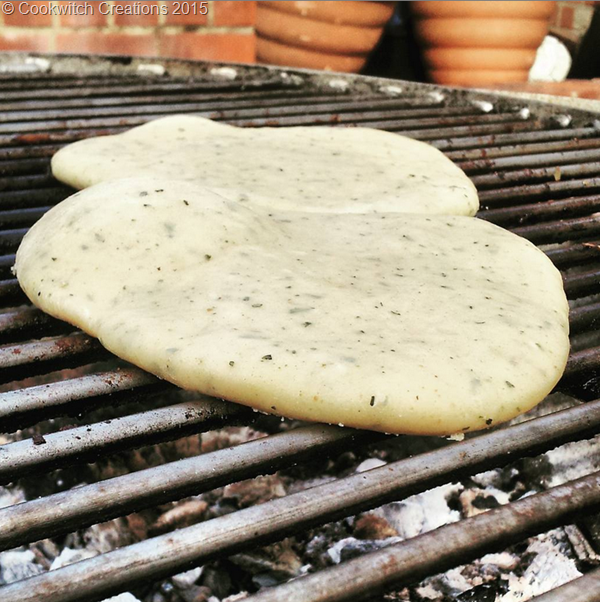 I’d made the dessert earlier in the day, to give the flavours a chance to get to know each other.

2 tsp rose water (add 1 first and see how you like the taste. If you don’t like rose water, use orange flower water.)

Mash the anari, and mix in the yoghurt. It won’t go completely smooth but it will even out.

Add in the rosewater and the honey. Taste it, and see if you need a bit more honey.

Leave it to sit in the fridge until you’re ready to serve.

Pile into a dish, and top with toasted pistachio nuts and a bit more honey. 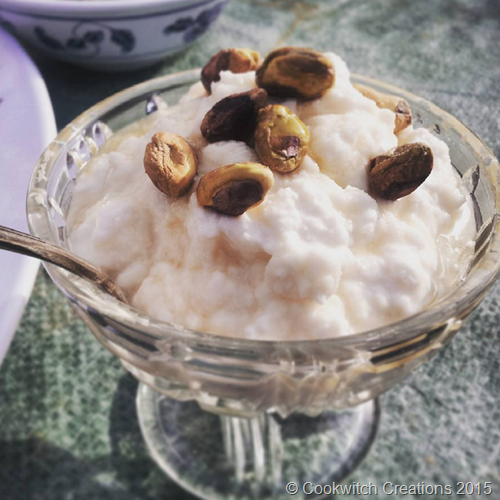 All in all, it was a very successful dinner. I felt that I had done my Dad proud, and managed to get the flavours that he would have recognised into my cooking. 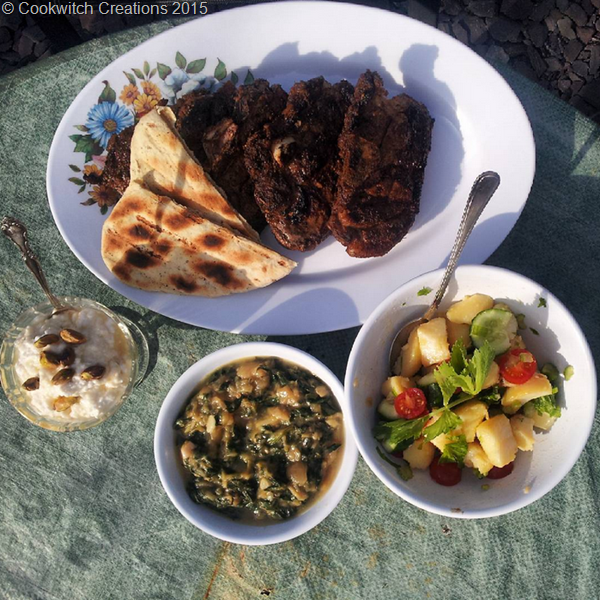 The flying ants descended just as I finished dishing up, so I decamped inside. I appear to have a very well behaved cat, as she totally ignored the food, and went back to sleep again. This lot also did me for a breakfast, a lunch, and a dinner! Anari dessert with tinned peaches is rather lovely for breakfast.

Thank you to Jet2Holidays for providing the budget for my shopping.
Posted by Lisa Cookwitch at 6:21 pm


That looks so lovely and now I'm starving. There are no Turkish markets anywhere that I know of although there may be some in LA or New York.
I did find a Middle Eastern market in Sacramento but I no longer drive so there's no going there either.
Public transportation is only local in our little
country tow.
BarbCA