There are days when I just want Greek food. Not food that I have cooked, but food where I do not have to do the clearing up afterwards.

One evening earlier this year, the sun had been shining all day, and I just craved lemons and olive oil and fish. Then The Greek Larder Tweeted a photo of their fish platter, and that was that.

Called Dining Partner, and we decided to go.

It’s only a bus ride from my work to King’s Cross, and then a short walk over the canal. This time we nearly got blown over trying to get into the restaurant. It’s on the corner and, believe me, the wind fair gusts in through their front door, so do ask for a table away from it. We suffered that night from a raft of people either unable to close the door, or who wanted to stand and hold it open whilst they chatted, and it got very cold after a while as we were sat behind some open shelves that provided no shelter. 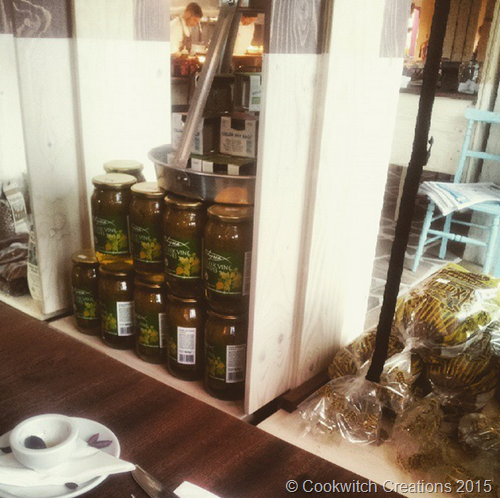 That was the only thing that I would have a moan about, because everything else was perfect.

I’m just going to link to the menu, because there were so many things that I wanted to try, that choosing was almost unbearable, but we managed. Eventually. http://www.thegreeklarder.co.uk/menu/all-day-menu/

We didn’t have bread, because we knew what would happen. Eat all the bread, fail to fit anything else in. I didn’t want to miss anything!

It made sense to order the Aegean shrimp & squid fritto, slow cooked button onions, tomato & Santorinian capers , seeing as that was what had started me off on this route in the first place. 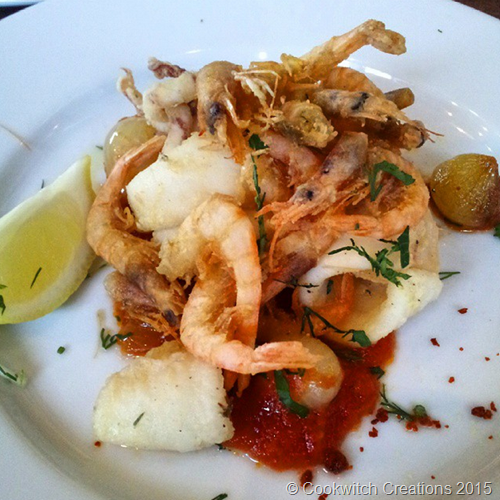 I am not a fan of prawns cooked with their shells on. Ok, cooked, maybe, but served with them on, not so much, unless they are really big and I can shell them easily. These ones did have their shells on, but they were so fine, and delicate that I could eat the whole thing.  So I did. It made my life much easier.

The squid was perfect. Tender, and clean tasting. I’m not sure the onions were needed, but I ate them anyway, as they were so juicy.

The next plate was the home cured salt cold starter, and it was utterly beautiful. Crunchy batter, with salty steamed fish inside, but with a good bite to it. Yes, salty, but in a good way. How your lips taste after a dip in the sea, and redolent of sunny days on the beach. 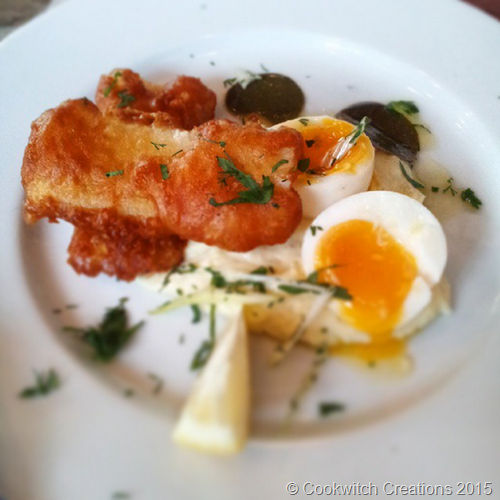 The skordalia underneath it was the best that I have eaten, and I could have eaten a bowl of that on its own with a spoon and some bread. Not too garlicky, but smooth and rich. I just didn’t want it to end.

Now, I will admit that I hated salt cod as a child, but I expect that came from having to spend two days in a house smelling of fish while Dad soaked the plank of cod and then cooked, skinned and deboned it.

I was happily converted by salt cod croquettes in Italy, back in the late 70s, and this dish surpassed that memory.

Simon had the Kefalotiri saganaki, with smoked red onions, and candied chanterelles. 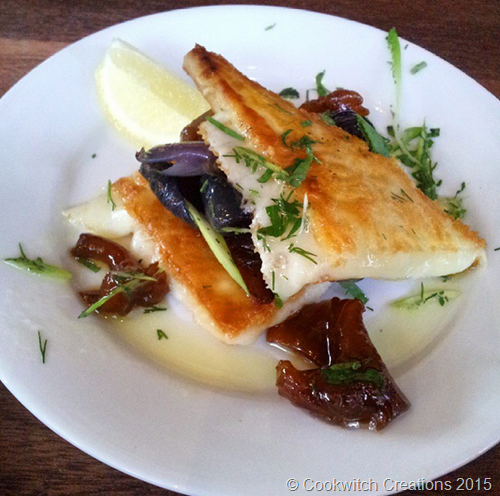 I have never eaten a candied mushroom before, and this was a revelation. Very sweet, but with a musky back tone to it. Plus what’s not to like about smooth and tangy fried cheese?

Next – the mains. I tend to choose by way of what I wouldn’t cook at home. Cuttlefish is not something that I could attempt, mainly because I have a contact allergy to fish and seafood.

The Casserole of cuttlefish and artichokes was destined to be mine. Sounds very simple, and it was but the amount of flavour they got into that stock was unbelievable. Deeply savoury, but light, fresh and lemony with a good hit of herbs. This came under the heading of a ‘loathe to share’ dish.

The cuttlefish was meaty, with a good bite to it but it was not in any way tough. 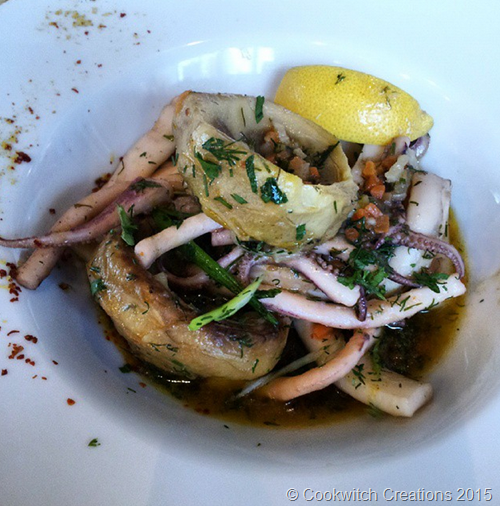 Simon ordered Seasonal filo pie, fennel salad & tzatziki. The filling was spinach and feta, so he was a happy boy. There was a lot of pastry crust, but it was very good pastry, so all was well. 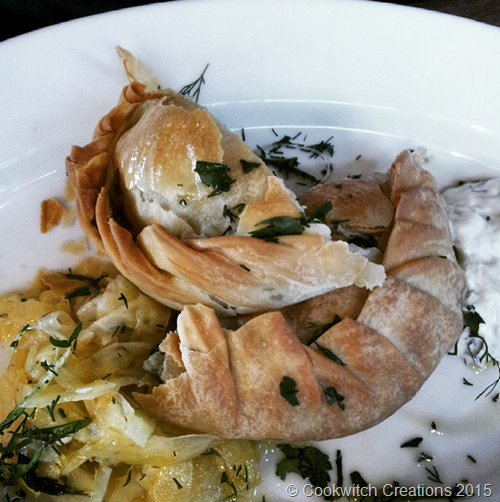 We really did not need the side salad, but it had dakos in it, so…there you go. Plus I adore griddle lettuce, so a salad of Griddled little gem lettuce, fennel, pistachio and Cretan rusks was going to be a winner for me. 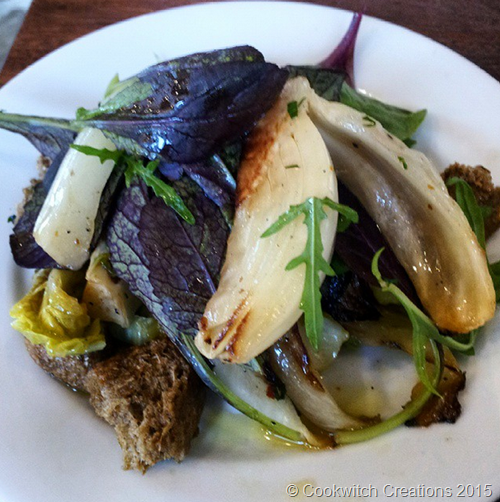 Dessert? Not a chance. It was time to roll home.

All in all, a lovely evening. I even had a foray into the deli counter and bought some lovely smoked metsovone cheese to take home. I’m not allowed to buy olives at the moment, I have enough from my own tree to get through.

Go, and go soon. This place is so good, and I will no doubt be back a few times to see how the menu changes with the seasons. If it’s winter though, just don’t sit by the door!

Read first paragraph and HAD to add: "without smashing all my best plates". ��
I'd eat what Simon ate. THAT CHEESE.
Planning to play with dakos this week myself. Beans, pesto, artichoke hearts, etc. So enjoyed this post as inspiration. And now I want to eat here. Returning to investigate the puds though? ��