Sprouts Are Not Just For Christmas Salad

I love sprouts. There. I said it.

It’s true though, I really do! I used to hate them as a child, and would try to hide them under leftover mash, but then as I got older, and my tastebuds changed, I got to liking them, and then to loving them.

Poor, maligned creatures they are, left on the side, pushed away, invited to Christmas dinner every year but then cast out into the cold of the rubbish bin and discarded. It shouldn’t have to be this way. I’m sure it’s because people have only eaten them when they have been boiled to death, turned into small, soggy globules of waterlogged green, where all taste has long since leached into the water. No amount of butter can revive something like that. It’s too far gone, and should be given a decent burial in the compost heap.

To prevent such tragedy, the spout needs to be treated nicely. It’s a delicate vegetable, that doesn’t need cooking from November to December. A light steam, then a dressing of butter, lemon and thyme, or cut in half, sautéed gently in butter and bacon until they just start to turn soft.

Today I wanted an even lighter way of eating them, and I love getting more greens into my dinners.

Sprouts Are Not Just For Christmas Salad

3 rashers smoked bacon (I had chestnut wood smoked, which struck me as vaguely Christmassy)

I started off by cutting the mushroom crosswise into thin slices, then popped the slices into a bowl with some garlic oil, white wine vinegar and 1/2 a tsp of dried tarragon. I gave it a mix to coat all the slices with the dressing, and then left it to sit. 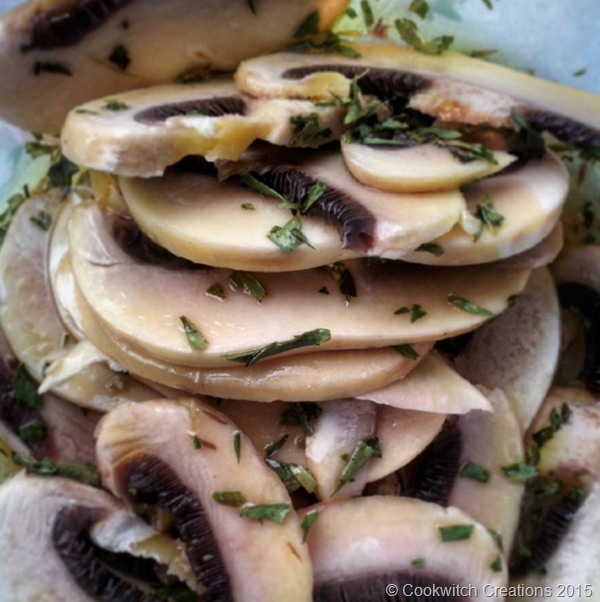 I diced the bacon into small pieces, and put it to cook in a deep pan with a little olive oil.

Then I got to work slicing the sprouts on the side of the cheese grater, but decided I liked my knuckles too much, so resorted to a very sharp knife instead and cut the sprouts in half lengthways, then across into thin slices.

Meanwhile the bacon had started to crisp and let out its fat, so I threw in the chopped spring onions, and mixed them in well with the bacon.

Once the sprouts were all sliced, I popped them in the pan, and cooked them quite fast, using two spoons to toss them around and coat them with the oil. (Thank you La Nigella for that tip)

Once the sprouts had started to soften, I tipped the whole lot into my 70stastic leaf serving dish (yes, it is that old) put the mushrooms on top and then poured the rest of their dressing into the hot sprout shreds.

This dish is best eaten while it’s still warm, it’s really not as good cold. 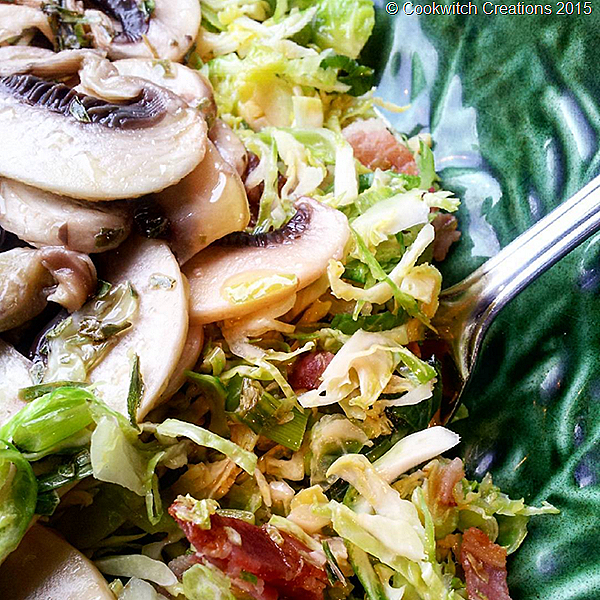 Give it a go. No sprout should be alone at Christmas.

Posted by Lisa Cookwitch at 8:27 pm

I know what you mean! Made a portion of roasted honey balsamic sprouts for a party of 6 last week and ended up eating them all!! Not that I mind😄!

I'm getting a bit addicted to the things. Green last week, purple this week - which I can highly recommend - and sprout flowers, sprout tops...I seem to have an urge to eat all the green things!