I'm a great believer in comfort food. I don't mean the usual British nursery or school dinners style food - all sponge puddings, mashed potatoes and a lack of chewing, though they most certainly have their place - I mean all kinds of food that give comfort because of what you, the eater, associate them with.

More often than not it will be foods of your childhood, whatever and wherever that childhood was for you, but it can also mean foods that you simply associate with feeling safe, and happy. Holiday meals near the sea maybe, with that odd tang of salt on your lips, or that first time you went out to eat in a restaurant on your own, with your mates not your parents, feeling oh so grown up as you handed over your cash in Pizza Hut after playing Salad Bowl Structural Integrity. The first ever popcorn at the cinema, or the novelty of eating something in a foreign country, that you have never, ever tasted before. That's the thrill of discovery, and those early tastes get imprinted. To be fair, they do not always imprint in a good way, but you can mostly overcome that if you try. You are allowed to dislike things, and there will be some things that you simply cannot bear, no matter how beautifully they are cooked.

Comfort foods for me are usually the things that my nan or Mum cooked whilst I was growing up, but sometimes, not often, a dad dish creeps in.

He didn't cook that much for me, as he was rarely around when I was awake. Old fashioned barbers keep long, long hours. Every once in a while, on a Sunday, he would cook loukanika sausages, with fried potatoes and eggs. I would eat the potatoes first, then the sausage - having tried to pick out the coriander seeds - and then the eggs. These days I seem to eat the eggs first.

This weekend I'm oddly discombobulated, as Tex is away, and I have to work on Sunday, so my routine is shot. Add to that attending a Terry Pratchett memorial - all emotion and joy and laughter and sheer grief rolled into one - and it lead to me wanting food to soothe, easy enough to put together, a dish that wasn't going to try my patience, and wasn't going to take too long either. I knew I had some Cypriot sausages in the fridge, though not loukanika, and after a bit of a rummage I found a tired old potato that was begging to be used before it turned up curly spindly rooty toes and died.

Heat the olive oil gently.
Pat the potato cubes dry, and add to the pan.
Cook them on one side until well browned, turn them over, sprinkle with a little fine salt, and cover so they steam and cook through.
When they are browned all over and tender all the way through, push them to one side, and add the sausage slices. They will shrink as the fat comes out.
When the slices look cooked, drain the fat off, move the sausages and potatoes to one side of the pan and then pour the eggs in.
Stir to scramble the egg as it solidifies, then gradually mix the cooked egg into the sausages and potatoes.
Serve and eat as soon as you can. This is one Greek dish that is better hot. 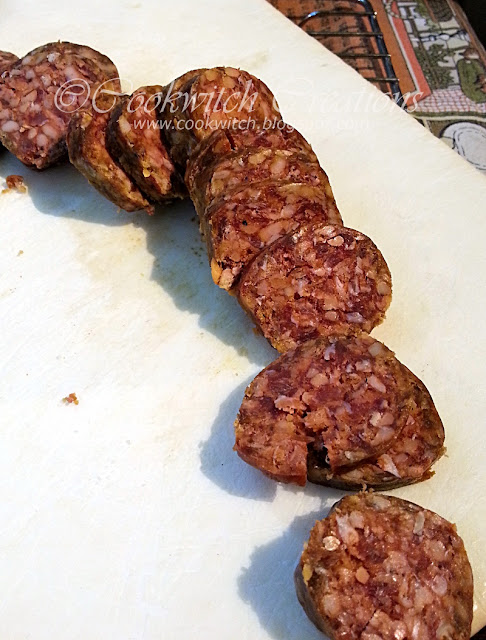 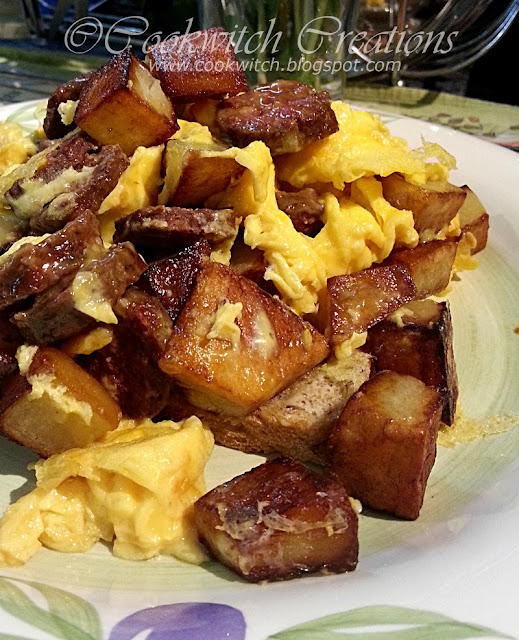