I’ve been reading a lot of the raw/free from food blogs lately, mainly because their Instagram feeds are just so pretty that I get drawn in, but also because Tex and his dad can’t have cream or milk, and Pa also can’t have wheat, so dairy and wheat free free desserts are useful.

I’d managed to amass a large amount of plain cashew nuts, and they needed using up, so I thought I’d try my hand at a cashew ‘cream’.  This is not vegan, as it has honey in it.

(Notes to self: your blender is not powerful enough for this. Use the food processor. It’ll save you a lot of time, poking and effort.)

8-10 heaped tablespoons of date puree (literally just whatever dates you can find, soaked overnight if quite dry, and then blended with cinnamon and enough of the soaking water to make a soft paste)

I blended the cashew nuts – eventually – into a smooth cream. I had to add a fair bit of the soaking liquid to get them to process. While it was blending I added in 1 tsp vanilla, and 2 tbs clear honey. When I do this again, I will probably blend in more vanilla, and also some coconut milk powder or some coconut condensed milk, plus the pistachios, as it needed more flavour.

I scattered pistachio slivers on the bottom of a cling film lined loaf tin, spooned in half of the ‘cream’, then added more pistachios.

On top of that I dolloped date paste all the way along the middle, then sprinkled some peanut powder that I had over that.

The rest of the batch that was still in the blender then had a good few tablespoons of the date paste mixed in, then 1-2 tbs of cocoa. Add 1 tbs first, taste it, then adjust it. Cocoa can overpower a bit.

That mixture then got poured on top of the white layer.

I pulled the cling film up and over to cover, then popped the whole thing in the freezer and forgot about it for a month...

When we tried to cut it, it did put up a fight. The date layer was easier, so I started there and cut down to the white layer instead of the other way around.

The date/cashew/cocoa layer was really lovely. The dates gave it softer, more rich texture. The white layer was far more like a sorbet, and did need a touch more sweetness. I think perhaps a paste of dried soaked mango would work rather well in it, and serve to soften it a little. Though it would make a brilliant ice lolly, as it didn’t melt as fast as the cocoa layer. I have considered getting some lolly moulds purely for this.

All in all, I really liked it. You do have to leave it to stand out of the freezer for a good ten minutes so that you can cut into it though…I used a hot knife, and it went through in the end.

I’m so happy with it that I’m going to enter it for Kavey Eats June Bloggers Scream for Icecream. 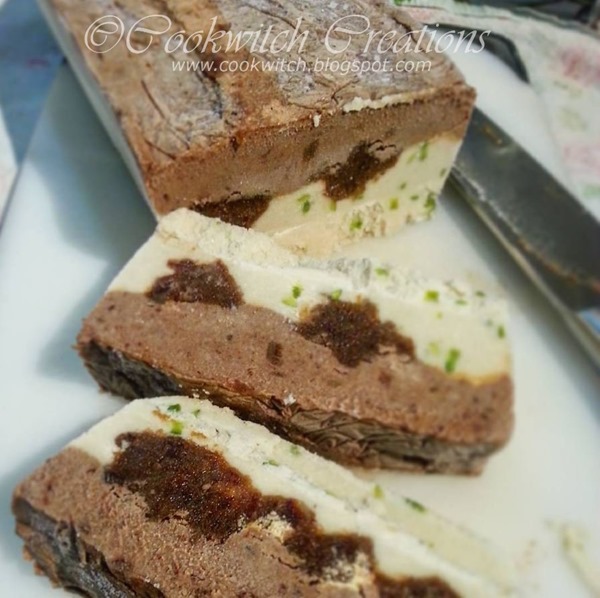 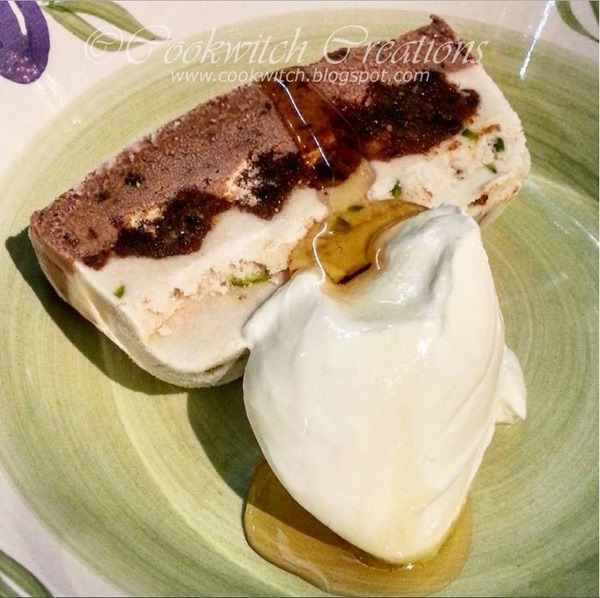 Posted by Lisa Cookwitch at 4:21 pm

Gorgeous and love the notes on what worked well and what you'd do differently. Looks delicious as it was though! Yay get lolly moulds! Or plastic cups which is what I use!!

That looks like a super special treat for a lazy weekend spent home cooking. I love the layers and colours in it. Beautiful!