I’ve always had a difficult relationship with bread. Don’t get me wrong, I love eating it, but the baking of it was always a bit of a mystery, and a challenge.

With regards to eating it, I like it rather too much for my own good, to be honest. I’m one of those lucky people who, medically, should really eat a low carb diet. Pesky endocrine system.

Bread is now a treat for me, and so I decided that if I do eat it, it has to be really GOOD bread. Not for me the products of the Chorleywood process high speed mixers, mainly because I don’t like the texture, but also because it leaves me feeling like there should have been something else in there. There seems to be no substance to it. A bit like when you read an eagerly anticipated book that never seems to get anywhere. You reach the end thinking “Was that it?” (I will add a disclaimer that I am very well aware that sometimes, the cheapest of the supermarket loaves is all that some can afford. This is not denigrating them, this is about MY personal choice.)

Bread used to be a proper ‘filler upper’. If you only had bread and small beer, you needed that bread to be substantial, to keep you going. Can you imagine a field worker or manual labourer eating two slices of Mother’s Pride or Tesco’s value and then going on to do a full day of very physical work?

Bread should be flavourful, and have a density to it, not squish to nothing and dissolve if it gets wet.

I will admit that it does depend on what you need it for, of course. A light, crisp baguette, just with butter, is a thing of beauty, though fleeting as the properly made ones last a day only. They go dry very fast.

A dense, hearty wholemeal loaf can be spectacular, eaten with chunks of cheese and pickles. The homeliness of a soda bead, quick to make and oh so fast and easy to eat.

The sourdough, the original bread more than likely, with its long leavening and proving, brings a tanginess along with the trademark holes in the body of the bread, and then that lovely chew to the bottom crust, and the crackling crisp to the top.

Thanks to the no knead crock pot method, I have been having fun making extremely nice bread at home. But prior to finding that method, I bought two of Paul Hollywood’s books, and worked through some of those recipes. He has a very good way of explaining what to do, and how things work. For me, his recipes took away what I now realise was a fear of working with bread dough. A nervousness that I would somehow spoil whatever I was making and it would all collapse if I was too rough with it/not rough enough/got stuck to it.

I am much more confident in my bread making now, thanks to those recipes. I’m also a convert to using cold water for the liquid, not warm, as it makes the yeast work harder, and seems to develop the flavour much better too.

Talking of flavour, please do not skimp on the salt. It really is needed in bread making, or the taste is just flat and doughy.

I do like the flavour that the overnight or longer rises give. They use very little yeast, so the dough is forced to work hard, and on one occasion, it was akin to sourdough, without using a sourdough starter. I might even give that a try again.  Who knows.

This week I decided I wanted to bake some rolls to go with some Turner and George burgers on Friday and some Cookwitch-made burgers on Saturday. I’m not a huge fan of brioche style buns, simply because they can get a bit soggy too fast. I wanted white, soft rolls, but fairly substantial.

Put the flour, salt and yeast in a bowl (take care to separate yeast and salt).

Add the butter and rub that in a little so it’s distributed.

Add 240ml of the water and mix using one hand like a dough hook.

Trickle in the remaining water and continue mixing until it comes together. I added a little too much, but just added a tsp of flour to bring it back.

Knead until it starts to feel springy. I oil my hands with olive oil, which really helps with any stickiness. Knead for around 4-5 minutes. (I’ve timed this and made it more fun by listening to old rock songs. It’s usually about 2 Lemmys and a Black Sabbath. Or one Hawkwind.)

Form the now smooth dough into a ball, put into an oiled bowl, cover with cling film, or put a plastic bag over it,  and leave to rise for about 2 hours. It may double in size faster if the temperature is high.

Turn out the dough on to a floured surface and flatten out into a square.

Divide the dough into about 12 lumps and shape each piece into a ball. (I will admit to weighing the dough, and then weighing each piece. You do not have to do that!)

I use an old store card as a dough scraper/cutter, and it works really well! Each lump was approximately 71g. 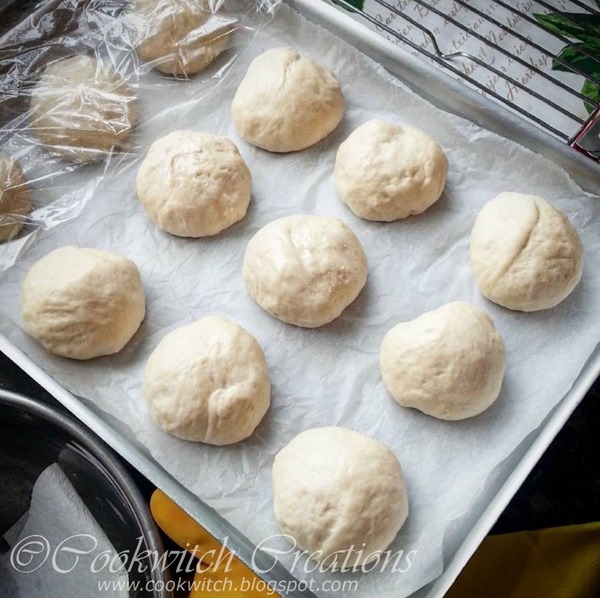 Pop the rolls onto a lined baking tray and cover with oiled cling film* for about hour until they have proved again. 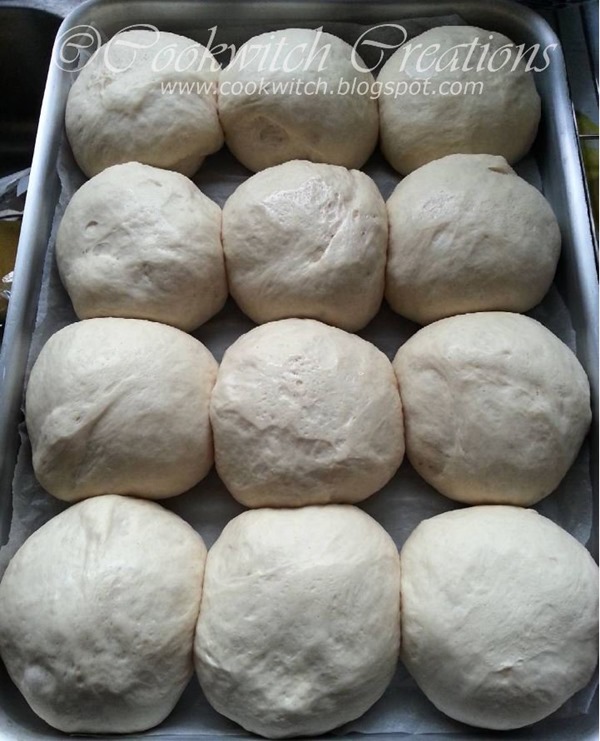 When proved, fill the roasting tray with hot water and pop the rolls in the oven. The steam from the tray gives them a nice crust.

Bake for about 15 minutes until they are golden on top. Tap the bottoms and if they sound hollow, they’re done. Rest on a wire rack, so the bottoms don’t go soggy. 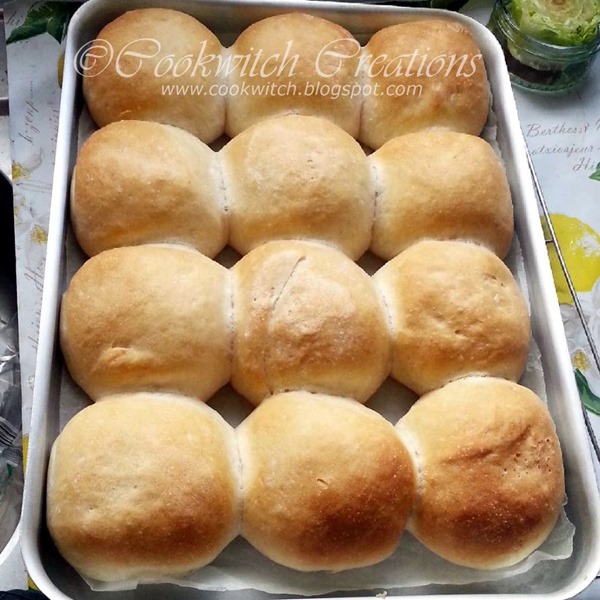 Posted by Lisa Cookwitch at 7:00 pm