I saw this when I was looking for another recipe, and it got stuck in my brain. I always think cucumber is such a woefully underappreciated vegetable, that I am happy to find more ways to use it. Cucumbers aren’t just for salads, even though I find them to be one of my must have salad ingredients.

Traditionally this recipe uses pork mince, but I didn’t have any of that. I did have some pork belly strips, so I just cut those into very small dice.

3 smallish pork belly strips, diced (freeze them until just firm as makes it much easier to dice)

1 tsp rice wine or dry sherry or even brandy (I actually used kommandaria wine, as that’s what I had)

Cut the cucumber lengthways into quarters, and cut out the seeds. They are just too watery.

Cut the cucumber into whatever size chunks you want, then place into a large bowl and add the salt. Mix and toss until the cucumbers start to release a little bit of water, about 1 minute. Let them stand for 30 minutes.

In a small bowl, combine pork with the soy sauce, wine, five spice powder and cornflour. Mix well and let sit for at least 30 minutes (you can even do this the night before you want to cook.)

Drain cucumbers and rinse well under cold running water,l to get all the salt off.

Heat 1 tbs groundnut or sunflower oil over high heat until smoking. Add marinated pork, spreading it out with a spatula so that it makes a thin layer. Let cook undisturbed for 30 seconds. Using a spatula, break up the pork if it has stuck together. Continue stir-frying until the pork is cooked through and golden brown. Transfer to a bowl and set aside.

Add another spoon of oil to the pan, bring it back up to heat, then add the cashew nuts, and spring onions, plus the chilli and garlic and cook, stirring constantly so that the garlic doesn’t burn, for about a minute.

Add cucumbers and cook, keep stirring, for 2 – 3 minutes. Return pork to the wok and mix that in well. Add 1 tsp oyster sauce, continue cooking and stirring until the cucumbers begin to look glossy, about 30 seconds, then serve either on its own, or with some rice. 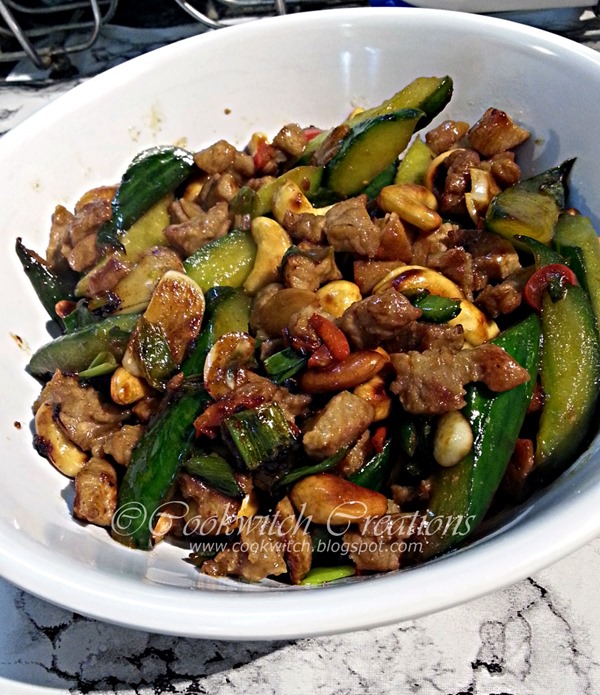