Greek (Orthodox) Easter came and went this year, and more or less passed me by. When you're the only Cypriot around for miles (that I know of, anyway) there doesn't seem to be a lot of point in doing much about it. If we had an Orthodox church near, I'd probably go, but we don't, and it's a very long way to North London.

Cypriots usually make tons and tons of Easter pastries, ready to break the lenten fast. It's a team effort, as there are so many made. I have made them myself a few times, but it is pretty slavish work, and this year I did not have the energy. I made lots of buttery, orange scented koulourakia biscuits, roasted some lamb, and called it done.

I still wanted that flaouna filling taste though. Mine is made from a memory of my Auntie Helen's ones, so I don't know if they are authentic or not, but the taste is as near to what I can recall. It has been a very long time since I ate hers!

So I was wondering what to do with the stock of halloumi and mint I'd laid in, just in case I found the inspiration to make the Easter pies. The inspiration never showed itself, but I still had the cheese. (Face it, I've always got the cheese.) I also had a small seeded loaf that needed using, and I recalled making bread cases for something else, and liking them quite a lot.

Bank Holiday Monday afternoon came along, and off I went.

Cut the crusts off the bread, and roll each edgeless slice out until it's very flat
Oil the bun tray very well.
Brush each bread slice with olive oil, DO NOT STINT, and press into the tray hollows, making sure each slice goes all the way to the bottom. (my bun tray was quite shallow)
Bake at 170C fan until crisp and slightly golden.
Blitz the cheeses for a few goes, then add in the mints.
Blitz again.
Add in the sultanas, cinnamon and the eggs, blitz until they form a cohesive but lumpy paste.
Put a decent spoonful of the filling into each bread case, then bake at 170 again until puffed and golden brown.
I like these best lukewarm, but it's up to you! 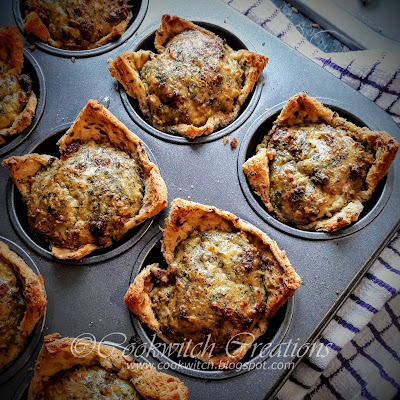 Posted by Lisa Cookwitch at 8:33 pm