As I have mentioned before, I am a bit of a spice addict. Not chilli spices, as I am not a great fan of the old searing heat, but the herbs and spices that can add so much flavour to every day food. I have a great deal of time for Middle Eastern flavours, and so, knowing this, my lovely colleague gave me a present from the Real Food market that was held at the South Bank this weekend. I am now the proud owner of a jar of wild sumac, and a jar of the most fragrant Zat'ar spice mix from these people: http://shop.arabicafoodandspice.com/products/zatar-special-blend

Zat'ar won the coin flip to decide which one got used tonight. I took some chicken breasts, cut them into big chunks, then added 1/2 a small tub of Greek yoghurt, a drizzle of olive oil, plus 3 tsp of the Za'tar and 1 tsp of Ras El Hanout. ( http://shop.arabicafoodandspice.com/products/ras-el-hanout )Mixed it well and left it to sit while I heated up a cast iron griddle pan.

The chicken was just cooked on the pan until it was done, and had gained some tasty griddle marks as well.

The olive oil was looking at me (I'm nearly out! Noooo!) and so I mixed a teaspoon of the zat'ar in with some oil, then brushed it over a slice of white seedy bloomer. I set that to toast under a medium grill. When it was done it got cut into squares and then I served that as a garnish on the chicken and salad.

I have been won over by this spice mix. Really. It's salty, and mellow yet with a goodly whack of herbs that sent a beautiful perfume wafting through the kitchen as it was grilling. Perfectly wafted, I might add, by the warm breeze that was coming in through the open window. 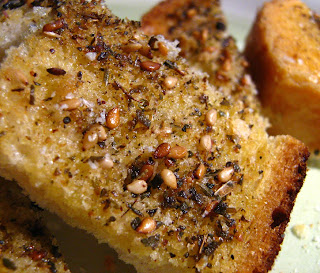