It was Boyfriend's Birthday last week so A Meal was arranged. K and I had read reviews of a few gastropubs, because that's what we do for fun, and The Tommyfield looked rather good. A booking was made and so on a very cold Saturday evening Boyfriend and I set out from the exotic climes of East Croydon and tootled an hour across London to darkest Kennington. It's only a short walk from the tube station through a pretty square.

Anyway. The one drawback of the pub was evident at the bar. The music is way too loud. If you cannot hear what your customers are ordering then you need to turn it down sharpish. I know it's all hip and cool and happening but, well, really.

The chairs at our table were very comfortable, which is a bonus point in their favour because bad seating makes for a Lisa who ends up not being able to walk. This did not happen! Hurrah!

After the usual umming and aahing over the menu - http://www.thetommyfield.com/menus.php?menu=6741 - (grocer's apostrophe on pie's!) we all chose what we needed.

The Pies of the Day were beef and stout, and Shepherd's.

ALL excellent. The one thing I will say is that the toast needed butter. It was very thick white bread, gorgeous flavour but...well, butter please! The damson chutney was amazing, sweet and unctuous. I could happily have eaten more of that.

The croquette was creamy but not too much, and had a lovely smokey flavour. Good crisp coating too. That disappeared very quickly indeed.

The venison was very good indeed. Properly hung as the gamey flavour was very evident, and the meat simply fell off the bone. The parsnip tart was very nice too, though K felt it was a bit too sweet for her taste. The filling was a little too liquid, but I'd rather that than dry. The pastry was very good, and there was a decent hint of nutmeg in there. That's proper.

My devils on horseback were quite dry, and I felt that more gravy was needed with the meal.

The sides were nice again but the brussel tops needed either butter or bacon (we couldn't decide) and the clapshot, though incredibly tasty, well, that needed butter too. We came to the conclusion that we should just have asked for some butter... 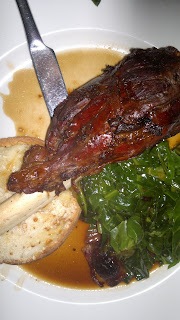 The plates weren't really hot enough so everything cooled down quite fast though that didn't stop us.

I have it on good authority that the sea bass (with a side of chips) was truly delicious. I tasted a bit and pulled a face but that is totally a personal preference. The skin was brilliantly crisp though. I liked that bit!
Two of the mussels were closed, so really should not have been served but that is easy to miss I expect. Still, keeping a watchful eye out would be better. (I pointed out the closed ones to the waitress as people who don't know might have forced them open and eaten them That could be bad.)

It certainly disappeared fast enough and there were appreciative noises. It looks so very pretty too. Brussel tops were obviously in the veg box that week. 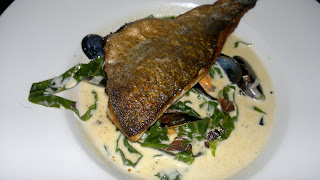 The sticky toffee pudding was very light indeed, and had a decently toffeeish flavour. A lot lighter than anyone expected, to be honest, but seeing as we'd eaten half a bambi that was a good thing.

The crumble was excellent. Beautifully tart, with a good crunchy topping, and sweet pieces of apple very evident.

HOWEVER. There was no damson ripple ice cream. A wee pot of extremely good vanilla, yes, but where was our damson ripple? We asked if they had run out and were told, with very many apologies from the brilliant waitress, and a promise to bring it to the attention of the manager, that the crumble has always been served with vanilla ice cream, so the damson ripple must have been a mistake on the menu. We felt rightly cheated, seeing as it was that tantalising promise of deliciousness that had swung our choice. It's still on the Christmas menu on the site.
http://www.thetommyfield.com/menus.php?menu=7055 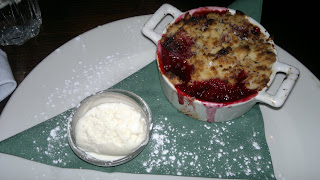 Back to the music problem; I had asked for a cup of tea, and it didn't turn up. When we enquired about it (different waitress) she said "Oh did you want it with your dessert?" Well, yes, I did really. So off she went and came back with three knives. She couldn't hear what we had said, so assumed cheese.
Really Tommyfield, turn the music down! I'm an old Goth and Rock clubber, and love my loud music but for heaven's sake guys, when it gets in the way of service, and your customers have to shout to each other, you are doing it wrong.

The tea, when it turned up was delicious though. Tea Pigs English Breakfast, gorgeous!

The bill wasn't too bad. Took me aback initially but then I forgot that there was alcohol involved as I never order it. All of that food, plus 4 pints of Thatchers, a port and a dessert wine and service (already added in btw) came to £123.00.

Our very perky blonde Northern Lass waitress was awesome and great fun, and we could have chatted to her all night.

All in all, were I in the area I'd go back. If they turned the music down!

Edit 16.12.2010: the nice people at Renaissance Pubs have read and responded on Twitter. Now THAT is service. Thank you guys!
Posted by Lisa Cookwitch at 10:36 pm