I was actually going to go to bed about half an hour ago and then I started looking at the photos from my meal out on Friday. So now I'm hungry again despite eating the last of my brown rice and gammon bake.

Lovely New Person (okay, Col from hereonin) and I had a weekend date with East Croydon, weekend just gone. We were tempted by Miso right by East Croydon station but it was busy being a Friday night and so I opted to to go Il Cavallino, nearby in Lower Addiscombe Road. It's been a favourite of mine and Boyfriend's for ages, being quiet and comfortable, with excellent food and a wonderful host to boot so it was a sad shock for me to find that it was no longer there but had morphed into Red and Black. After a moment of "Oh dear!" we decided to give it a go anyway as it looked warm and inviting.

I am ever so glad that we did because we ended up having one of the most excellent dinners. They still do excellent pizzas and pasta but the new things are just gorgeous. The staff are very sweet, even apologising for having to move our hands as they put the food down. (Yes, yes, we were holding hands across the table, bleurgh I know.)

The menu is small but perfectly formed, though I did wish that I had been allowed to proof read it for them.

We began with three starters and it was a struggle to choose even then. A plate of Italian cured meats, with a small pile of olives and cornichons which I very lovingly saved Col from eating, a bowl of sweet and tender king prawns with garlic and parsley on fresh rocket, and then a plate with the biggest chunk of deep fried brie I have ever seen. Fair took us aback that did.

The meats were of good quality, the salami nicely spicy and the olives good and garlicky. The prawns were luscious - not too much garlic so the natural flavours came through. I loathe rocket as a rule but this was so fresh that it tasted just right with the garlic/olive oil juices from the prawns. The brie was delicious, although it could have done with being cooked for a wee while longer but with that large a wedge I can see how it's hard to judge! The cranberry sauce with it was very nice indeed. It tasted home made, and was tart enough to cut through the creamy brie. There was not a hint of greasiness at all, and the crumb was utterly perfect and uniformly golden brown and crispy.

I am afraid photos did not happen there as we were too hungry to pause. 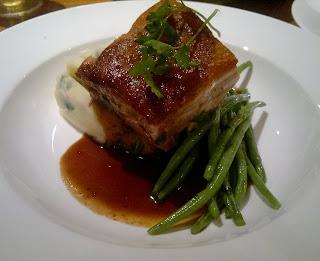 This is a very generous portion indeed. I really should have posed something next to it to show the size but, er, I was in a hurry to dig in. The meat melted and pulled apart into silken strands. The mash you can see there is a spring onion version and that was creamy, but not sloppy, with decent sized but soft onion pieces and a deep, buttery flavour. The green beans were cooked perfectly, with a bite to them but still tender. I could not stop making "Mmmmm" noises as I ate because it was so darned delicious. The gravy, jus, call it what you fancy, was rich and full flavoured, a proper porky flavour very evident.

I took the crackling off and set it aside as that was to be my last piece of the feast. Joy of joys, there was still that sticky, full of flavour layer of fat underneath the crackling, and oh how I adore that. Please, leave the fat alone. It's meant to be there and I get quite cross if people remove it. Having enjoyed the meat so much, I was wondering if the crackling could compare and it absolutely did. Thin and crispy, with a slightly chewy texture but so easy to crunch through. Marvellous.

Col had lamb fillet with butter beans and spinach. 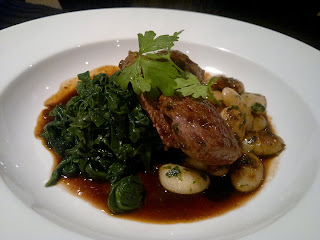 That description just doesn't get across the depth of flavour in the dish. The meat was heady with rosemary but there were no bits of that notoriously woody herb to be seen. The fillet was superbly cooked and very tender with another rich gravy which tasted of the very essence of lamb. Knockout, all of it. I have had food in 'upmarket' Central London restaurants that could not hold a candle to this cooking.

On the strength of what had gone before - and aganst the better judgement of my stomach - we chose dessert.

My chocolate brownie was beautiful. 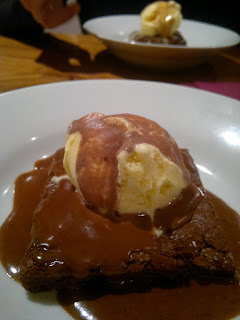 A thin slab of dense chocolate cake with chewy edges and a gooey centre. Any bigger a serving would have been way too much. I loved how the chocolate sauce almost froze on the ice cream whilst the ice cream itself was pooling down over the sides of the brownie. Heavenly.

Col chose a sticky toffee pudding with nuts because he has hollow legs. The smell wafting across to me was delicious. 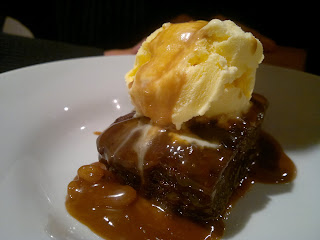 I got to try a bit, but Col did have the "Mine! All Mine!" look on his face. The sauce was so smooth, I suspect condensed milk. The pudding was rich, but still light and the nuts had soaked up a goodly amount of the sauce, whilst still having some crunch.

After all of that we were beaten. Okay, well, Col still had a hankering to try their seafood linguine but that may just have been a pipe dream at that point of the evening!

All of that loveliness and taste, plus 2 Peroni beers and a soft drink came to £53.

We aim to go back again and work our way through the rest of the menu. Sadly they do not have a website yet and I cannot remember what else was on there, so I have to go back, right? It's a duty!

DK - it was such a gorgeous meal, we were both blown away by it. Will be revisiting!