That's the leftovers done with.

Rice and gammon bake. That's what I had in mind.

Now. I have learned a lesson here and that is that brown rice takes AN AGE to cook and far more water than white rice does.

I have cooked brown rice before, and never had any such trouble but my word, I must have had what a friend called 'super 'ard bastard rice' this time around. Nevertheless I persevered with a certain sense towards the end of die you bugger - and it did turn out rather beautifully in the end.

In a dutch oven or oven safe casserole dish (must have a well fitting lid) fry off the sliced onion in olive oil, add in the rice and stir well to coat with the oil. Add in 1/2 tsp butter here. It's just used as a flavouring.
Add in the spices and the gammon cubes and mix very well.
Pour in the chicken stock, bring to the boil, cover with a very tight lid and then bake in the oven.
Take lid off after an hour and swear at it. Put it back in the oven.
I used 170C in a fan oven, and had to bake it for nearly two hours all told to get the rice to soften and absorb the liquid.

It's a bit of a hit and miss affair. Add a bit more liquid if it needs it, but it may not...*rolls eyes*

It's dark and spicy and even worth cooking a bit of gammon just to make it. I know I could have used white rice but brown seemed to fit better with what I wanted it to taste of. It's a very comforting dish, and it made loads. Lunch tomorrow! 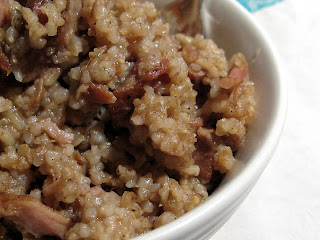 Posted by Lisa Cookwitch at 9:46 pm

Tales from the Tiny Kitchen said...

Mmmm this sounds really good! Wish I had a gammon hanging around...

Ooh nice - I'm always wondering what to do with ras-el-hanout :)