Yes, it has indeed been a mission. I was determined to make some for no reason other than I wanted to make some. I know you can buy them for silly money but it's not quite the same, plus the house smells so nice when they are baking. I never remember to get around to Greek Easter baking, but I thought I could at least make the effort and uphold the Brit part of my ancestry. Also, I have concerns with my baking prowess. I don't have any and I want to get some!
I tried one recipe twice and I think the dried yeast was old because the dough was just not elastic at all. They tasted good though. 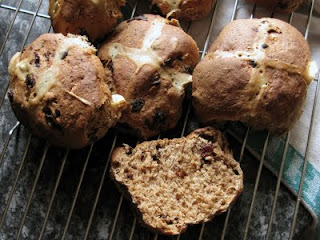 Then I tried another one, with different yeast - dried but not the fast action one - and they were better. I used wholemeal strong bread flour so they were heavy, but tasty. I used golden marzipan to make the crosses and that was incredibly nice but I still wasn't satisfied. 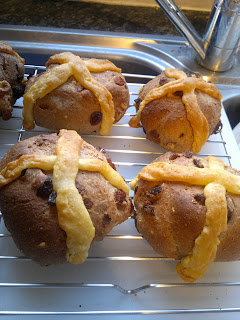 Then, oh joy of joys, a friend had ordered some fresh French bakers' yeast to try and she very kindly split it with me, so today that's what I used. I found a recipe that my friend Mark gave me, because I know it works, and off I went. (Mark put pentagrams on his, I have little patience for piping crosses, let alone anything more complicated!) I did tweak it a bit as I had all that wholemeal bread flour to use up.
The yeast is wonderful. The dough had a gorgeous elasticity, the buns rose, and they have a lovely, airy texture whilst still having a substantial feel to them. A well rounded, proved dough is a wonderful thing.
Hot Cross Buns: The Revisit 4.0


I melted the butter into the milk, let it cool to hand hot, then beat in the egg and added the honey and the yeast. Then I ignored it. It raised a pale yellow, fluffy foam that looked like whipped egg white so I emitted a small cheer.
In a large bowl, I mixed all the dry ingredients together, added the golden yeast mixture, brought it together with a butter knife and then tipped it out onto a floured surface and gave it a good kneading. About ten minutes or so I think, adding a touch of flour if it got too sticky. When it started to spring back, it was time to divide it up into balls. I even weighed each one so I knew they were the same size. Next time I will make them smaller. This made 8 large buns.
I placed the buns onto a baking tray lined with silicone non stick baking parchment (Thank you Lakeland!), covered them loosely with cling film and then went away again. An hour later and they were proved. Rounded and smooth and plumptious.
I made the cross mixture up in a small ramekin, tipped it into a small ziplock bag, twisted it up into a cone, snipped the corner off and rather inexpertly piped on the crosses.
Into the oven they went (170C fan/200C non fan) without a glaze as neither of us like the stickiness of that and then 20 minutes later (with one turn because my oven cooks unevenly) there they were. Light, airy, golden brown and delicious. No longer tasty hockey pucks, but proper, actual BUNS. Buns of spiced joy. Oh yes. 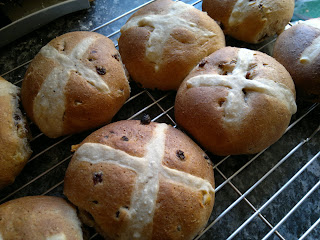 This phone photo was taken and sent to my man Col because I was so excited I had to share! 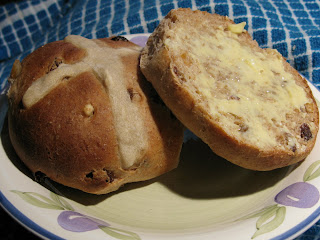 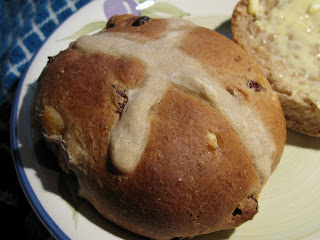 I added vanilla essence to the cross mixture as flour paste just isn 't that tasty on its own.
I really want to make some more, but I need to go to the shops tomorrow as I have used up all of the mixed spice in the house. I can see this yeast bakery thing becoming an addiction, quite fast.
Posted by Lisa Cookwitch at 9:24 pm

Hi Lisa! How are you? My your Hot Cross Buns look delicious. Give me some butter and I can make a meal out of these! Let me know when you start shipping world wide.

Hello Mario! I am doing fine here, thank you.

Now if I could only rely on my baking turning out well every time...these buns are quite addictive. I made six batches in two weeks all in all. :)