Pork Belly, good for what ails ya.

I am a great fan of pork belly. There is something so very satisfying about it, so ultimately savoury and luscious. I love the contrast between the tender meat, the slippery fat and the salted crunch of the crackling. The treat of eating the flavourful meat from off the bones is also a very satisfying thing.
A few nights ago, I read this. http://www.meemalee.com/2011/05/pork-belly-midnight-snacks-and-pork-off.html


MiMi is a woman who knows her pork. All round good egg, mischief, awesome cook and lover of Andrew McCarthy, we haven't met in person yet, but I feel it is only a matter of time. That blog entry put pork belly front and foremost in my mind. So much so that it wouldn't go away. Not just any pork belly, no. The one that she referred to within that blog post. THIS one, in fact.
http://www.meemalee.com/2009/12/harissa-roast-pork-belly-recipe.html


There was no getting it out of my brain, so there was nothing for it but to buy some pork belly when we went to the butcher shop yesterday. Mark the Butcher scored the skin deeply for me - he knows by now exactly how I want it done - and then home it came with us. Oh yes.
Last night I got all the ingredients together for MiMi's recipe, but this is me, and I tweak things so I customised it to how we like it.
No harissa, because I am not a fan of spice heat. Yes, yes, I know, I'm a wuss. Also, I didn't have any. I also didn't have any fruit sugar, so I used golden caster sugar and used white pepper because we like that better than black.
Now. These are mainly MiMi's words, because she explains it better than I do, with some of mine mixed in. The ones in italics.
Preheat your oven to 150°C / 300°F / Gas Mark 2. Mine is a fan oven, but 150ºC in it worked just fine. Later this will become amusing.
Score the skin on your pork belly using a sharp knife like a Stanley knife, if it hasn't been done already. *waves at Mark the Butcher*
Place the pork on a rack in a roasting tray, skin side up, and pour boiling water over the skin, so the grooves in the skin open up a little. Go oooh, why didn't I think of this before. Pour away the water and remove the wire rack temporarily so the pork is sitting in the tray.
Blot the skin dry with kitchen paper.
Put the ras-el-hanout, salt, sugar and pepper in a pestle amd mortar and grind so that the sugar is finer. Canny eh?
Add the olive oil mix to a paste and rub all over the meat, making sure to work it into the grooves of the skin.  I used a pastry brush to get it deeper in.
Put the wire rack back into the tray, place the pork on top, skin-side up, and then drizzle the vinegar over the skin. This is a Chinese trick to help make crackling crisper - don't know if it actually does anything, but it makes me feel better. It worked. It so worked.
Pour the water into the tray from the side, not touching the meat (this helps keep the pork moist by steaming it very gently).
~~~~~~~~~~~~~~~~~~~~~~~~~~~~~~~~~~~~~~~~~~


Me now. And here the fun started. It went into the oven, and I tended it lovingly for two hours. Okay, I stared at it every so often. It looked lovely, smelled utterly delicious, and I even set an alarm so that I knew when to switch the oven to grill and crisp up the crackling.
At the end of the 2 hours, I went to turn the grill on, and up, for the crackling. This is when I noticed that it had been on the grill setting all the time. I had, essentially, slow grilled the pork belly. Hmm. After an initial panic of OMG what if it isn't done enough, I turned the grill up anyway until the crackling was burnished like it had shellac on it but it wasn't crispy.
It was very late, and so I took it out of the oven and let it stand overnight. By the next morning, the crackling was crispy. Hurrah!
I stripped off the crackling, and put the belly back into the oven to grill the soft fat on the top. Husband ate some of the crackling. I ate some of the crackling. It was very lovely crackling indeed. Next time I may use a touch more sugar and more Ras el Hanout. Indonesian katjup manis (a thick, dark, sweet soy sauce) may also feature.
Once the fat had crisped, I cut the belly into slices, removed the bones, cubed it, photographed it, and then ate it in big, juicy, slippy chunks in front of the computer, posting photos of it to make people hungry. My keyboard is fine and I felt much, much happier afterwards.
Here, for your delight, are some of the photos. Thank you, MiMi, this was all your fault. :D 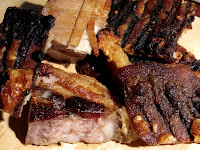 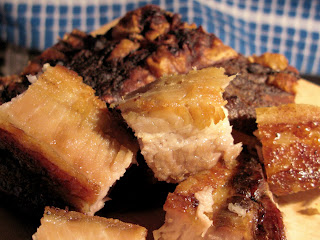 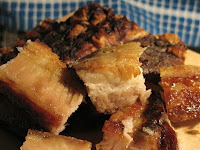 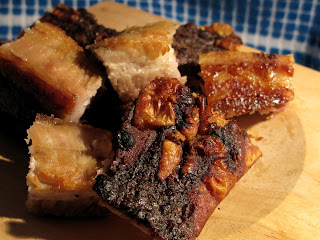 Posted by Lisa Cookwitch at 7:26 pm

And that means I have achieved my aim. :)

If MiMi was a god (or godess, more aptly) she would TOTALLY be Godess of Pork, innit?

Awww, this is so cool. Lisa - thank you so much!

Ketjap manis is a very good idea - salty, sweet, sour and savoury at the same time - nice one.

You and Kavey are lovely x

MiMi - you know I am going to have to go back to the butcher and buy some more, just to try the ketjap manis idea, right? :)

It was really lovely, even if I did miss out the harissa pasta.