I got this recipe from my friend Mel, and, because it's me and I can't leave anything alone, I tweaked it.


I admit that it does seem like a bit of a faff initially, with all the different ingredients, but it is worth it. I keep all the stuff in stock now, so I can make it when I need it. It's a bit like that Vogel's stuff, not bad! I always have ground almonds, sesame seeds, nuts and flax seeds anyway, it was just the Carbolose and soy protein I needed to get.

1 packet of dried yeast (or 15g fresh) ( I used dried for the bread and fresh for the rolls)
1 cup wheat gluten
1/2 cup Carbalose 'flour' (pricey, but well worth having. Low Carb Megastore stocks it.)
1/2 cup soy protein (I use Holland and Barratt's own one, vanilla flavour, it tastes better)
1/3 cup ground flaxseed (I use whole and toast mine first)
1/3 cup ground almonds (not in the original recipe, but they add a 'crust')
1/3 cup chopped toasted shelled sunflower seeds
1 tsp sea salt - do not skimp on the salt

Put the warm water in a jug, add the sugar and the yeast and mix well. Leave to stand until foamy and emitting a 'beery' smell.

Put all the dry ingredients into a bowl. Mix well. I used a whisk to 'air' it.
Make a well in the centre, pour in the yeast mixture, add the egg.
Mix together until a dough forms. This happens quite quickly.
Knead for 5 minutes until it is smooth and cohesive. (I added 1 tbs olive oil when mine felt a bit too dry)
If it is too sticky, just sprinkle on a bit of Carbolose while you are kneading.
Form it into a loaf shape then pop it into a greased loaf tin.
Leave to rise. It will rise, but not as much as 'normal' bread. 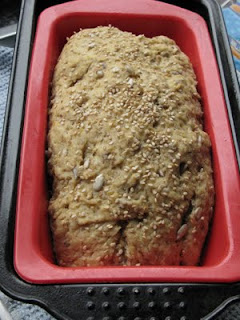 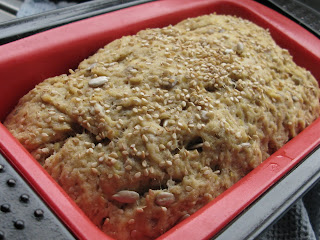 I bake mine at 200C (fan oven) or Gas 7 for about 40 minutes. If you divide it into two loaves then you bake both together for 25 minutes.

The bottom should sound hollow when tapped.

DO NOT OPEN THE OVEN TOO SOON. Give it at least 30 minutes before checking if baking one large loaf.

I've added in chopped toasted pecans to the mix, toasted sesame seeds, pumpkin seeds. There's all sorts you can do.

(I just checked and Carbolose has come down in price.
http://www.lowcarbmegastore.com/mixes-home-baking/white-flour-substitute-carbalose
It used to be £15. It really does last a long time though, as you only use a small amount.)

I'm going to slice the loaf and freeze it for work. Then that way I can just take out a slice when I want it.

The rolls had toasted pecan nuts, toasted sesame seeds and pumpkin seeds in them. 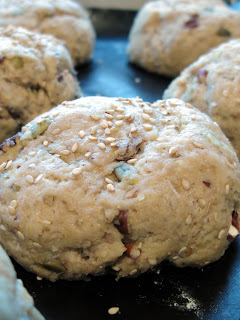 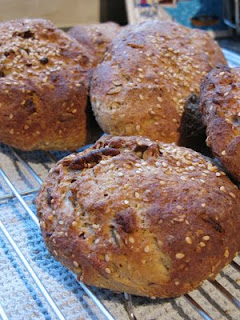 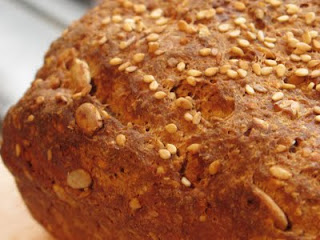 The lovely Food Urchin had extolled the virtues of his local Turkish restaurant so I, always eager to find a really good place to eat near where I live, asked for the details. High Road, Hornchurch is apparently the place to be for really good Turkish food.
Life got busy for a couple of weeks, but on the Monday following my birthday, Darling Husband said he was thinking of taking me out to dinner, and did I fancy trying the Turkish place Danny had suggested? Absolutely, said I, so off we went.
Hornchurch appears to close early when it comes to restaurants. We have an Ask, a Prezzo, a Zizzi…and a few other chains that I am weary of, all of whom were shutting or shuttered before 10pm. Danny says it far better here, and expresses the frustration at homogenisation in far more colourful terms.
http://foodurchin.blogspot.com/2011/05/this-was-supposed-to-be-restaurant.html
It’s only a small town, well I say town, possibly a hamlet rather than anything so grand as a town, maybe a suburb, so you don’t expect the choice to be grand but it is a bit samey. Admittedly we do have the terribly American Simply Blues, which used to be all exotic and exciting to us Brits, but now just seems to be trying a little bit too hard and I’m not sure that ‘succulent’ (their word) is the best way to describe their chicken dishes but it is decent food and not bad prices. A Carolina smoke pit it ain’t although I have to admit that this did amuse me on their website http://simplyblues.com/
Only the best quality Steer Beef is used, then aged and cooked to your choice.
All Steaks are Australian Free Range Beef.
We accept no liability for steaks cooked well done.

Anyway, where was I? Oh yes, Hornchurch on a drizzly Monday night. We found the place after a wrong turn, and it is so small that it’s hard to miss. It also used to be a French bistro, so that foxed me while we were looking out for it.
It is only a small place, with one side being mainly charcoal grill and a glass fronted counter, where the raw meat is displayed, forming an L shape with the grill. Wooden tables, quite close together, Turkish music being played and it looks like the typical seating add-on to a kebab shop.


The food is magnificent. Tasty and spiced, hot and crispy, unctuous and rich. The bread isn’t the bought in Turkish flat sesame seeded bread that you get in most places – not that there is anything wrong with that at all – this is a yeasted dough they make themselves and then cook directly on the grill as you watch. They will happily bring you as much as you want, and you will want more than the first basket. It turns up searingly hot off the grill, and the smell is fabulous. Cue me, bread, and a pile of olives and that’s me a happy girl.
Once we’d gotten over the OOOH BREAD bit, we had a great struggle in choosing our food. Umming and aahing and eventually we went for what we knew, because it’s almost a test. For a hot starter I chose Humus Et Kavurma, which is houmous topped with spiced lamb. Tex chose Arnavut Cigeri, sautéed lamb’s liver in butter, caramelised onions, spices, chilli & lemon juice.

Both were utterly gorgeous. The houmous was silky and smooth, and the lamb was minced, not cubed, which is how a lot of places serve it, and I’m not a fan of it that way. The meat goes cold too fast, and can get tough as it cools. This time though the meat was soft and beautifully spiced and seasoned, and oh my god so very moreish. Tex’s liver was perfect. Juicy, slightly crusted with spices and the mound of red onions underneath it were sweet, slightly caramelised but still crunchy and coated in spikes of ground sumac. As a person who does not really like liver, I could have eaten my way through that and asked for more. We had a small dish of Cacik as well – garlic, yoghurt and cucumber - because we love it. There is a case to be made here for not eating all of the tasty, tasty bread, because the mains are substantial.
Tex chose a mixed grill, so that we could get a taste of everything, and I chose an Iskende Kebab, which is cubes of grilled lamb, served on sliced pita, with a yoghurt and rich tomato sauce topping.

I think we can safely say here that we were bowled over by just how good the meat was. We have eaten in a lot of Turkish places, many in Northern Cyprus, and this was every bit as good, if not better. Everything was very well seasoned, and so very flavourful. There and then we decided that this was a place to come back to again and again. The meat was so tender, and if I were told that I could only ever eat chicken wings at this place I would be happy. Juicy meat, crispy skin and spices that didn’t overwhelm at all. Lamb chops cooked to utter crisp fatted perfection. More of the same please! The salad that came with it was fresh and crispy, with lots of red cabbage, gherkins and crunchy lettuce.
My Iskende was gorgeous. The yoghurt and the tomato sauce worked very well together, and the meat needed no knife to cut it, it just fell apart. I could have eaten the whole thing with a spoon. Next time, I am going for the chicken kebab, and then the quail, and then the wings and...and...and…
All in all, it’s definitely a place I would recommend to anyone, so thank you very much Danny for the tip!
All that, including drinks, came to £47. Okay, I know we don’t drink alcohol but even so I think that was a bargain and only a ten minute drive from home. Hurrah!