Dessert in a hurry!

Did you ever have one of those days where you started off with the greatest of intentions, and planned out what you were going to bake, only to oversleep and have to do it all in a rush? Well, that was my Saturday.

It was my own fault, I went out clubbing and we got to bed very late, er, early…okay it was about 3am.

I had planned to get up early and make a Parsnip Cake that I had seen on the wonderful Sabrina Ghayour’s blog.

She put it together for the Portobello Market ‘Roots Festival’ (Fri 27th & Sat 28th January) and, having tasted it, I can very much agree with her that it is indeed divine. However, I woke up at midday, and we still needed to go out and get all the ingredients, so that minor oops put paid to my fine cake baking idea. I will still be making it though, just at a more leisurely pace.

I needed a dessert that would be quick and very easy, using only ingredients that can be found at your average corner shop. So one jaunt later we came back with two Jamaican Ginger cakes, one long Madeira cake, a carton of ready made custard and a jar of fine shred Breakfast Marmalade. As we already had eggs in the fridge, I did what Simon calls my Ready Steady Cook impression and cue the assemblage!

“A conceptual variation on bread-and-butter pudding - alternating slices of madeira cake and Jamaican ginger cake, glued together with marmalade and then covered in a marmalade-and-custard mix, and then baked.”  ~ S Stacey, Jan 2012

Slice all the cakes up into 1/2 inch slices. Ginger cake is much easier to slice if it’s been in the fridge!

Feed some of the ends of the ginger cake to patient boyfriend. Eat other end yourself.

Empty the marmalade into a microwaveable jug or saucepan. Warm gently to loosen and stir in 2 tablespoons of whisky.

Sandwich the cake slices together with 3/4 of the marmalade mix and arrange them in a deep baking tray. I did alternate slices because it looked pretty. The madeira cake does tend to make it look like you have a pan full of Paddington Bear’s marmalade sandwiches.

Mix the custard with the rest of the whisky’d up marmalade, and beat in three medium eggs. Douse the cake slices liberally with this golden, creamy stickiness. 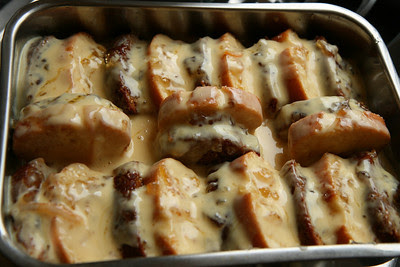 That is pretty much it as far as the prep goes! I baked it at around 170ºC in a fan oven for about 1/2 an hour. Just long enough to cook the eggs through and make it all bubbly. This deserves a bigger photo. 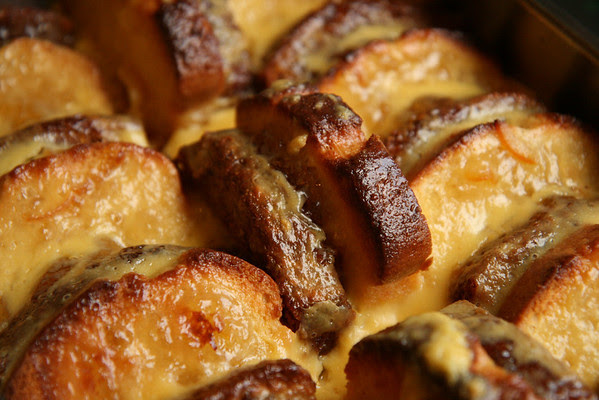 It was absolutely gorgeous, and very filling. This fed 6 of us at a dinner party later that day, and two of us again the next day, served cold with some ice cream.

Now obviously this is not an everyday pudding as it is certainly no lightweight but for a quick and luscious hit with no fuss? Perfect. You could vary it easily as well – lemon and vanilla cake with lemon curd or lime marmalade perhaps with limoncello, or chocolate and ginger cake with cherry jam and Kirsch – whatever you fancy! It is your dessert after all.

Posted by Lisa Cookwitch at 9:02 am

That's inspirational! I'd never have thought of doing that ... mind you, I'm only just dipping my toe into sweet cookery so maybe in time.

It really was one of those "What in the hell can I make out of ingredients I can get at the corner shop?" times.

A vanilla cake layered with mincemeat would be lovely at Christmas!