I am a great fan of digestive biscuits. I always have been, especially with a nice chunk of cheese to accompany them. I will admit to dunking them in tea as well, but not when they have cheese on them of course. That would just be a waste of cheese. And tea. Neither of which should ever be wasted.
Hang on. I haven’t had any tea today. Wait right here will you? I won’t be long.

I found this recipe a few weeks ago written up by Marianna over at Swirl and Scramble.

It was originally from Pascale Weeks, posted here:

I never got around to making it, because I usually get the Baking Urge early in the morning, and using the food processor to grind the oats is too loud a job to do at that time of day. So I kept forgetting about it. Until yesterday. It was the weekend, I was awake, husband was awake, I had all the ingredients and so off I went. For once I followed a recipe exactly.


They are utterly delicious. No they are not McVities, but they are a definite close runner up and they DUNK. I will say that I made them thicker than 3mm, because it was quite difficult to get the dough to spread out, but then that just makes for fewer but chunkier biscuits. You can roll it out under cling film, so I did that initially and then patted/pushed it out further by hand. It squishes together beautifully if there are any cracks, and it’s so easy to push the left over bits together so you can cut out some more.

It also occurs to me that if I add a bit more brown sugar, and only grind half the oats, they will essentially be HobNobs without the trans fats and corn syrup, or whatever it is they use to get you addicted these days. This does of course mean that I can make chocolate covered digestives and hobnobs, as the lovely Sarah from www.sarahbakes.co.uk did here:

I haven’t made Sarah’s recipe yet, but that’s only  because I don’t have any wheatgerm in the house. There will be a forthcoming experiment, never fear.

Anyway, to the recipe!

100 grams wholegrain flour
100 grams porridge oats
1 teaspoon baking powder (I will cut this to 1/2 tsp next time)
50 grams brown sugar
100 grams salted butter, softened (I used Lurpak with Sea Salt, because it’s what I had in the fridge and it needed using)
2 tablespoons milk


Put the oats in a food processor and grind them until they take on a powdery texture.

Put them in a bowl, and add in all the other dry ingredients.

Mix in the butter with your hands, or a pastry mixer, or a fork – oh well, however you want really -  until it becomes crumbly. I might try this in the food processor next time on a low speed.

Add the two tablespoons of milk. (I reckon Golden Syrup instead of milk would make them truly into HobNobs…)

Squish it all together into a big, flapjacky ball then wrap it in a plastic bag and out it in the fridge for 15 minutes. 20 would be okay too, but no longer else it goes rock hard.

Take it out of the fridge after the allotted time, and then roll it out on a lightly floured surface as much as you can, or just spread it out with your hands. It is quite sticky, but when you cut out the circles (I used a 6cm cutter) they do hold together. It’s quite a well behaved dough.

Place on a non stick baking tray and bake at 180C for 15 minutes. I put a non stick liner on the tray just in case and I set a timer. TOLD you I stuck to the recipe this time.

They are fabulous – and I really love the salt/sweet taste. If you want them sweeter, just add a little more sugar. 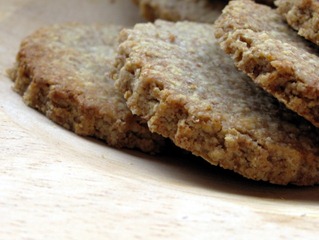 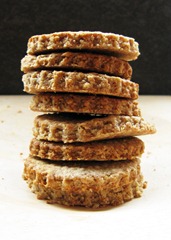 Posted by Lisa Cookwitch at 3:08 pm

Digestives! What a GOOD idea...

@Miss Whiplash - how I haven't eaten all of them already I do not know. I mean, I know I have the means to make another two batches at least here so it's not like I couldn't make more...