Last month I was awoken early by Miss Cat. By early I mean around 5am. Unable to go back to sleep I came downstairs and made a cup of tea and then logged on to Twitter to see what the rest of the world was up to.

There it was. A Tweet from Antonio Carluccio’s long suffering and unbelievably patient PA, Al.

It was a link to a series of lunch events hosted by the man himself.

“I won’t be able to afford that.” said I, slurping tea as I hesitantly clicked though the site to find the price.

I slurped some more tea, fussed the cat and then remembered my friend Lynne who had sadly missed out on the focaccia baking course that I had been to at Carluccio’s in Covent Garden, where The Maestro himself had turned up and chatted to us all. Another swift click later and a second ticket was bought.

We had planned to meet at Liverpool Street as that is easy for us both to get to. I found Lynne in the Camden Food Company, sadly at the receiving end of a very bad cup of coffee. Shame on you Camden Food Co!

We set off, deciding to take the bus as we had ages before we had to be in West London, and the bus doubled as a sight-seeing tour.

We started off on the No 11, but then got off at St Paul’s and waited for a No 23 as that would take us almost to the front door of the restaurant. 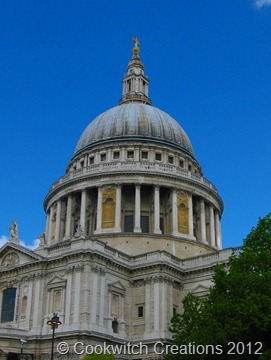 It was a relief when the bus turned up, because though it looks sunny it was really cold!

We had a nicely relaxed,  enjoyable journey, nattering all the way, looking out at parts of London we either don’t usually get to see, or that we hadn’t seen for years. Finally we got to Westbourne Terrace, and headed for Carluccio’s.

Al was outside on the phone, and she kindly stopped and chatted to us for a while before the lure of caffeine got too much for us.

Coffee was definitely the first order of the day and they did not disappoint. A delicious Latte Milano was in my grasp a few short minutes after we arrived. Oh how I miss working near a Carluccio’s caffe. Please, come to Holborn, we very badly need you!

Antonio arrived as we were drinking our coffee, and then after a few minutes they called us to table.

Grissini wrapped in very tasty prosciutto crudo were offered around, and prosecco too which I declined. We soon took our seats, and the first course arrived. I think I could probably just have eaten that for lunch and been happy. 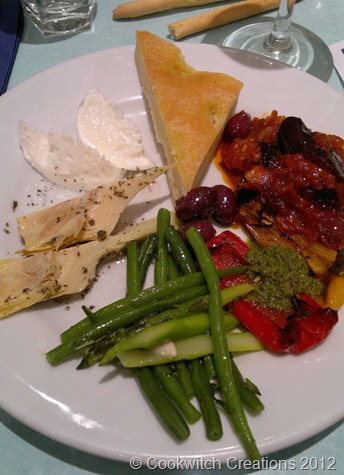 Lots more chatting ensued with our table mates – a lovely Cypriot lady called Georgia and her Italian husband, whose daughter works at Carluccio’s head office – and then oh my. The main course arrived in true Technicolor glory. 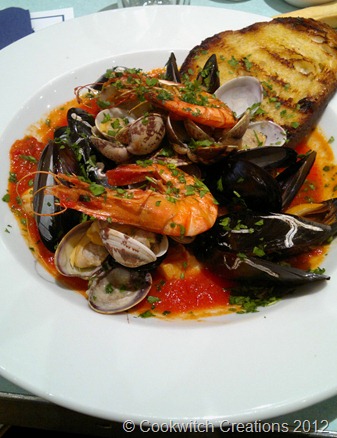 I swapped my mussels for some of Lynne’s clams, as I really do not like mussels. I keep trying, but still, no. I couldn’t finish it all, I was too full! Leaving Italian bread soaked in tomatoes and olive oil is not a thing I do lightly.

More wine had been drunk, and more talking happened. Antonio had been gradually working his way around the tables, spending a very generous amount of time sitting and talking to everybody in turn and telling jokes. He spoke to us about the bullying culture in some – NOT all – kitchens, and how he doesn’t believe in that being a useful part of training at all. There was discussion of all kinds of things, and we were very grateful indeed for his time. He truly makes you feel special when he talks to you.

He has a wonderful way with people, even though he must have been exhausted as he had flown in from Italy very early that morning and come straight to us.

I’m not sure how we managed this but we did. 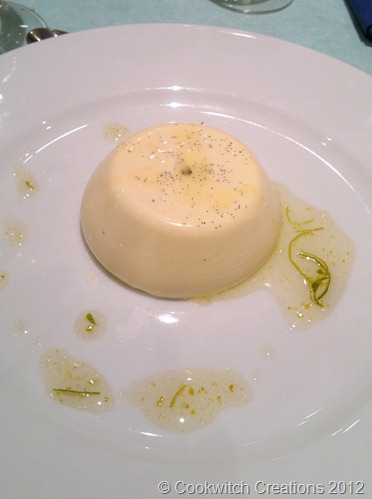 This had us scraping our plates with joy. It was utterly delightful, slightly more set at the base so it had more bite to it, then heading into smoothness at the top, offset by the chewy lime zest. A marvel. I could have eaten much more of that, if I had had the room.

Antonio very kindly spent a long time signing Two Greedy Italians Eat Italy books for us, but he wasn’t too hard done by, despite being very tired. He got lots of hugs from lovely young ladies, one of whom even sat on his lap to have a photo taken. Oh the pain of being famous.

I took some photos of both Georgia and Lynne sitting with Antonio while he signed their books, and here is one of him on his own. 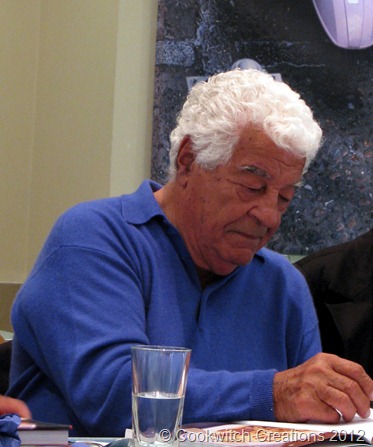 Grazie mille signore, for making a nice day even more special. I feel I should have brought you a birthday present, but what does one give you?

Huge thanks also go out to Al Naylor-Leyland, for making it all possible, and just being lovely.

Posted by Lisa Cookwitch at 8:44 pm

It was a fabulous day, I really enjoyed it all. Meeting the Man himself, eating delicious food, and spending a day of pleasure and leisure with you.

Life don't get better than this :)

Lynne, I am so glad you had fun. It really was a grand day out!

If another one comes up,please wve in my direction. I experienced the original Neal St restaurant when it was still very hands on, and loved it. Later, meah.

Mike - it was also on their events page. I'm signed up to the mailing list. :) Keep an eye on that for good stuff!