On Friday, a neighbour called round in the evening with a big box for us. I hadn’t ordered anything so was a bit puzzled until I saw Kelly Bronze Turkeys on the side. Ooh.

As a thank you for visiting the farm, Paul Kelly had gifted all of us bloggers with one of their fabulous turkeys. Here was mine, and it took me rather by surprise! Yes, those are the giblets in a bag. Believe me, they make FABULOUS stock. I simmered them with 2 shallots to make stock for a sauce and the smell pervaded the house. 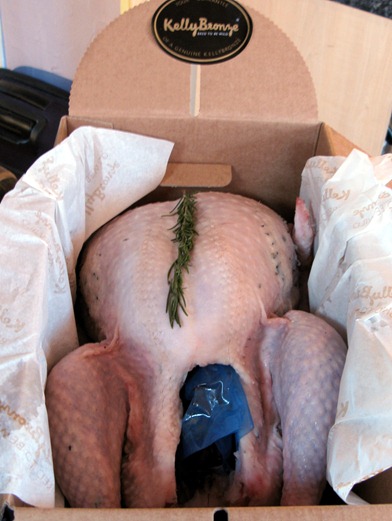 We had planned to have a Christmas with my in-laws weekend of the 15/16th, as I’m going to be away over the actual Christmas holiday, so we would have taken the turkey up to Suffolk, but pa-in-law came down with Norovirus so our visit got cancelled. Now we had the turkey, so what to do?

I had no room in the fridge or freezer, but luckily the weather cooperated and I popped the whole thing outside. It was so well packaged that I didn’t have to worry. The icepacks were still frozen the next morning, and stayed so until well into the afternoon. It was have been a very determined cat or fox to get into that lot of packaging.

Saturday night was going to be Roast Turkey Dinner night!

I read all the instructions, weighed the turkey on scales which then went EEEEEEEEE at me, so after a certain amount of jiggery pokery I guessed that it was around the 5 kilo mark and cooked it accordingly, making use of the meat thermometer that Kelly’s kindly send out with each turkey.

I have never seen such an amount of meat juices in  a turkey roasting tray before. I did not add any butter or oil. I just put some shallots and a lemon in the cavity, and salted the skin. It needed nothing else at all.

Cooked upside down initially, and then turned and finished off breast side up,  it retained all the moistness in the breast, which made it a pleasure to carve. I took the breast off in one whole piece, which made it much easier to carve up and portion out. It’s what I do when carving a roast chicken, but this took a bit more effort, the bird being that much bigger.

I can also happily attest to the fact that if the turkey has reached the temperature of 65ºC at the thickest part of the breast, it is done. It does not need to be cooked anymore, just taken out and left to relax, uncovered. No more danger of chalky, crumbly breast meat and don’t worry, it stays perfectly hot.

Served with olive oil roasted potatoes, green beans for Tex and steamed, buttered sprouts for me.

But what to do with all the leftover meat? Turkey and ham pie.

I had enough meat to make two pies, each one enough to feed four people, and I still have some dark meat left in the fridge to snack upon.

The pie was a great success, so here’s the recipe.

Put the flour and salt in the bowl and process for a few seconds to mix.

Cut the fat into pieces and add to the bowl.

Process on speed 2 for 5-10 seconds until the mixture resembles fine breadcrumbs.

Use the food pusher to measure the water.

With the machine running add the water through the tube and process until the dough just forms a ball.

Remove and knead lightly until smooth.

Wrap the pastry in cling film or foil, and chill for at least 30 minutes before using.

Divide the pastry in half and roll out. You need enough to line and top an 8” x 1” pie plate.

Line the pie plate, leaving a bit of overhang to allow for pastry shrinkage. I do not own any baking beans, so I just pricked the base all over with a fork so it didn’t puff up too much.

Bake at 180C for about 15 minutes then take it out of the oven to cool.

Turkey and Ham Filling (this is approximate, as I’m afraid I just threw it together.)

3 carrots, cut into small dice and cooked (I microwaved them for 8 minutes)

1 tsp mild mustard (use whatever mustard you like, but don’t use too strong a flavoured one or it will overpower the turkey.)

Fry the leek in butter until softened. Add the carrots, peas and meats, and mix well to combine.

Heat the stock, and melt the butter in it.

Add the mustard and milk and whisk to combine then whisk in the flour until no lumps remain. The sauce will thicken if you keep it on a low heat.

Pout the sauce over the meat and vegetables and mix well.

Put a couple of tablespoons of cranberry sauce into the bottom of the pastry case and spread the sauce around.

Pile as much of the meat mixture as you can into the pie base, brush the edges with milk or beaten egg and then cover with the second half of the pastry.

Press the lid onto the base and crimp to close. (I am very haphazard, but it sealed anyway. Just didn’t look very pretty!)

Brush the top with more beaten egg, cut a slit in it so that the steam can vent and bake at 180C until golden. 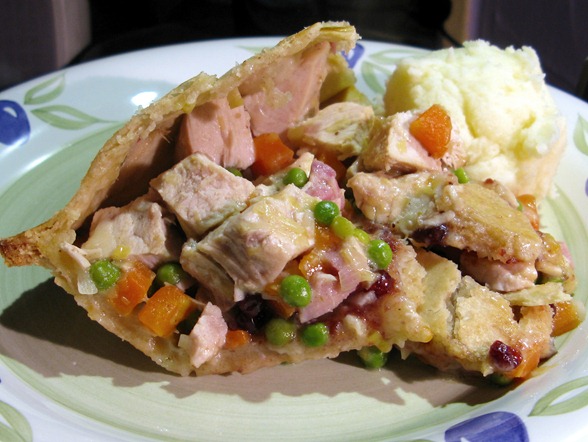 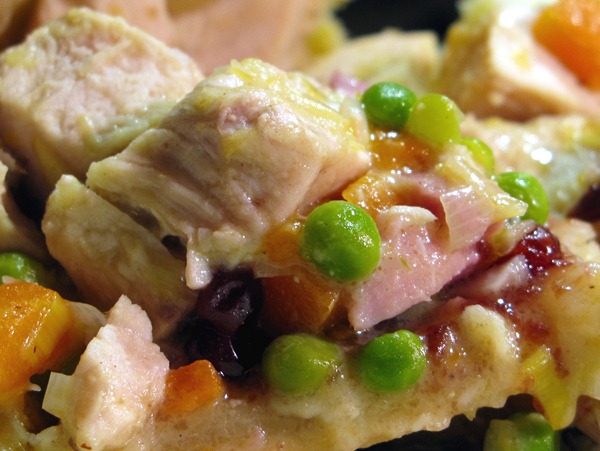 A friend is having goose this Christmas, and I think this pie recipe would work well with leftover goose too. I’d probably make the sauce a bit more zingy, as goose is so rich, perhaps adding in orange zest and a bit of redcurrant jelly.

Posted by Lisa Cookwitch at 7:52 am No comments:

A mini Christmas, all of my own.

It’s been a bit of a whirlwind of job applications and agency interviews recently, so much so that my brain has been distinctly frazzled when it comes to cooking, churning out the same old thing because it’s easy. My usuals are okay, but every so often I need a change.

I was on my way back from another agency when I stopped at the big Tesco by Liverpool Street station. This store used to be fabulous, stocking pretty much everything you could wish for, but then they redesigned the shop floor and, of course, that meant losing lines. Despite this, it’s still not a bad supermarket, even if they have crammed everything in so you feel rushed and claustrophobic, but I suppose at least that makes people get out fast.

I found fresh chestnuts, and decided on a whim to buy those, and some parsnips plus a Gressingham poussin. A nice solo dinner, with a Christmas edge. I bought Purple Sprouting Broccoli too, but that’s awaiting my attention in the fridge.

I got home and unpacked my haul, realising that I had enough parsnips in my £1 bag to make not only my dinner, but also a cake as well.

I set about grating the parsnips and putting this fabulous cake recipe from Sabrina to the test. (obviously cake before dinner right?)

It was easy to do, and I came out of it with only minor battle scars. Apparently my box grater is about due to be replaced, and the knuckle of my thumb bears testament to this. Ow.

My tweaks were to leave out the nuts, because I had none, cut down the amount of baking power to 1 level teaspoon and the bicarbonate of soda to 3/4 of a teaspoon, as I am quite sensitive to the taste of those, and to add 1 tsp mixed spice plus an additional tsp of Rose extract. Oh, and to use olive oil and Demerara sugar as that was all I had in. Sorry Sabrina! I fiddled again!

The smell of that cake as it bakes is lovely. The Demerara gives it a caramel note, and I added the mixed spice to make it more Christmassy, as I want to take it to my in-laws on Sunday for our early Christmas dinner, planned because I’m flying out to see my Mum in Cyprus for the holidays.

I can also say that having your electronic scales die on you as you carefully pour in the oil to a cake mix can leave one temporarily flustered because of course you cannot remember the digital reading before they died.

3/4 teaspoon of bicarbonate of soda

400g of parsnips, peeled and finely grated (this ended up at 300g grated weight)

Mix flour, raising agents and cinnamon in one bowl.

Whisk eggs, honey, oil, extracts and sugar in another bowl until properly amalgamated. (I had to guess the oil, as my scales died as I was pouring the oil in!)

Pour into the flour, add the grated parsnip and mix very well.

Pour into a springform cake tin that’s been lined with baking paper. (I oiled the paper.)

I can’t wait to try this. I can’t take a photo of the slice, as I won’t actually cut it open until Sunday, but here is Sabrina’s cake. 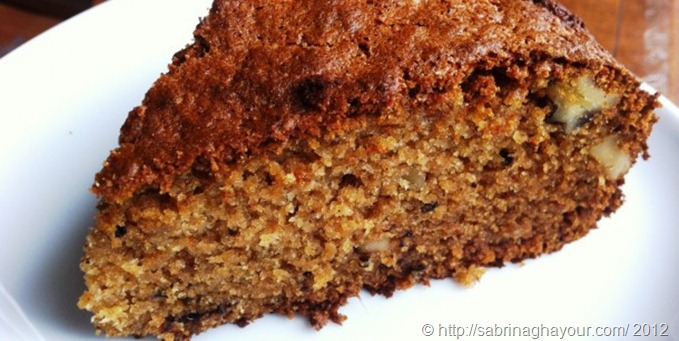 Next up was Actual Dinner.

I had roasted the chestnuts as per instructions found on the internet, but they turned out to be very dry, and almost impossible to remove from the shell. Luckily I found a tin of unsweetened chestnut puree in the cupboard, so my dreams of a parsnip and chestnut mash were fulfilled.

Take one cast iron/oven proof pan. Heat it slightly on the cooker, then pop in the poussin.

Douse with olive oil, pop a pat of butter on the top and a sprinkle of salt. Cook at 170C for about 45 minutes.

While that’s cooking, boil the peeled and chunked parsnips until very soft.

Add at least a tablespoon of butter, and a touch of olive oil, then blend. I used a stick blender and the motor overheated, which is why I added olive oil. I think I need a new stick blender, as mine is very old!

I served it right in the cast iron pan it was cooked in, because that way the mash got all the juices from the poussin as well. It’s a gorgeous mix! Steamed Brussels would go fabulously here as well, to cut the richness. 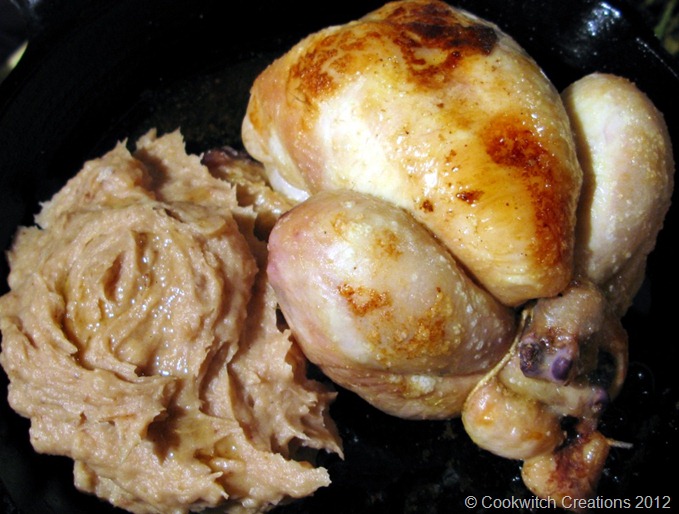 The mash would work very well let down with chicken or vegetable stock to make a smooth, silky soup, perhaps with some crispy smoked pancetta shards sprinkled on top.

As a quick post to make you hungry, this is what Spiced Sultana Soda Bread looks like, toasted.
Yes, that is real butter. 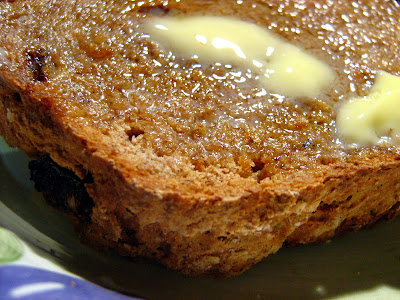 Posted by Lisa Cookwitch at 9:42 am No comments: