Last year, when I was working in Holborn, I went to the Hush Brasserie there,  and enjoyed it very much. Very nice food, decent pricing, efficient and smiling staff plus a nice, relaxed atmosphere. I was hoping, when I saw that a new branch was opening in St Paul’s, for the same and I was not at all disappointed.

Maybe it helped that it was a gloriously sunny evening, which reinforced the air of “a la Parisienne” about the restaurant. 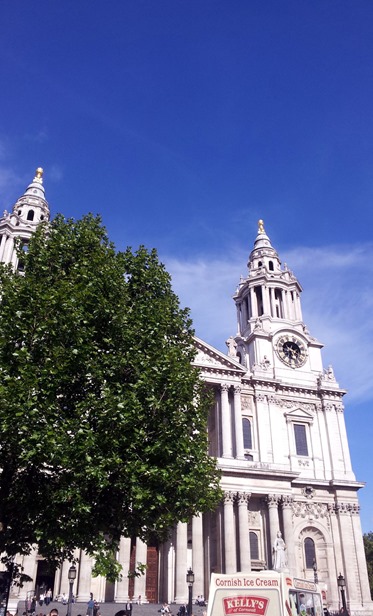 The decorative racks holding bread and croissants, and the marble topped tables, certainly helped with that.

The very professional staff attitudes proved what can be done with good service. Even though this was their opening week, everything just worked.

The staff members are attentive without being cloying, which can be the case at many other restaurants. My particular waitress, Marta, was very knowledgeable about the menu, and not afraid to state which dessert, or drink that she liked, but she didn’t push her choices onto anyone.

A starter of Yorkshire Pudding with pulled pork, apples and Calvados did catch my eye, as did grilled tiger prawns with chilli and garlic, but in the end, it was the Lemon Sole Fish Fingers that won that round.

My Rose Vanilla Iced tea arrived. I had been merrily Tweeting back and forth with their PR person, Lizzy, and discussing which iced tea we preferred, and we both like the Rose. One of my friends suggested it would be very nice with a slug of gin in it. I hate gin, so I will have to take their word for it.

I had a good slurp of the very refreshing tea, and then my starter arrived.

Beautifully crisp, not over-seasoned, with proper, home made tartare sauce and enough salad garnish to complement it, but not get in the way. It was also a decently sized serving of food, but small enough that it wasn’t intimidating, and didn’t make me worried that I would be too full for my main course. I already knew that I would be too full for dessert, because I always am.

Steak was the only way to go for my main. Ribeye was offered, and ribeye was what I wanted. I asked for it to be cooked medium rare, and it was, perfectly so. The meat had a good, deep flavour, though it was a little tough for ribeye. In a way, I think I actually preferred that to something that didn’t put up a bit of a fight. That’s what we have teeth for, yes? You know exactly what you are eating. The little serving of Lamb’s Lettuce with it was lightly but expertly dressed with a tangy vinaigrette, nicely cutting the richness of the steak.

Now I know people say “Oh but chips are the easiest thing to do! You can’t judge a restaurant on those.” but they are so very often NOT done properly. Nando’s I am looking right at you here. Soggy, that’s what yours are.

Hush serves frites. Golden sticks of nicely salted, potato goodness, the like of which you only seem to get in French restaurants. No, Belgo, you didn’t do them right either. Yours were soggy and tasted like cardboard. Côte Brasserie, across the road from Hush? Yes, you do them right every time.

Okay, so they came served in the ubiquitous small metal bucket, but it keeps them hot, and they stayed crunchy. They were reminiscent of frites eaten by the side of the road in the French Alps.

I do wish other restaurants would realise that a properly cooked chip is an absolute pleasure, and not just a cheap item to bulk out meals. I’m still looking at you, Belgo.

Condiments were offered, but not needed. The food didn’t need anything else added to it.

The couple at the table next to me were going the whole hog. Starters, wine, spritzers, mains and three desserts! They came in after me, and left before I did. I think they were very hungry. I also know they enjoyed their food, because they kept saying so. They were also very pleased to find out that they could have their burgers cooked to medium.

The thought of a Hush burger topped with pulled pork really did appeal to me, especially when I saw what theirs looked like when it turned up, but my ribeye won out in the end. It was my treat to me after a bit of a week (and yes, it was only Tuesday) and steak always feels like a treat. Maybe next time...

The dessert menu was waved away, albeit wistfully, but I definitely wanted a coffee. Again, perfect.

This is a restaurant where, as a woman dining on her own, I felt totally at ease. I would have no problem sitting there reading the papers in the morning, or dining along there at night. They have achieved just the right balance between attentiveness and leaving you to your own thoughts.

When the bill came, there was another pleasant surprise. 50% off because it was their opening week. I must have registered surprise, because the charming General Manager, Werner, came over to see if everything was okay. He told me the story of how the restaurant came about (originally started by Geoffrey Moore, Roger Moore’s son, in Mayfair. Then Jamie Barber, previously an entertainment lawyer, came on board and developed it further.)

Whilst we were talking, Jamie Barber himself also came over to say hello. I’ve been following him on Twitter since I first ate at Hush, so it was very nice to meet him in person! He asked Marta, my lovely waitress, to take a photo of us together. I look fat and happy, and Jamie looks very tanned and happy.

I wish them every success with this new venture, because it really is a very nice place to eat and relax. The free WiFi is also very helpful indeed, especially if you happen to be showing Facebook and Twitter what you are having for dinner.

I went to the one in Holborn to review and enjoyed it too. Lovely photo of you both at the end.

K - I remember reading it! The lobster roll did call to me but mmm steak...next time I will have something different.

Great review of what sounds like a lovely evening! I agree with you about chips/fries acting as an index of quality. It sounds daft but they're often a real treat as I don't make them at home so to enjoy a perfect chip is a delight. To ponder different starches, decide to go for chips and then find they're disappointing has spoiled many a nice meal. Now I sound chip obsessed and my tummy is rumbling.

Stephanie - I hear you about the chips. As I don't often eat them, when I do, I want them to be a proper treat, not just a starchy filler. Belgo's were really dreadful. Mind you, the rest of the meal wasn't that brilliant either so I won't be going back.