A Crisis of Confidence–and Breakfast

Yesterday I made Jack Monroe's recipe for Apple Crumble Granola. It was ok, but not great. Dry, with not much flavour. It certainly didn't inspire the OMG wow! reactions that I saw on her site. (I have NOTHING against Jack Monroe, by the way, just saying. I actually think she's ace.)

I was disappointed that it hadn't come out as I had wanted or expected it to.

It bugged me. A lot.

So not wishing to be defeated, today I rejigged the granola. Almond oil mixed in, more sugar, 1 extra teaspoon each of spices, and then a re-bake.

It was much, much better. Husband is  now eating a bowlful of it. Dry.

This granola recipe thing has made me realise that I have a tendency to underestimate my own cooking, and to assume that other people - the people who write (some of) the recipes I use - are much better at it than I am.

I look at my Foodie pals - successful food bloggers, cookery book writers, amazing chefs - and they wow me, but sometimes I feel like I'm just your less-than-average home cook.

Lots of my close friends have told me how amazing my cooking is and I try and hold on to that confidence yet, when a recipe fails, my brain defaults to "It must be me, not the recipe (especially when other people make it, and seem to have no problem with it)

But this time, I didn't give up and assume I was being rubbish. I followed my instincts, tweaked the recipe the way that felt right to me, and it worked.

Yes, I am surprised, but I shouldn't be. I've been cooking since I was a teenager, and talking about food for far longer. I really do know what I'm doing. I am an instinctive cook.

Sure, I don't know the technical terms for a lot of things, or the fancy ways with sauces or foams (ugh, foams, just give the damned sauce boat already), nor can I dice an onion at speed or ice a cake but I can feed you, and make you happy.

I can make a good meal out of what you have in your cupboards, even if there isn't much to work with. The Ready, Steady, Cook pantry was a banquet as far as I was concerned.

I can bone a leg of lamb and butterfly it out, even though it won't look tidy, but I'm not afraid to do it.

I just have to remember those things, when I'm feeling a little lost and inferior.

Melt the butter with the spices, then mix in the oil and the honey.

Put the oats, sugar and the apple in a bowl, mix well to coat the apple, then pour in the honey/oil/butter/spice mix.

Stir the oats so that everything has a good coating. Add one more tablespoon of oil if it looks too dry.

Spread out on a lined baking sheet and bake at 170C fan for around 30 to 40 minutes, turning every so often.

It will crisp up when it cools.

I rebaked it again a little today to make it more toasty. Next time I am adding sultanas as well. 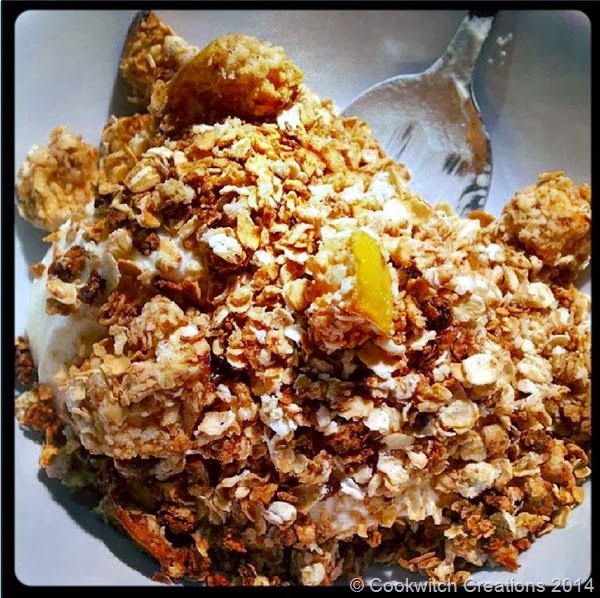 Good for you. Never feel you cant adapt a recipe to your tastes. A bit like use guides, i never fully read or use recipies, i just use them as inspiration and then muck about with the dish dependin on what ingredients i have ti hand. Dont get down, if something doesnt work out its not life or death, its only cooking!