No dough pizza. (Low carb high protein, NOT low fat at all.)

The cheese is essential to this, really. It holds the base together and gives it a more crust-like taste. You can add chopped fresh herbs to this, different meats, whatever you like. It’s good hot or cold.

1 chunk cooked gammon or ham, cubed (about a handful)

(no salt is needed, the cheeses take care of that.)

Sauté the peppers and spring onions together until very soft, then set aside to cool a little.

Beat eggs and grated halloumi together, mix in the cooked vegetables, oregano, parmesan and chunks of ham and pour it all into a well greased baking dish.

Bake at 170C fan for about 20 minutes until puffed and going golden.

Dot the top with smears of tomato puree, and top with sliced mozzarella, then grill to melt and brown the cheese.

WARNING: the egg + cheese mixture will form into concrete in the corners of a metal tin, so line it well. It stuck so fast to the tin, I had to soak it in boiling water with some of the oxi-action stain remover before it shifted. 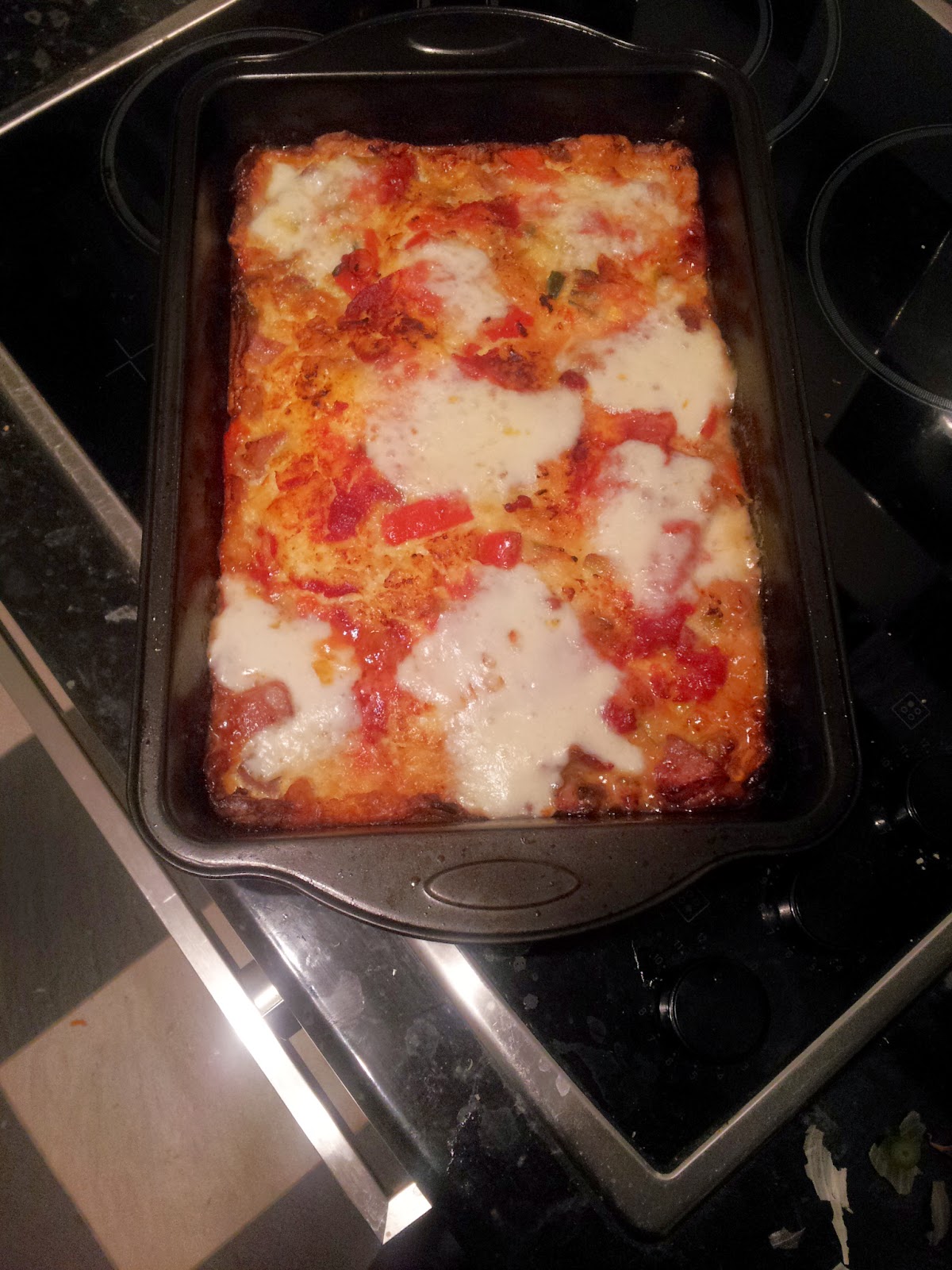 Another flourless cake, though NOT gluten free as semolina is made from durum wheat.
This is a bloody lovely cake.
125g softened butter
1/2 cup sugar
1 1/2 tbs finely grated orange or lemon rind*
2 eggs
2 tbs brandy (I used rum as that's what I had)
1 cup fine semolina
1 cup ground almonds
1 tsp baking power

Cream butter, sugar and lemon rind together until fluffy.
Add the eggs one at a time, beating after each addition.
Stir in the brandy.
Add semolina, almonds and baking powder then fold in to the butter mixture.
Put into an oiled tin (I used a silicone loaf tin)
Reduce oven to 180C, put the cake in and bake for 30-35 minutes until a skewer comes out clean.
Allow to cool and then poke holes all over it with a skewer.

Topping
Toast pistachios lightly in a dry pan.
Add enough clear honey to coat them all, then add the juice of 1/2 a lemon.
Heat gently to mix. Taste a bit of the syrup, if it is too sharp, add another spoon of honey.
Pour the warm syrup all over the cake.
Leave to soak in. 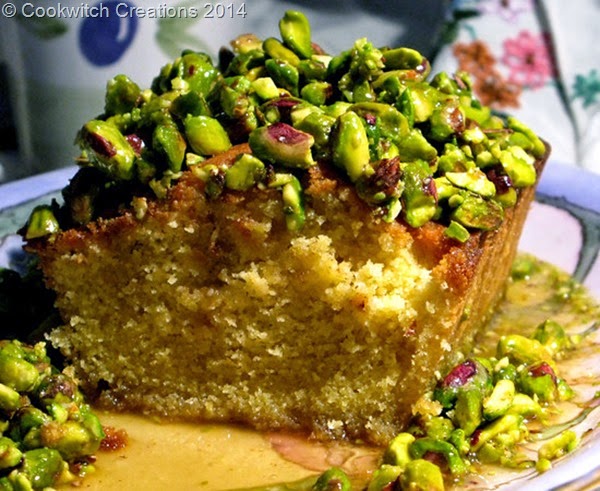 My father in law has Coeliac Disease, and so cake was always a bit of a hit and miss affair, until ma in law made these little cakes.

It’s such a versatile recipe. You can make small ones, one large sheet cake, or bake it in sandwich tins. I’ve used all kinds of chocolate and types of nuts, because it’s so easy to swap and change things around.

4 eggs separated (Nope, I don’t do this. It all gets mixed together.)

Chop the chocolate into pieces, add the butter and sugar and let the whole lot melt gently over a very low heat.

Let this cool for 5 minutes.

Then add the ground almonds and stir in well.

Beat the eggs in one at a time. (I added cinnamon extract here.)

Spoon into silicon muffin moulds or one large greased and lined tin.

Bake 30 minutes and let them cool in the moulds.

They can be crumbly, but no matter. Just eat them over a plate so you don’t lose any crumbs! 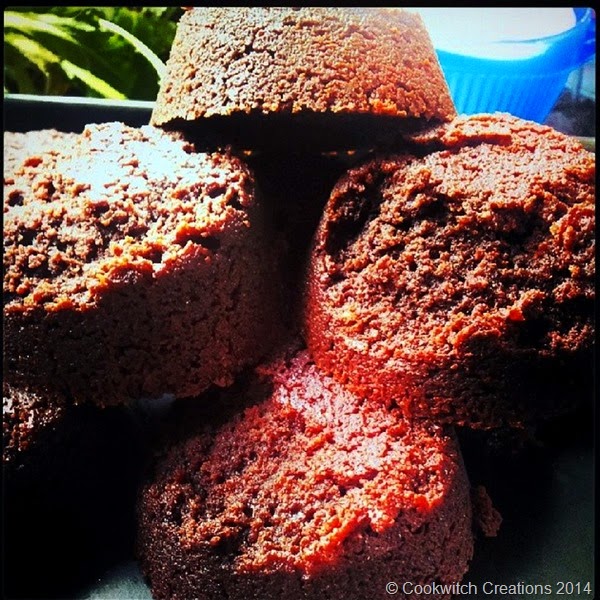 Posted by Lisa Cookwitch at 4:20 pm No comments:

I’ve had a hankering to make small, almondy cakes for a while now. I remembered reading that Chloe had made Friands, and they looked so fabulous, that I think they’ve been in my brain ever since, so when I happened across a recipe for Financiers, I had to make them. That’s a very good site, and I do love a nice video to check things against.

Making the browned butter was interesting. Mine didn’t get the ‘milk solids falling to the bottom’ thing that happened in the video at all. 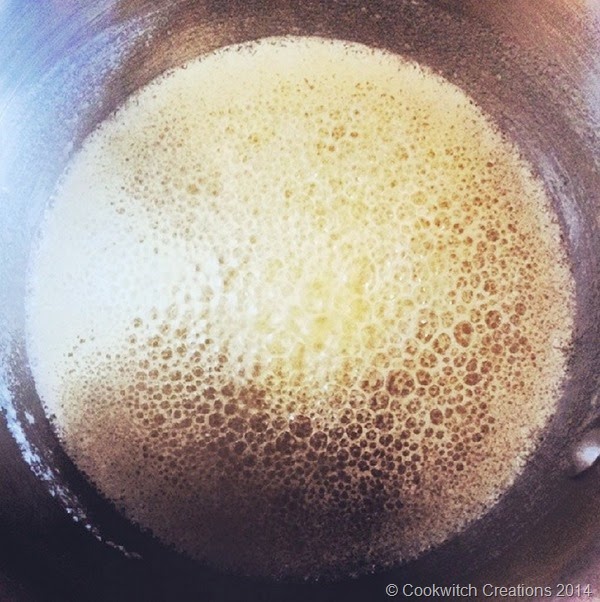 The liquid butter just got darker and darker. Maybe the difference between American and Irish (Kerrygold softer) butter? Who knows. It smelled fabulous though. So much so that I want to make a huge batch of it and use it in everything. It was richly buttery and smelled of caramel, like having a pan full of the taste of Werther’s.

Now. You see where is says to use 113g/half cup butter in the recipe? It isn’t. You use 113g/half a cup to make the browned butter, and use a THIRD of a cup in the recipe. I wondered why I didn’t have any left over! Still TASTY cakes.

Instructions taken from the website, my amendments in italics.

Preheat the oven to 400 degrees F (200 degrees C) with the oven rack in the centre of the oven. Place 12 rectangular or boat shaped tartlet moulds (each holds about 2 tablespoons of batter) on a baking sheet. (Can also use mini muffin cups. I used silicon muffin moulds.)

Place the butter in a small light coloured saucepan over medium heat. Once the butter has melted let it come to a boil, swirling the pan occasionally. As it boils you will notice that a foam will appear on the butter's surface. Continue to cook the butter until it looks clear and the milk solids have dropped to the bottom of the pan and have turned golden brown. Remove from heat and immediately pour through a cheesecloth-lined strainer. Let cool to room temperature. You will need 1/3 cup (80 ml) of brown butter. Use the leftover brown butter to butter the moulds (use a pastry brush). (I used the cheesecloth I had strained the butter though.)

In a large bowl whisk together the flour, ground almonds, confectioners sugar, and salt. Make a well in the centre and fold in the lightly beaten egg whites, vanilla, and the brown butter. (Here I also added 1 tsp almond extract.)

Fill each mould almost to the rim and bake for about 4 minutes (batter is set around the edges but still soft in the centre). Remove from the oven and gently place one or two fresh raspberries on top of each. Bake a further 5-7 minutes or until the Financiers have become golden brown around the edges and are springy to the touch. (I did not do this. No raspberries. I baked them for 12 minutes until done, in muffin trays that I half filled.)

Remove from oven and let cool on a wire rack. These are best eaten warm from the oven, but they can be covered and stored for a few days at room temperature or in the refrigerator.

I used the last little bit of leftover batter to fill madeleine moulds and baked for 5 minutes. They work very well! 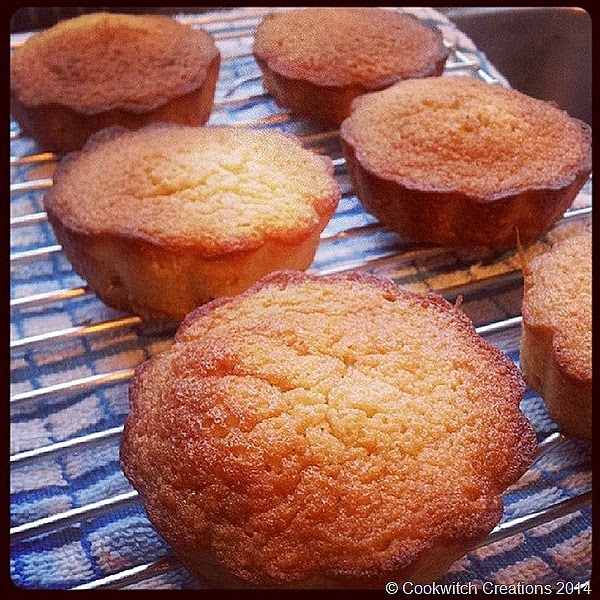 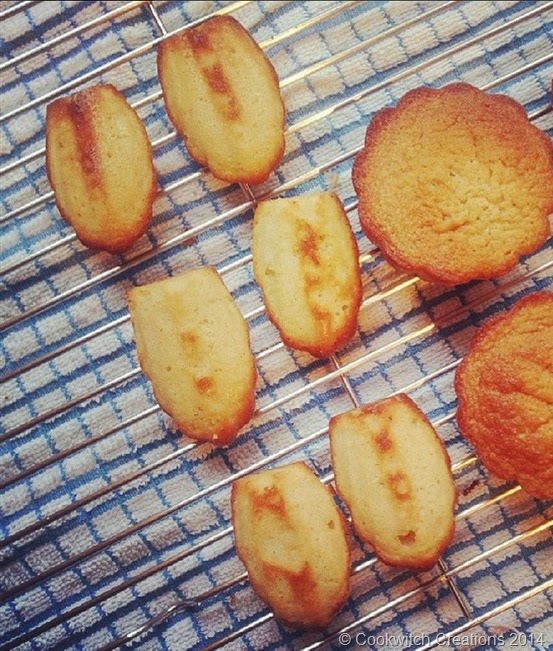 Posted by Lisa Cookwitch at 3:36 pm No comments: