Yes. I know. How can I have been alive for all of my considerable years and not made a Christmas Cake? To be honest, I'm not sure, but I hadn't. I have now, but let's just say it took me a long time to get around to it.

I've made cakes for Christmas, yes. But not one of those soak the fruit, cook for four hours, feed religiously and then decorate to within an inch of its life ones. My Nan was so good at hers, I had no need, and then nobody seemed to like it - I thought - and I can't have alcohol anyway so I just didn't bother.

To be honest, I didn't think I liked it either but then I learned of the marvellous Northern tradition of eating cheese with fruitcake, and I was sold.

Thank you James Herriot and past me who stayed up late, reading until after midnight on school nights.

This year, I had a long Christmas holiday off work, and was at home in the UK, so I got around to cooking/making a fair few things that I'd wanted to. Nigella's mini Christmas Puddinis were first, and they made short work of some shop bought Christmas pudding. (I still do not like traditional Christmas Pud. I'm sorry Delia.) I've made two batches of them so far, and everyone loved them. I used icing pens to decorate them, not chopped glacé fruit, as it was far easier.

In a fit of retro madness, I'd ordered some traffic light glacé cherries from Wilton's Wholefoods (I highly recommend them by the way) and also some whole glacé peel, because I really dislike the chopped mixed peel you get in the shops, which seems to be made up of tiny cubes of the bitterest things known to man. Look how beautiful this is! You could eat it as candy, it's that good. 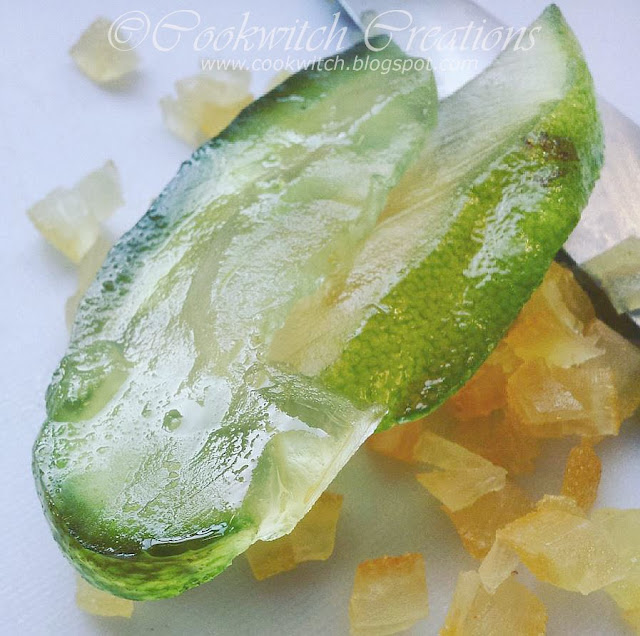 By way of discussions about various other things, I discovered that Husband does indeed like Christmas Cake. "The kind with marzipan and icing?!" so that decided me.
I knew I'd left it rather late, but then I figured that as I wasn't going to be feeding the cake, it would be fine. 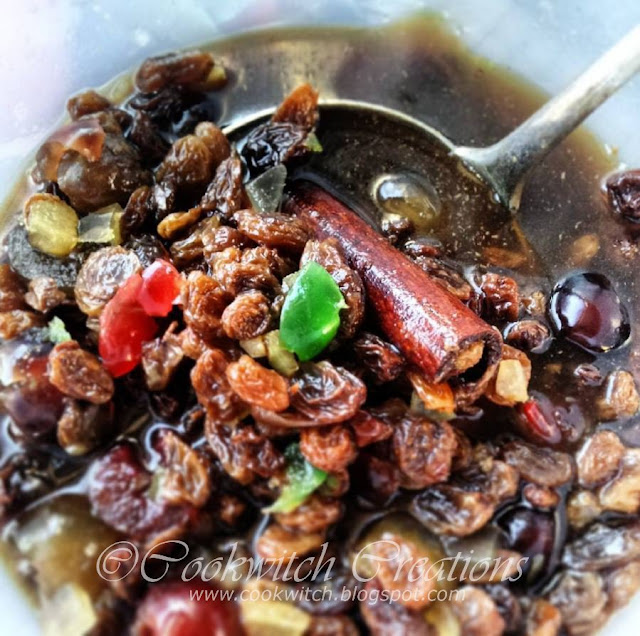 I left that all to absorb overnight. It hadn't completely absorbed by the next day, so I simmered it on a low heat until most of the liquid had gone, but I did need to drain the last bit off.

The cake recipe itself I got from The Pink Whisk. I'd faffed and floofled about this for ages, looking up recipes by Delia, then Mary Berry until I'd gotten myself all confused, so eventually I shook myself by the mental shoulders and said "IT'S JUST A CAKE WITH EXTRA FRUIT, GET ON WITH IT."

This post made everything clear, and simple. Oh it was like heaven smiled on me when I found it.

Taken from The Pink Whisk site:


Make sure your tin is deep sided (3″ deep), a shallow tin won’t do the trick here!

Be sure of your oven temperature, a long slow bake is what is called for to stop the cake from drying out too much and baking evenly. (I bought an oven thermometer, as my oven is...special.)

Position your cake on a shelf about 1/3rd of the way up from the base of the oven.

Keep an eye on the baking – start checking your cake for doneness from 2 and a half hours in.  Insert a skewer in the centre and it should come out clean when it’s completely cooked through.  If your oven temp is any different to 110c then it may be done sooner, but it may also take longer if your oven runs cool.  You need to employ your cake testing skills!

When it comes to feeding the baked cake, you can miss this out completely if you would rather, wrap the cake well as described and set aside to mature.  The flavours of the cake still intensify and the fruit in the cake will soften and be delicious.

If you would rather you can feed with apple juice or tea for a non-alcoholic cake.

If you don’t have a tin big enough to store your cake it will be fine wrapped well with baking paper and foil alone.

Cream together the butter and sugars until they’re light and fluffy.

Add the treacle and beat it in well.

Now for the eggs, add them one at a time working them into the creamed mixture before adding the next.

In goes the flour and mixed spice and a last mix up.

Now there’s the base for the cake.

Take your fruit and fish out the cinnamon stick.

And now a last stir up!  Cake mixture done! 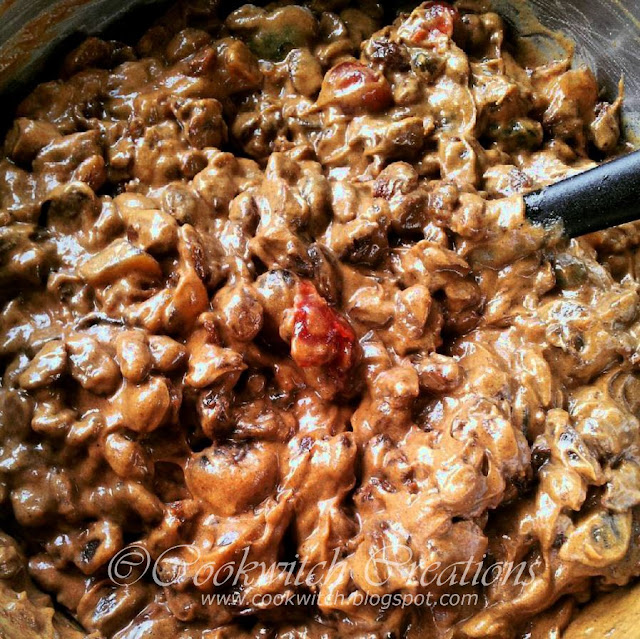 Time for the tins – line the base and the sides of a 8″ round, deep tin (at least 3″ deep”).  At this lower temp you don’t need to wrap around the outside of the tin with newspaper to protect the sides.

Fill with your cake mixture 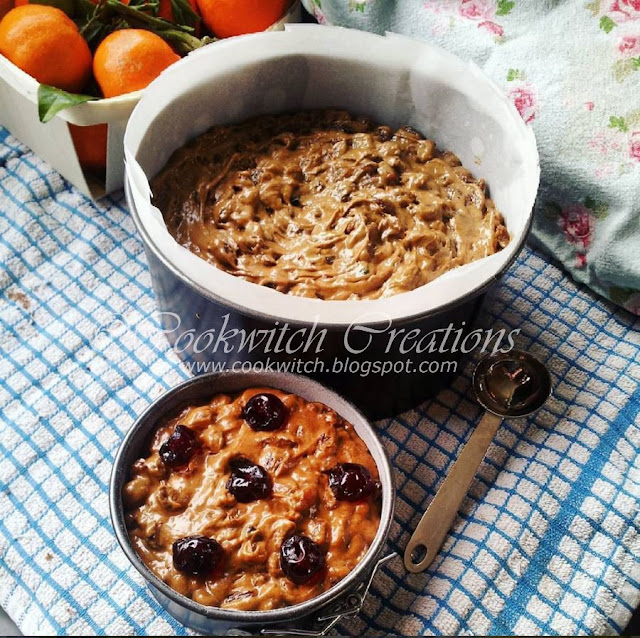 and bake it in the oven for 3hrs 45 minutes.

Remove from the oven and allow to cool completely in the tin.

You have no idea how accomplished I felt just because I managed to line one cake tin. The smaller one just got sprayed with cake release spray, and floured.

And here they are! Oh the smell as they were baking was lovely. Christmas filled my house. 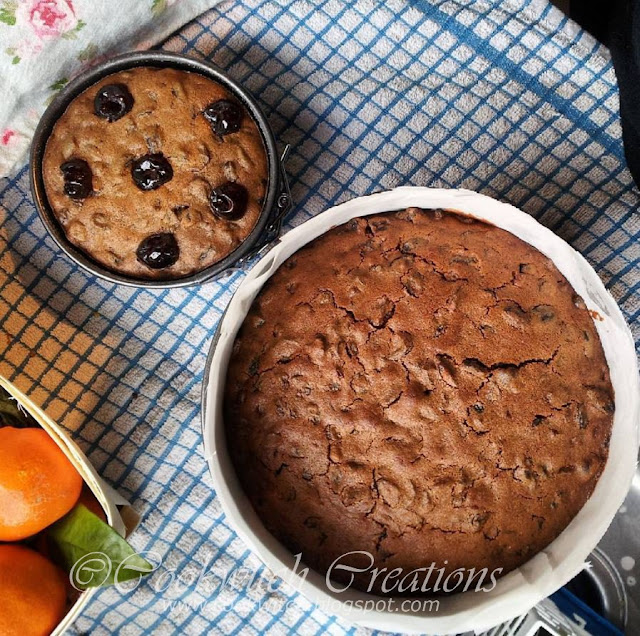 I like how the slow baking time meant that the cherries on the small cake stayed on top. Perfect! 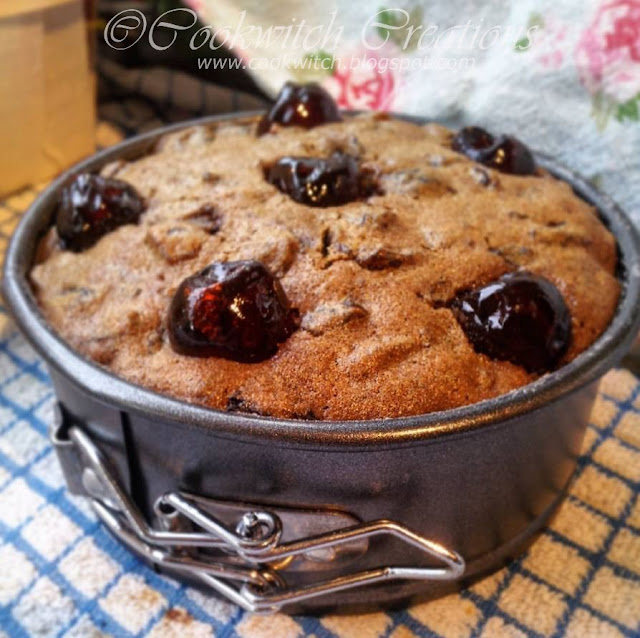 Once the large cake had completely cooled, Tex kneaded the icing and the marzipan for me, and rolled them out while I brushed the cake all over with lovely sticky ginger jam.

I went for the minimalist approach to decoration. 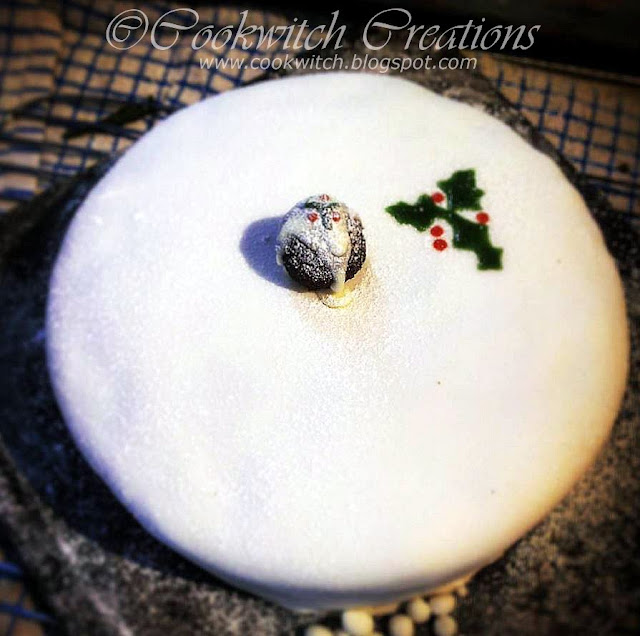 I do like how this one looks like it's in the moonlight. What? Yes. I am five. That there is a Puddini. 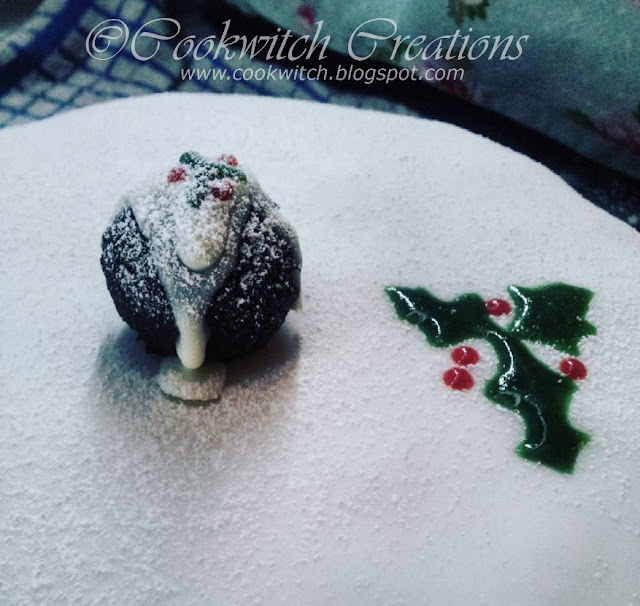 And joy! Retro glacé cherry shot! I baked this on the 24th, and we cut the cake on the 28th, having found stomach room. 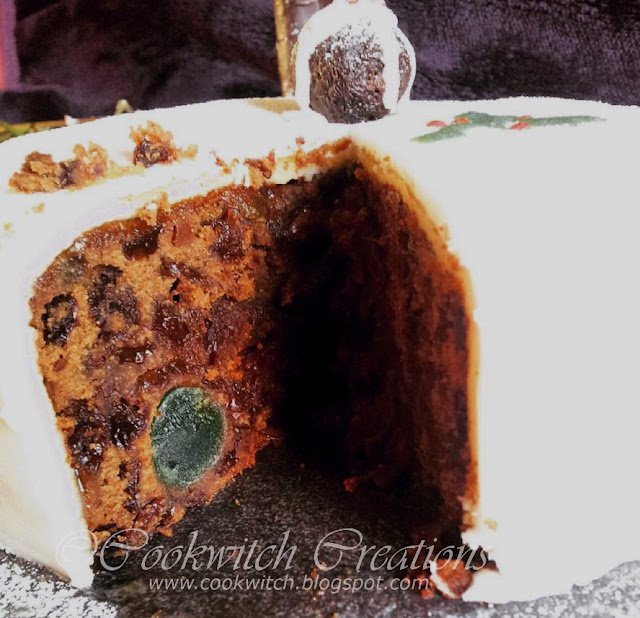 I finally got my wish, and had my own cake with cheese. It was perfect. The cheese is Wensleydale with Apple & Fig, and was just the thing to go with the rich cake. 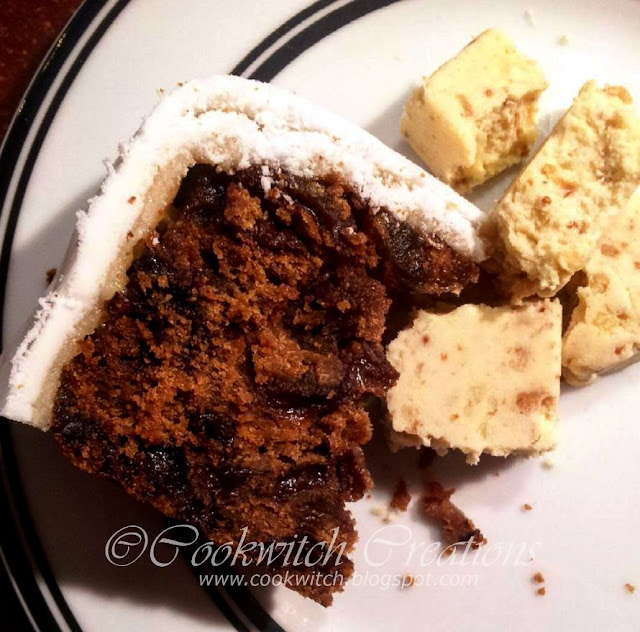 The cake has kept extremely well. I will say that the ginger jam has started to melt the marzipan, but everyone has liked that slightly more squidgy texture. We do still have some left, but not for too much longer! 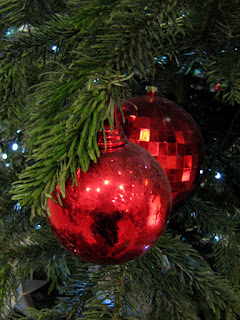 Posted by Lisa Cookwitch at 9:46 pm