I've been in dire need of comfort food lately, and comfort food for me usually involves chicken and rice. Last week I made a quick avgolemono soup (chicken pieces simmered in bought stock, eggs and lemons whisked in at the end, then pre cooked rice added) because I've had this cold/flu thing that's been hanging around the place bothering everyone for weeks. I'm on Day 19 here, and it still won't let go.

Chicken and rice is one of my favourite things. There's something about the coating of delicious fat you get from chicken thighs, as it glosses each grain of rice, and coats it in slick, warm, soothing slipperiness.

I fully understand why some people don't like this sensation but to me, it's liquid gold.  I prefer the dark meat, and the bits underneath the roast chicken, the ones that have been sitting in the herby, buttery fats, those are mine. Cook's perks.

I was tempted to do egg and lemon soup again tonight, but I wanted something more filling. I hadn't really eaten much this weekend, due to coughing, so I felt that a casserole would be a good idea, plus it would do me for dinner on Monday too.

Happily I found precooked chestnuts in the cupboard, and I knew I had a large, thick slice of pancetta in the fridge to use up, so that was that.

Cook the pancetta on a very low heat until all the fat has rendered, and the meat has crisped. This took a good half an hour. Don't be tempted to rush it, you want that flavour all to come out.

Once the meat is golden and crisped, take it out of the pan with a slotted spoon, and put to one side.

Put the chicken thighs skin side down into the pancetta fat. Cook them until the skin has browned all over, then turn them over and seal the other side.

Turn them back over so the skin is uppermost, pop the stock pot in the middle of them, add the chestnuts and the pancetta, then the water. The water came up to the middle of the chicken thighs.

I have to say, hands down, this is one of the nicest things I have made recently. Savoury, smoky, soothing and filling. Go me. I'm really glad I bought a pack of vacuum packed chestnuts on a whim, months back! 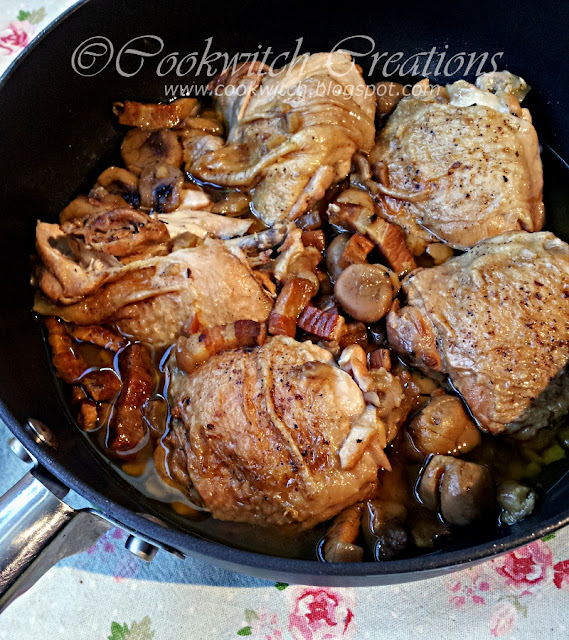 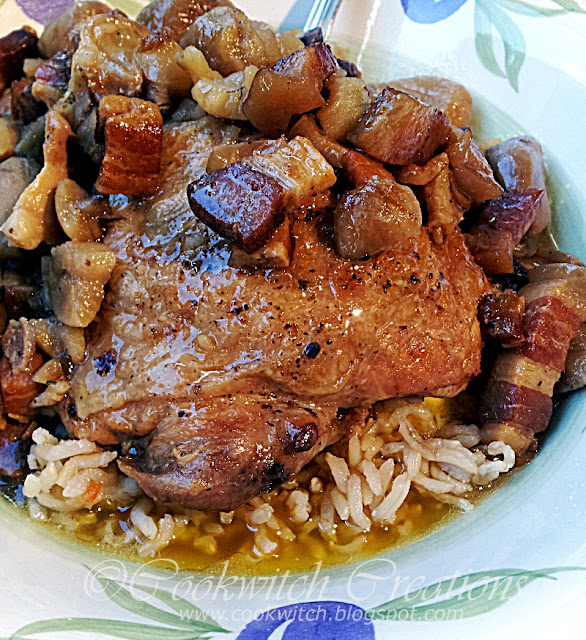 Posted by Lisa Cookwitch at 10:23 pm No comments:

I will now admit to never having actually eaten a blood orange, so after everyone was going on about them, I thought I should. Once I'd seen this recipe by Kellie at Food to Glow, then I really knew I should.

I usually pootle around Borough Market on a Thursday morning, on my way to work. I love watching it all set up, plus going at that time means that I don't have to contend with photo taking, NON BUYING tourists. (Seriously, if I spot you , Non Buying People, I will CALL YOU OUT. It's a working market, not your bloody playpen, and those stall holders need to make a living. And no asking actual shoppers to move out of your way, just so you can get a shot! *ahem*)

After a lovely bacon sandwich at Maria's, it was off to Ted's Veg. The majority of their produce is home grown, and extremely reasonable in price. You might recall my excitement at their purple brussel sprouts, and sprout flowers, if you follow me on Instagram.

Blood oranges were procured (along with purple sprouting broccoli and a jar of amazing set honey) and then put aside for the weekend. 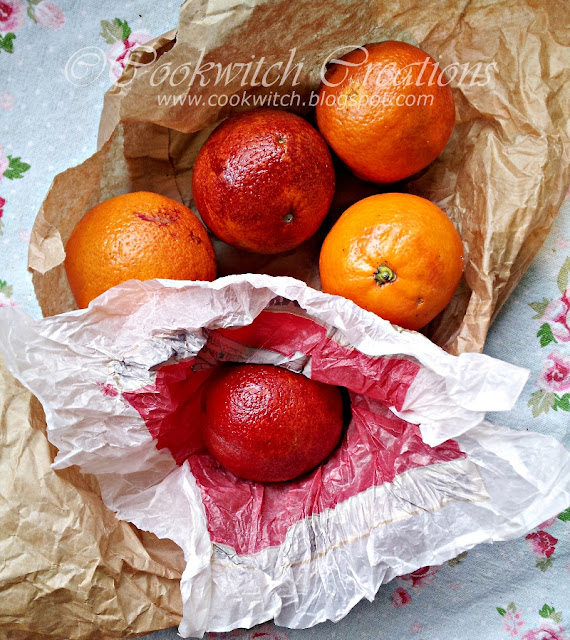 The weekend arrived, and it found my cupboard bare of polenta, with me in a fit of Not Going Out Again Ever after a very intense week, so I thought about an almond cake instead, as I have always got lots of ground almonds.

You know I said I always have lots of ground almonds? This time, I didn't. I had 100g exactly. I did have a kilo of extra fine ground almond flour, but that takes a lot of adjusting to, and I really didn't want to muck around much when baking something that was meant to be for tea that same day. I found some toasted pistachios in the cupboard, so I ground them in my ancient spice grinder and used those.

Bring the two oranges to the boil in some plain water, and then simmer for 1 hour. Take the oranges out but reserve the liquid.

Leave the fruit to cool, take off the green stem end. You're meant to dig out the pips, but as everything is being whizzed in the food processor you don't really need to, but do so if it makes you feel better.

The original recipe called for separate bowls of wet and dry, and folding in the puree to the almonds, but I did it my way because I'm me.

Whizz the fruit up in the food processor until it's a fine pulp.

Whisk the sugar and eggs together until well mixed and lighter in colour then add them to the food processor.

Add the ground almonds, ground pistachios, extracts and baking powder to the food processor bowl and whizz the whole lot for at least 5 minutes.

At this point you can just pour the whole lot into a loaf tin and bake it. but I wanted to add some decoration.

Slice the orange into rounds, about 5mm thick. Too thin and they will tear.

Ok I admit it, I was utterly entranced by these orange shelled harbingers of ruby treasure. I might have needed to step away from the chopping board for a bit because I kept staring at them. 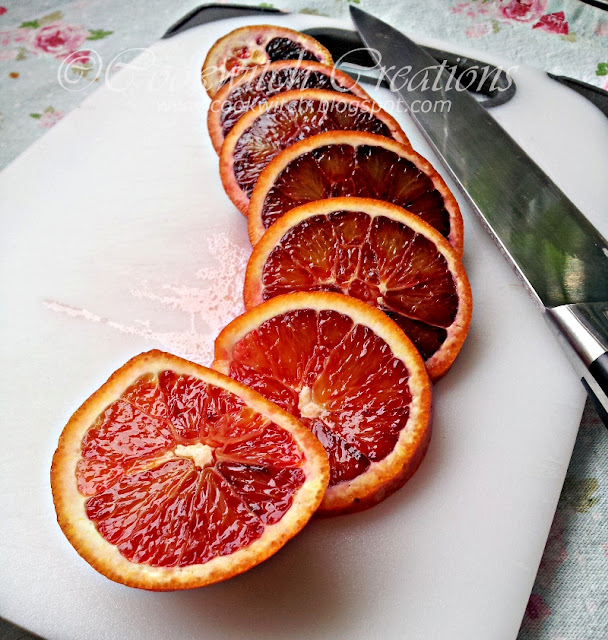 into a heavy pan, and heat to dissolve the sugar. Once the sugar has dissolved, add the orange slices. Bring to the boil, then turn down to a simmer, and simmer on low for 1 hour, making sure the slices are submerged every so often.

Take the slices out, and drain them on a rack. They will shortly become the stickiest thing known to man, and adhere to knife blades, fingers, non stick foil and you. They are also delicious. I tasted a bit of the syrup they were cooked in and actually did a little shimmy it was so good. 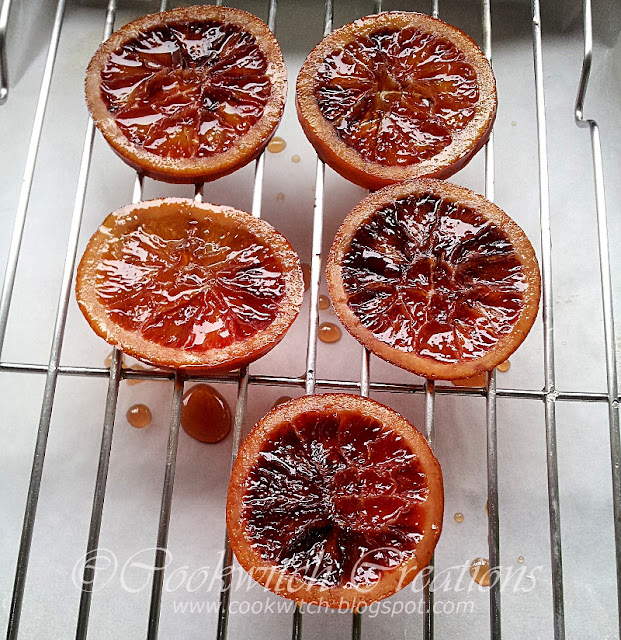 When cool, cut in half, detach them from the knife blade, unstick them from your fingers again *sigh* and lay some along the bottom of your loaf pan. (I used a silicone mould to line my loaf tin, and sprayed that mould with non stick baking spray. Yes, the slices still stuck to it.)

Pour the cake mix in until about 10mm below the top. 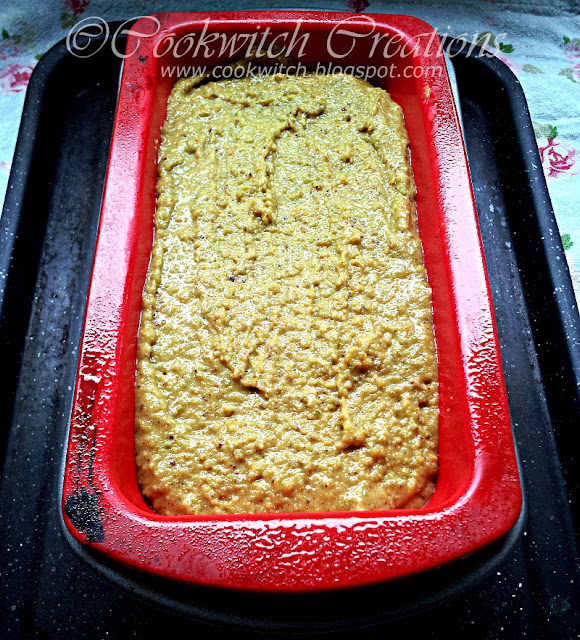 Turn the cake out, bottom side up.

Grin like a loon because the orange slices are still there. 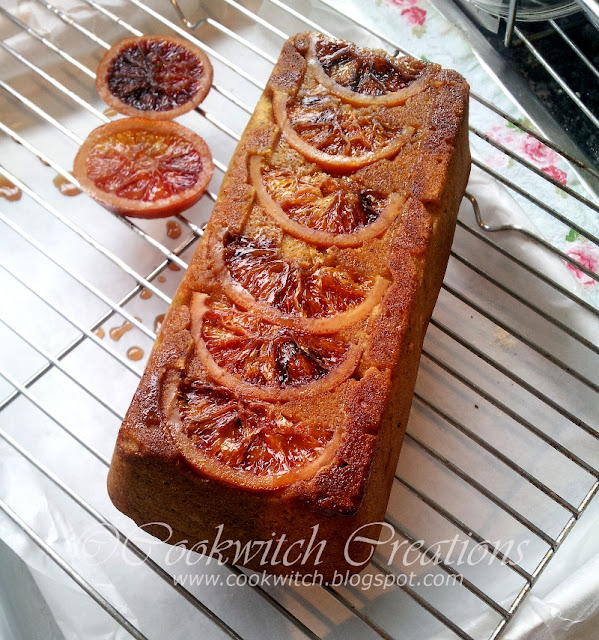 It's a dense cake, which you would expect given the amount of nuts in it, and it's as rich as if you have soaked it in syrup, but I didn't. It also slices like a dream. 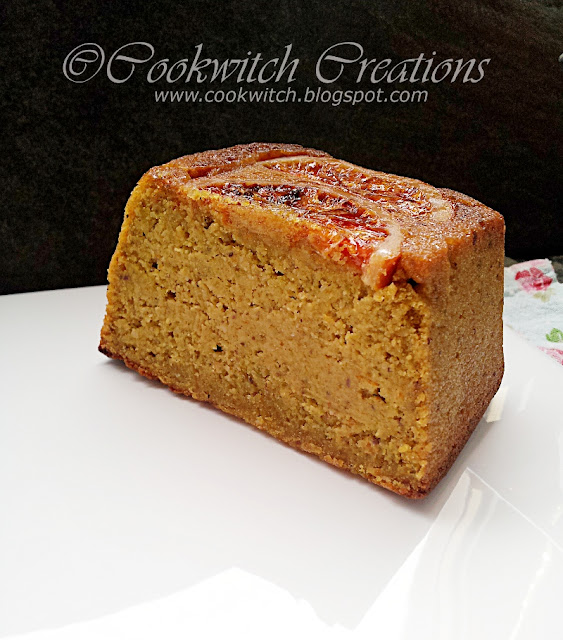 While that was cooling, I decided to make some more cakes, little ones this time. I toyed with traditional fairy cakes, but then I decanted a jar of Ras El Hanout into my spice box, and its warming, musky smell hit me, saying "Spiced cakes!" After all, why not use it in a cake? This time I decided to use the extra fine almond flour, and to tweak the 'weigh the eggs, then use same weight of sugar, butter and flour' method a bit.

2 eggs (132g in weight)
132g soft salted butter
100g Demerara sugar (I could have got away with using even less, I think.)
70g extra fine almond flour (the extra fine is very absorbent)
1 tsp ras el hanout powder
1 tsp vanilla extract
2 tsp milk to thin the mix down a bit
ground pistachios for the top

Whisk the butter and sugar together until fluffy, then beat in the eggs, the extract and the spice.

2 tsp of milk got added here as the mixture wasn't really of 'dropping' consistency.

A rounded dessertspoon of the mix got dropped into silicone muffin moulds that I'd sprayed with non stick baking spray, and I sprinkled some of my ground pistachios on top.

At 15 minutes they still looked a little pale, so I left them for another 5, and that gave them nice golden edges.

They're quite delicate, so I tipped them out of the moulds without touching them, and left them to cool upside down for a while. 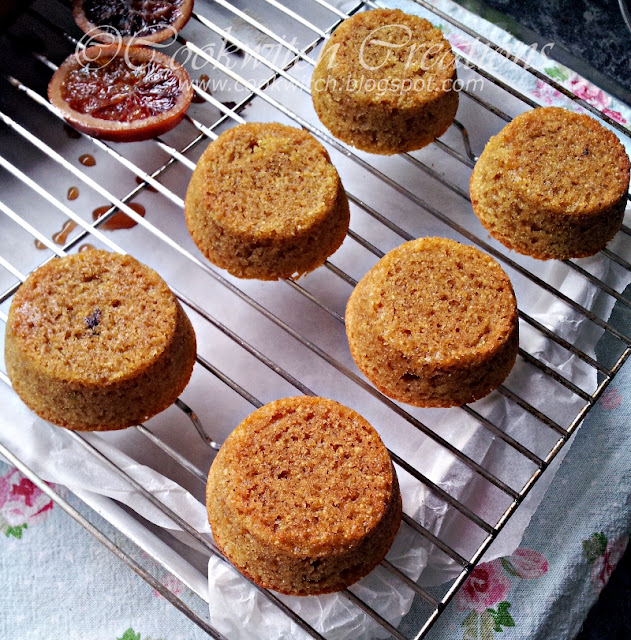 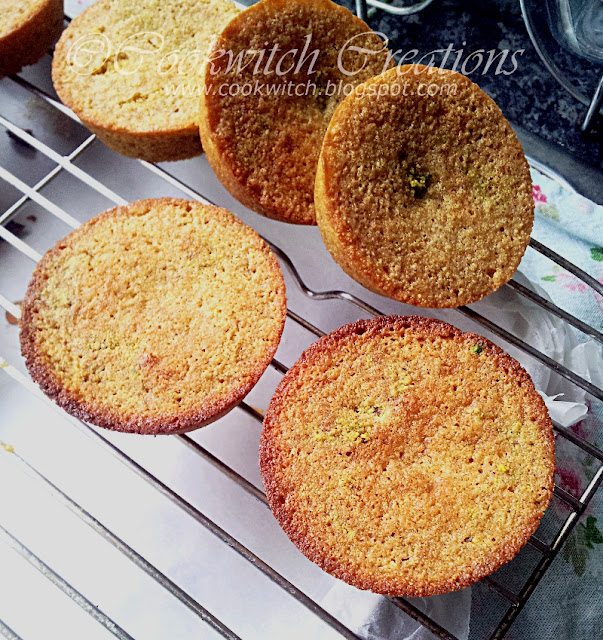 They have a very tender crumb, and none of the slightly gritty texture that almond cakes can have, which I do rather like, but I know some don't. The spice is there, just in the background, so perhaps a touch more could have been added, but not too much. 1/2 a teaspoon maybe. I think they would be nice with orange zest, or orange flower water added too.

Both of these recipes are definitely ones to make again.

Posted by Lisa Cookwitch at 12:34 am No comments: