This is very definitely called winging it.

I had meant to make a rhubarb and strawberry compote, and bake an upside down cake. 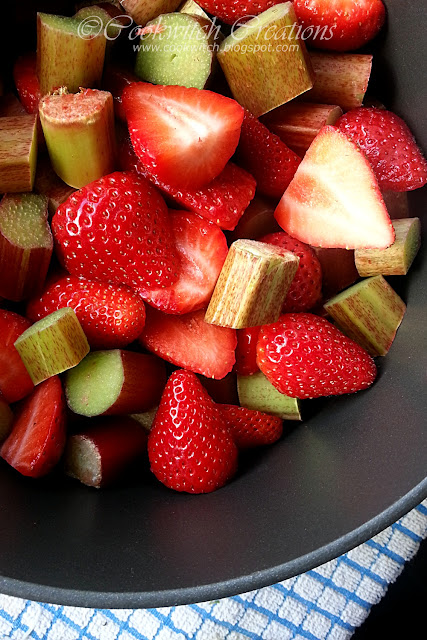 Said compote turned into more of a sauce.

Hmm, says I. My mantra is 'if it goes wrong, call it by another name and pretend you meant it' so it turned into a fruit sauce topped with what was meant to be a plain sponge.

I had run out of light sugar. It's actually a dark brown sugar and ginger sponge instead.

1lb rhubarb chopped (I suspect I chopped mine too small.)
1lb strawberries, hulled and cut in half
3/4 cup of golden caster sugar (you can see why I ran out now can't you?)
1 tbs lemon juice
1 tsp vanilla extract
1/2 tsp cinnamon extract (optional)

Mix the fruit with the sugar, add the lemon juice, then put on to simmer.
Once all the sugar has dissolved, and the fruit has let out its liquid, turn the heat up slightly, add the extracts and let it cook until the fruit has cooked down.

Sprinkle the crumbs over the base of a large cake tin or casserole dish. DO NOT USE A LOOSE BOTTOMED TIN because there will be leakage.
Pour in your warmed jam or compote or even drained tinned fruit if you like.
Whisk the sugars and the butter until fluffy and well mixed in. If there are lumps of sugar, don’t worry, they’ll just be added texture and pockets of caramel.
Beat in the eggs, one at a time. Do not worry if the mix curdles.
Whisk in the ground ginger and the vanilla.
Then whisk in the flour.
Use a spatula to scrape the edges down, and continue to mix.
Add 5 tbs milk, and fold that in.
Dollop on top of the jam/compote/fruit
Bake for 35-40 minutes until risen and golden brown.
You may need to bake it for longer, mine ended up needing 50 minutes. 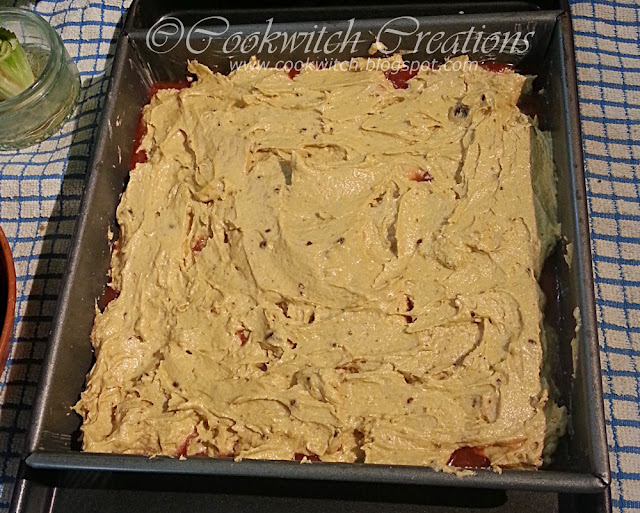 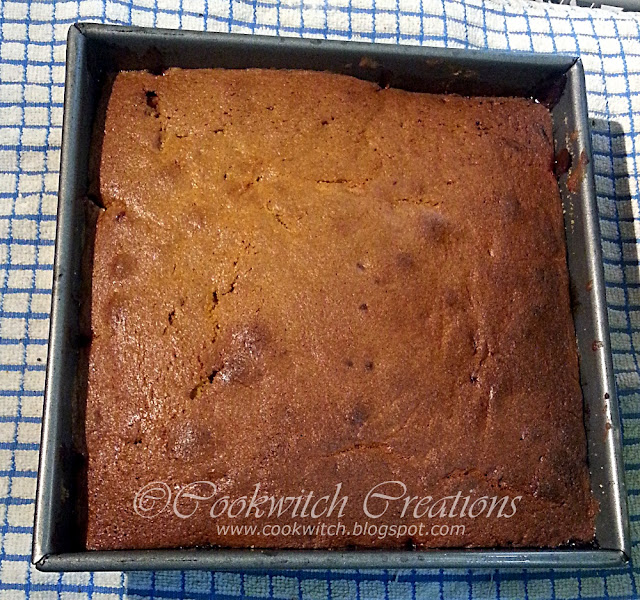 Now to see if it survives the journey to Nottingham.
Posted by Lisa Cookwitch at 12:03 am 1 comment:

Lamb is definitely one of my most favourite meats, so when I heard about the lamb recipe challenge (link here: http://www.tastyeasylamb.co.uk/Follow-the-Flock/Lamb-Recipe-Challenge ) I was sold. Winning something is nice, of course, everybody likes the chance to win something, but I admit that was more motivated about having a chance to experiment with lamb, which I always enjoy doing.

I love everything about lamb, from the sweet meat, the glistening fat, and the crisped skin to the aroma that fills the house when you roast it, or the garden when you barbecue it.

It pairs well with so many things, such as the sweetness of fruit in tagines, the zesty crunch of chillies and spring salads, the soft, gentle creaminess of coconut in a curry perhaps or just plunged into plain old soothing yoghurt, jazzed up with some mint and cucumber. I’ve used it in mediaeval mincemeat too, and it makes for a soft, rich taste to the spiced mixture.

I’ve used all kinds of cuts over the years. Shoulder marinated in white wine, lemon and olive oil and slow cooked for 12 hours; boned out and butterflied leg jazzed up with Ras el Hanout and herbs; belly stuffed with cinnamon, onions and dates; chops covered in cinnamon and cumin paste and chargrilled; the liver spiced up and quick fried with onions and parsley…I’ll take it any way I can get it.

This is a fairly easy dish, quick to put together so not bad for after work, and it's even faster if you have a food processor. I used red pointed peppers, as they are thin skinned, and cook faster. You can, of course, use red bell peppers, but they will need longer cooking, so you might want to mix the lamb with some part cooked rice and extra herbs so that it doesn't dry out. 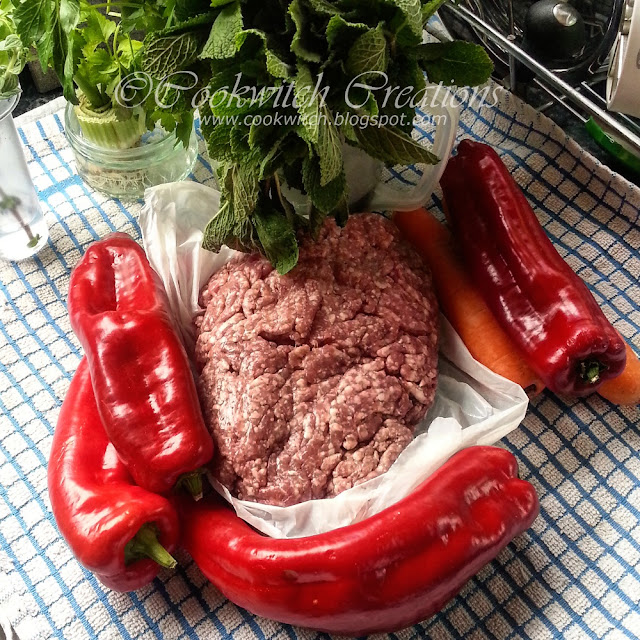 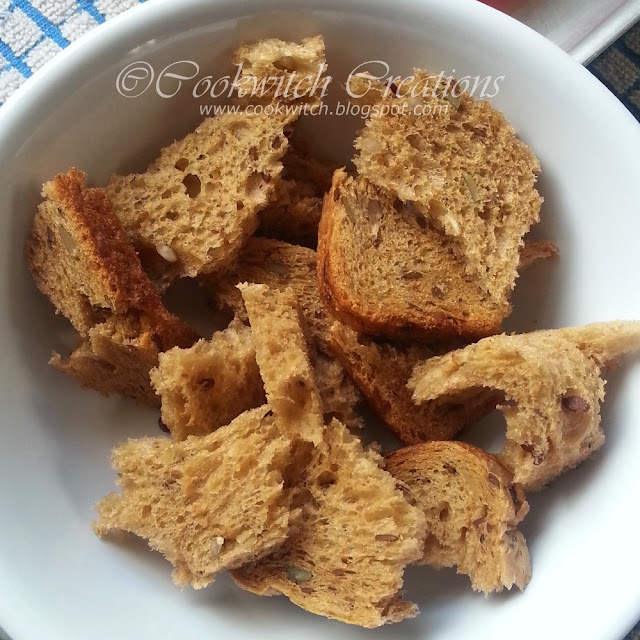 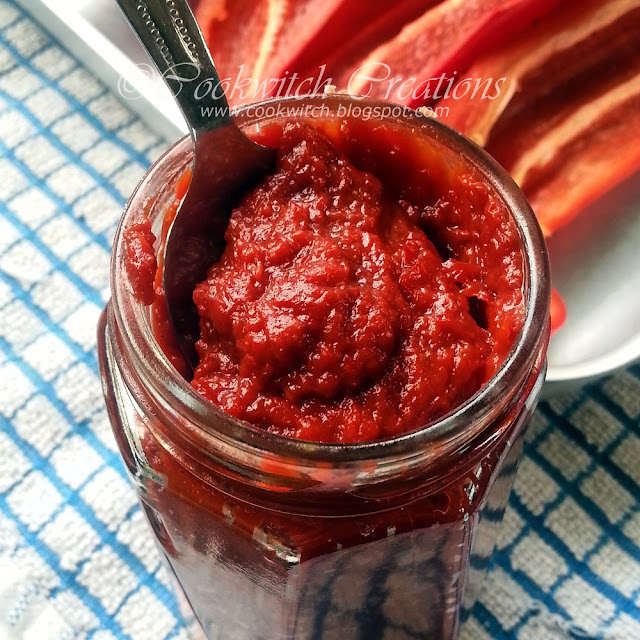 
You can chop all the herbs and onions by hand, though they won’t be as fine as if you do it in the food processor. Make sure your knife is really sharp, as parsley can be a right pain to chop, I have no idea why. If you do do things by hand, work the spices and herbs into the meat well, it should turn into more of a cohesive paste. That makes it easier to push into the peppers. Don’t worry about overfilling as the meat will shrink back as it cooks. I used the food processor for mine, as my hands ache after too much knife work.

Pulse the herbs, onions and the garlic together until they are very fine.
Add in the lamb, carrots, cumin, cinnamon, salt, red pepper paste and pul biber/cayenne.
Blend well until they make a fine paste. You could add in some currants and pine nuts at this stage if you wanted to, or grated courgette, then pulse again. It’s a good way of adding extra vegetables to a family dish. 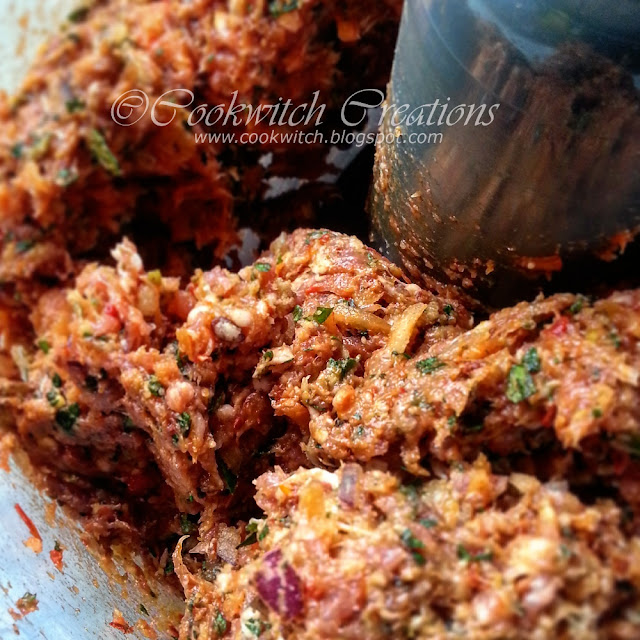 Once everything is combined, push it into all the crevices of the peppers, and then mound slightly in the centre. 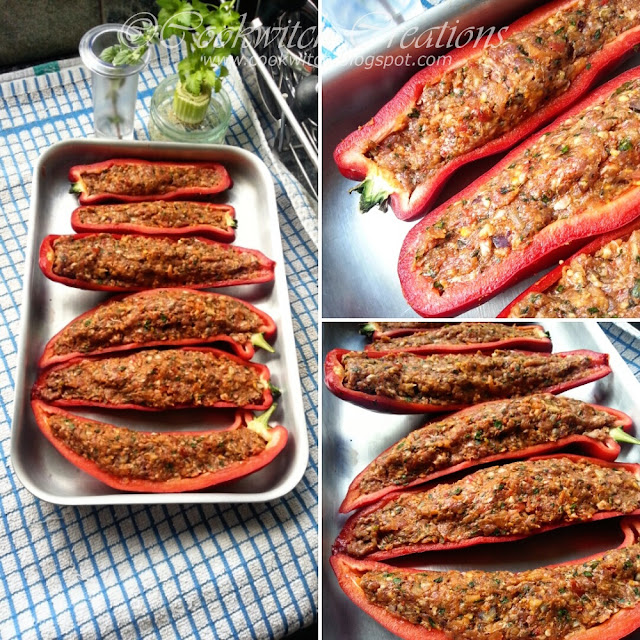 Place the stuffed peppers in a baking tray with sides, drizzle with olive oil, and then bake at 170C fan for half an hour. The peppers will wilt slightly, and the filling will shrink inside the cases. 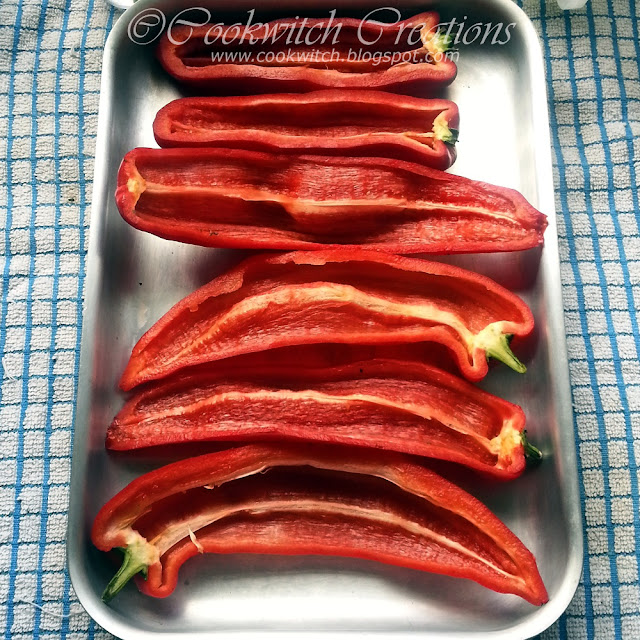 5 minutes before the end of the cooking time, I crumbled over some feta, drizzled that with olive oil, and topped with a bit more pul biber. 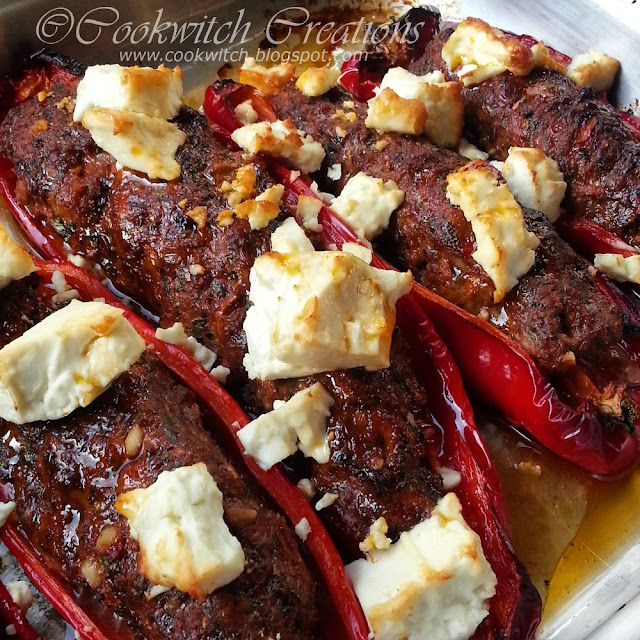 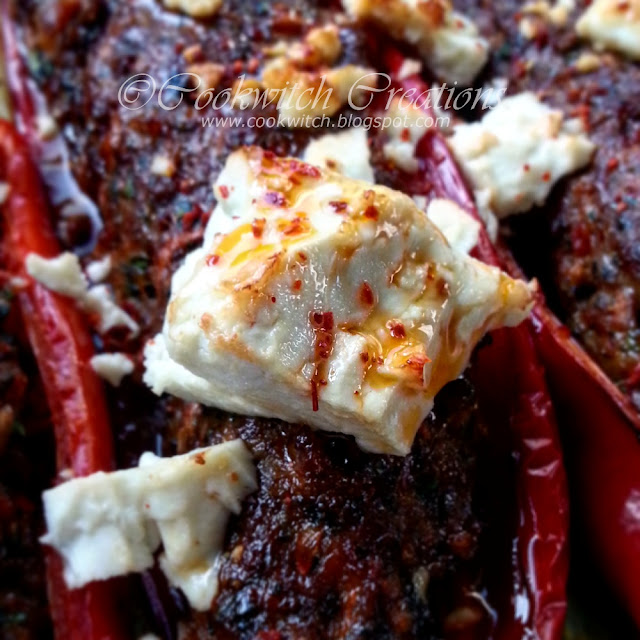 Lovely to eat hot, and equally as good cold – though I let them come to room temperature first.

I’ve successfully fed two colleagues and me with these!
Posted by Lisa Cookwitch at 9:41 pm 2 comments:

Well no, not actual aubergine marmite (though...hmm....) but aubergine really is the marmite of the food world.

The amount of people that loathe it, and the amount that adore it, seems to be about equal amongst my friends and, to be honest, given how I have had it cooked in this country, I can see exactly why people hate it. If I didn't know just how lovely it can be, and had only had past restaurant versions of it, I'd steer well clear too.

I'm very lucky. I was brought up eating the well cooked, silky version. The kind where the flesh of the vegetable almost disappears into the dish it's in, or else is the smokey, garlicky staple into which you repeatedly dip your bread because you can't get enough.

I will readily admit that there are problems with aubergines.

Sponges, soaking up oil like there's no tomorrow, worse even than mushrooms and thrice as rubbery.

The whole point is that they cook down, and that you must cook them for twice as long as you think you should. Also, that oil? Make sure that it is a good, well flavoured one, because it becomes a part of the taste of the dish, not just an unguent.

Salt is important. These days not so much to draw the bitterness out, as that seems to have been bred out over the years (except from the tiny pea sized Thai ones), but to draw the moisture out. If you want to grill them till they are crisp, salt them first, then wipe the salt off, and pat them dry with a kitchen towel. Don't add any more salt, obviously, as they probably won't need it, but you can salt afterwards if you like. You can add, but you cannot take away, when it comes to salt.

I will eat them any way I can get them, but one of my favourite ways, and one of the most simple, is just to roast them with olive oil and salt. That's it. I also add honey sometimes, and cinnamon, but they are good just on their own.

Take one large purple aubergine. Or cosh, as my husband calls them.

Cut it in half lengthways, then make scores into the flesh with a sharp knife - but do not pierce down through the dark skin.

Liberally douse the cut side with decent olive oil. Remember, the oil is a part of the dish. 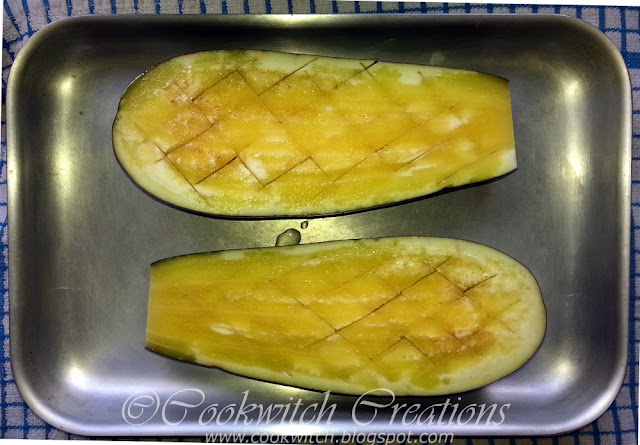 Sprinkle with salt, place on a baking tray with sides, and set to roast in a 170C fan oven.

After 15 minutes, give them a check. They should have started to brown a little.

Pop them back in for another 15 minutes.

After this set of 15 minutes is where I would add honey, sea salt and cinnamon. You do not have to do this. You can just roast them as they are, and then eat with a smattering of sea salt. 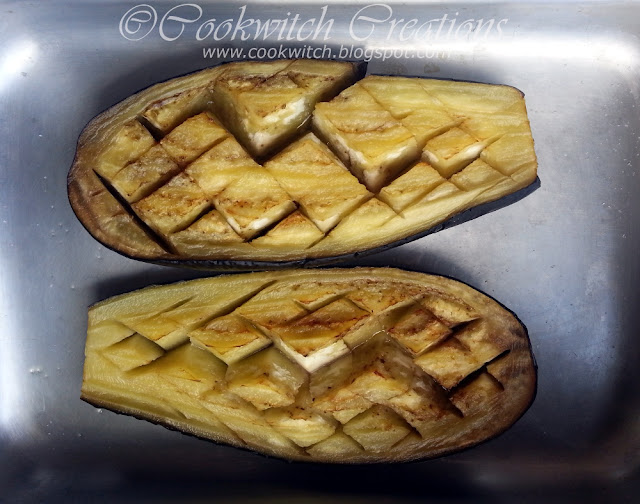 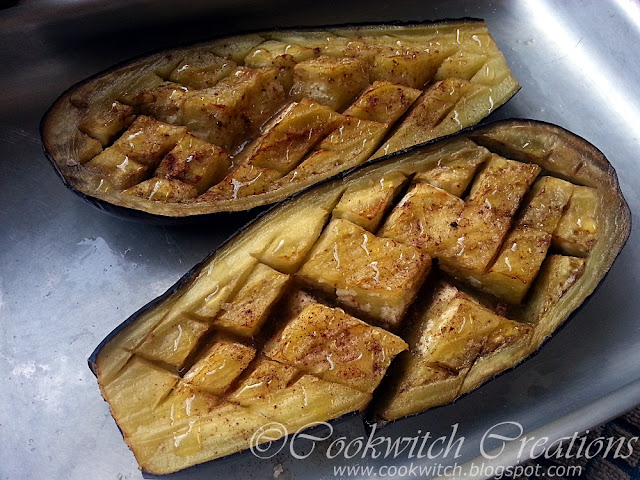 If you choose the No Honey way, then roast them until they are a deep, golden brown, and the slits have opened up. This may take longer than you think. It does depend on the aubergine.

If you do add honey, roast them until the honey has caramelised, and the slits have opened up.

My aubergines today were quite large, and also quite watery, so I had to turn the grill on for 5 minutes to finish off the browning process, but usually I do not have to do that. I think, all in all, it took 45 minutes including faff time. 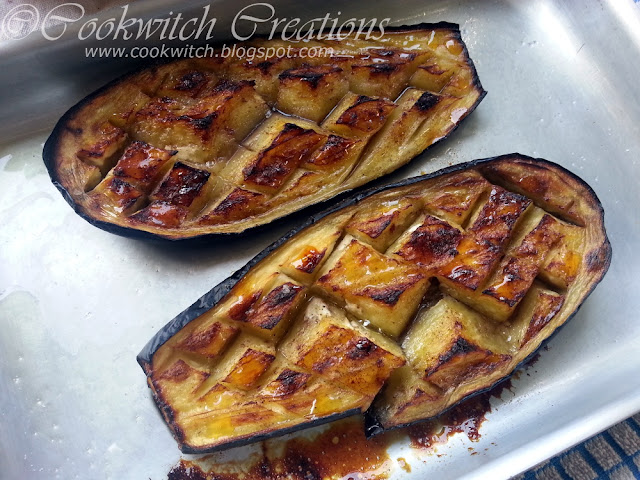 These are good hot or cold, but I like them at room temperature, eaten as a side with meat, or just on their own with some good bread and feta cheese.

You can wait until they are cooled, chop them up and add to couscous or rice if you like.